Skip to content
You are here:Home / Top 10 Unusual But Popular Baby Names In Australia in 2020 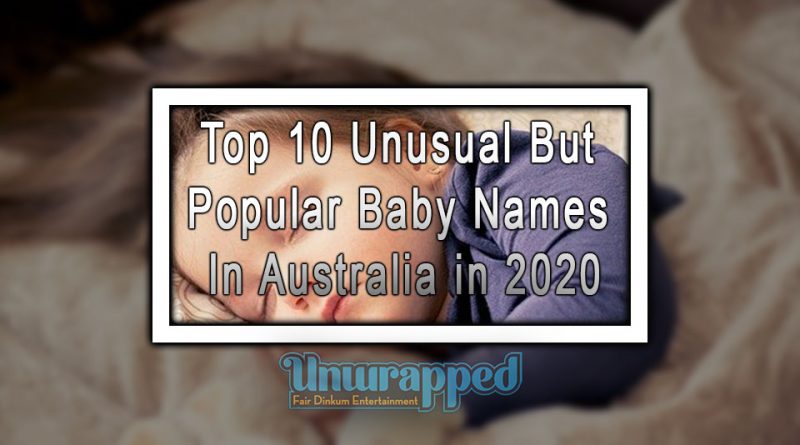 Adorably Awesome Baby Names from the Land Down Under

Towering and fiddly though but naming your child is a riveting task. What’s interesting about this naming task is that you can name your child after showbiz personalities, sports stars, music icons, popular authors and other notable figures or places. Such fashionable names can get their uniqueness through idiosyncratic spellings or embedded punctuation marks. Talking about Australia, Aussies pay great regard to traditional names rather than trendy ones. With the “100-year return” theme, top Biblical names from the preceding century are getting famous again such as Peter, Jennifer or Karen. Parents these days have access to a whole world of information which inundates them with volumes and volumes of naming options along with meanings. Here, we have made the job easy for parents by compiling the top most popular yet unique baby names in Australia. Let’s have a look at our curated list of names:

A brawny and jaunty name, Bauer makes a lasting impression on anyone who hears this name. The origin of the name can be traced back to Germany where it was a status name for pheasants in old times. It has variable meanings like a peasant, neighbour or fellow citizen. The name gained its popularity from the hit TV series 24 where the famous Kiefer Sutherland played Jack Bauer. The name also has got an athletic connection due to Bauer famous brand of hockey equipment – one of the top five brands making hockey equipment. You will feel proud to call your baby boy Bauer and just to make it unique, you can use any of the different spellings like Bauer, Baur, Bower, Bauerre, Boerema, Burr or whatever you find cool. Won’t you feel excited to pair your baby’s name with any of the exciting surnames like Shepherd, Trevor, Wells, Tanner or Bowen? What else could be a better name for your boy who is both assertive yet charismatic!

Wren is a beautiful name that reminds one of the songbirds, rhymes, fairy tales and meadows. Derived from nature, it is a name of a family of small brownish oscine signing birds especially the commonly found bird with a short tail (Troglodytes troglodytes) which is famed for its beautiful melodious songs. The name is known to have been derived from old English name Wroenna or Wrenna. It is usually a surname perhaps inspired from the well-famed British architect Christopher Wren, who legendarily restored London after most of it perished in a fire in the 17th century. Let’s just quickly go through some other famous figures surnamed Wren: Alan Wren (English rock drummer); John Wren (Australian businessman); M. K. Wren (American author); Thomas Wren (American politician); Wren Blackberry (American teacher and author); Wren Blair (former Canadian ice hockey coach); Bob Wren (Canadian ice hockey player); and Frank Wren (American baseball executive). It is equally and even more beautiful as a first name. A delicate, poetic and lyrical name for baby girls, Wren can be the best option for parents who love and appreciate nature.

The name which will turn the heads because of its distinctiveness, Tukker is topping the charts of best Aussie names. A name with a “K” in it already makes it unique and such a biker name reflects boldness and strength. A popular surname-cum-first name, Tukker will impart valuable and praiseworthy characteristics to your child: sensitivity, affection, imagination, spiritualism, selflessness, and creativity. Anglo-Saxons commonly used this name as a surname and traditionally spelled it, Tucker. Let’s find a showbiz connection for the name: the role of famous detective James Carter in Brett Ratner’s popular “Rush Hour” film series was played by Chris Tucker. What’s more the host of the celebrated Tucker Carlson Tonight, Tucker Carlson has also increased the popularity of the name. The well-famed musical duo Sofi Tukker has added more to the plate and made the name popular with its new spellings having two Ks. A slightly jittery and unique masculine name, Tukker hits all marks.

A beautiful name with a beautiful meaning, Rowan could be the first name choice for your daughter as it will remind you of a little red riding hood. Interestingly, it is a unisex name with its roots in Ireland and Scotland. It is inspired by the “ash tree” that blooms red berries and white flowers, hence the name means “little red-haired one”. The ash tree had been considered holy and protective against evil for many thousands of years. So, the name might have an influence on your child and protect him/her from evil and bad luck. Rowan as a name gained popularity when the iconic Brooke Shields named her daughter Rowan who aptly has red hair. Let me give you some more inspiration: son-in-law of the former Australian Prime Minister John Howard is Rowan McDonald; Rowan Scarborough is the political reporter and columnist; Rowan Woods is a well-famed film director; and last but not the least, the famous comedian, actor, and writer, Mr Bean was named Rowan Atkinson by his parents. Either you spell it as Ruadh or Roan; it is a name that is popular yet elegant.

Read More: What’s in a name – Free images of Children’s names and meaning

Your child will thank you for naming him after the famous Prince from every child’s favourite “Chronicles of Narnia” series. Name’s history and origin play a vital role in the life of a person as it is called every single day. If we dig into Caspian’s history, we will find its relevance to many things. Quite easy to remember due to its relevance with the famous Sea, Caspian is the name with English origin meaning “from Qazvin, Iran”. The famous horse breed from Iran – Caspian horse – is another reason to name your child Caspian. Your child’s fondness for horses will increase his love for the name. Popular for many years, the name is still flying high on the radar. Such an aristocratic and posh English name is attracting quite a lot of attention among parents. James, Oberon, Vincent, Henry, Owen, Timothy, David and Julius are few trendy names to go along with Caspian.

A very noble alternative to common names like Emma and Emily, Emme is a feminine name meaning universal, immense, complete, entire or whole. Derived from the old French and German name Emma, this name came to limelight when the plus-size supermodel and body image advocate Melissa Aronson introduced herself as Emme. Pronounced as Eh-mee, it could be an adorable nickname for Emmeline. The celebrated world-famous star, Jennifer Lopez named her daughter Emme. Also, the popular Hong Kong-based, Cantopop singer and actress, is Emme Wong Yee-Man. A playful and jovial name, the trend for a name like Emme will continue to flourish in the years to come.

An endearing Persian name, Jasper means (bringer of) treasurer. The study of medieval tradition tells us that the name was given to one of the clever men who visited newborn Jesus and brought presents for the infant. Since the Middle Ages, the name is common in English speaking countries. Some etymologists also relate the origin of the name to the gemstone of Semitic origin called Jasper. The name will soon top the charts of popular baby boy names starting with J and replace the typical names like John. It is a slightly snobbish, modish and unique name which has gained popularity since the Twilight series. And who doesn’t know the famous Tom Cat from Tom and Jerry cartoons? Well, the irritating cat was called Jasper. The animated TV series Simpsons featured Jasper Beardley. Jasper Carrott (British comedian); Jasper Fforde (British novelist); Jasper Maskelyne (British stage magician); Jasper Wolfe (Irish politician); Jasper Pittard (Australian rules footballer); and Jasper Becker (British author, commentator, and journalist) are few of the celebrated figures named Jasper.

Read More: 10 Baby Names Set to be Popular in Australia 2020

An adorable musical name with mythical roots, Evangeline could be the best choice for your daughter’s name. The beauty of the name will turn the heads of many. The meaning is as attractive as the moniker itself. The meaning of the name is the conveyer of good news or angel-like. It can be shortened to Eva. The famous tale by Henry Wadsworth Longfellow tells the story of an Acadian woman called Evangeline who went in search of her lost love. Eva was a character in the novel “Uncle Tom’s Cabin” written by Harriet Beecher Stowe. Most popularly, we know this name from the adventurous film series the Hobbit where Nicole Evangeline Lilly, a Canadian actress, dexterously played the Elf character.

Something must click you when you say, Harper! It brings to my mind the famous novel “To Kill a Mockingbird” written by Harper Lee. It is a common yet famous unisex name in English speaking countries that sounds business-like and means “Harp player”. Well-famed figures named Harper include Harper Grace (daughter of Actor Neil Patrick Harris) and Harper Seven Beckham (daughter of English Victoria and David Beckham). Fictional characters with the same name are Harper Finkle of “The Wizards of Waverly Place” sitcom and Harper Connelly of Harper Connelly Mysteries novels.

Floral names are ever-green and constantly enjoy being in the spotlight. So is the case with Dahlia which has its roots to Anders Dahl – Swedish botanist – after whom Dahlia was named. Sometimes, Dahlia is also referred to as “valley flower”. Dalyah is a Hebrew word meaning “flowering branch”. Dahlia symbolizes dignity and elegance in the Victorian language of flowers. The beautiful flower perfectly translates into an adorable name for a cute little yet sophisticated girl. Multi-talented, idealistic, intuitive, independent and perfect are some attributes of the name Dahlia. In the years to follow, the name will gain popularity as one of the most endearing floral girl names.

Read More: Top 10 Flora And Fauna In Australia To Explore In 2020

Naming your child might be the biggest ever decision of your life which will ultimately affect your child’s life, attitude, character, and persona. Best Aussie monikers don’t change so frequently with few amendments in the list every now and then as Australians prefer a more traditional name for their child. If you are confused about what name should you select for your baby, then check these top baby boy and girl names and fascinate your peers with your child’s distinctive yet cool name.

Top 10 Japanese Restaurants in Melbourne in 2020