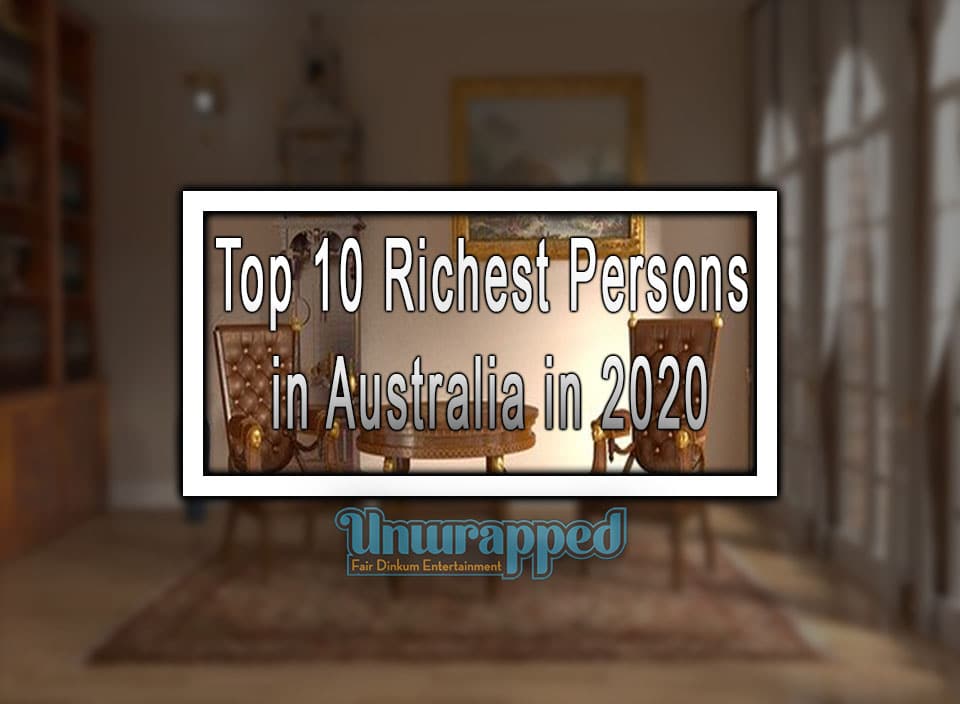 Richest Persons in Australia – Do you sometimes dream of being a billionaire and managing an immense amount of money? Then you must have wondered who the richest people in Australia actually are, you know the ones that have actual, and not fictional billions at their disposal and influence the livelihoods of thousands of employees. Well here’s a list of the top 10 richest persons in Australia so you don’t have to wonder who they are anymore.

Gina Rinehart proves that women can be just as successful as men, and then some. She has been the richest Australian citizen from 2011 to 2015 when she also took the title of the richest woman in the world. Her wealth has been dropping since 2015 due to a stagnation of Australia’s mining sector, but still remains immense and sits at 14.8 billion US$ in 2019.
Most of Gina Rinehart’s wealth comes from the iron-ore industry but she has also numerous other interests including cattle and the media. Unlike many rich women around the world, Gina Rinehart didn’t simply marry into wealth or inherit it. Admittedly her father Lang Hancock was a high profile iron-ore explorer but left her with a bankrupt estate that Gina managed to rebuild into something mach larger and more successful.

Although he wasn’t born in Australia but in China, and his parents are actually Russian, Harry Triguboff emigrated to Australia in his teens and managed to build some truly awe-inspiring wealth. He has built his wealth in real-estate and earned himself the nickname “High Rise Harry” by transforming the real-estate market of Sydney with high-density living options that managed to push out the previously dominant freestanding homes.
During his career Harry Triguboff managed to bring more than 75.000 thousand individual apartments to the Australian real-estate market. His current net worth of 9 billion US dollars will likely continue to increase as Trigouboffs apartment-tower development company is still seeing very strong demand.

Anthony Pratt is the chairman of Visy Asia-Pacific, which is by far Australia’s largest privately owned company. Visy Asia-Pacific is a packaging and recycling business that we set up way back in 1948 by Pratt’s grandfather and further expanded and strengthened by Richard Pratt, Anthony’s late father. Visy has more than 120 sites across Australia, New Zealand and Thailand as well as offices across Asia, Europe and the USA. Additionally, Prat is the owner of the largest U.S. based manufacturer of corrugated cardboard products, Atlanta’s Pratt Industries. Anthony’s Pratt current net worth amounts to $6.8 billion.

Many will remember the day when Lowy sold his Westfield Corp. one of Australia’s largest conglomerates ever, to a Franco-Dutch group in Australia’s largest ever $16 billion deal, as the end of an era. But Lowy has always been a fighter and going through Australia’s largest takeover was just one of the many achievements of his career. A holocaust survivor that started way back in 1959 with what eventually became one of the world’s largest mall business, Lowy’s net worth today stands at an impressive 6.5 billion US$. He’s main business today is taking care of his family owned investment house, the Lowy Family Group.

5. and 6. Scott Farquhar and Mike Cannon-Brookes

Both Mike Cannon-Brookes and Scott Farquhar are the cofounders of a massively successful and now well known software company Atlassian. The pair are by far the youngest on this list of billionaires and they started their company right after graduating from college with money they pulled from their credit cards. Today, Atlassian works with companies such as NASA, Tesla and SpaceX. Both Cannon Brookes and Furquhar are not just successful but are a new generation of billionaires that use their wealth to advocate environmental sustainability and charitable causes. Scott Farquhar and Mike Cannon-Brookes’ respective wealth currently stands at 6.4 billion US$.

A fellow miner like Rinehart, Andrew Forrest started his mining company back in the 90s. Almost a decade later he founded the Fortescue Metals Group which is one of the largest suppliers of iron ore to China. Just like Rinehart today, Forrest used to be Australia’s richest person back in 2008, when he peaked at 12.7 billion US$. Today Andre Forrest stands at a more modest 4.3 billion US $

Chadstone, one of the world’s largest shopping mall chains with more than 500 stores in eastern Melbourne alone is Gandel’s golden goose and main source of wealth today. He owns half of Chadstone, but also has a large stake in the Vicinity Centers listed properly trust, which confusingly enough, owns the other half of Chadstone. However the actual source of his wealth started way back in the 80s when according to Gandel himself ” shopping became a leisure activity”. John Gandel’s current net worth amounts to 4 billion US$

James Packer’s money comes from money, well people gambling away their money to be more precise, as he is the largest shareholder of Crown Resorts , which owns multiple large volume casinos in Australia and the UK. He inherited the casino empire from Kerry, his late father but has interestingly enough stepped down from the board of Crown Resorts. His wealth currently stands at 3.6 billion US$.

Lindsay Fox is the owner of Linfox, Australia’s largest private company dealing with logistics. Linfox currently has more than five thousand tracks across 12 countries. Additionally the company can boast with a very large and diverse property portfolio which includes shares in a business park, airports and a currency management outfit. Although last on this last Fox’s net worth is still a very impressive 3.5 billion US $.

So now you know who the richest persons in Australia are in 2019. Will their wealth increase or decrease , and will everyone still maintain the same rank on this billionaire bonanza? Only time will tell.

Who is the richest person in Sydney?

For the second year running, the booming price of Australian iron ore has put Gina Rinehart at No. 1; her $31.06 billion fortune up from $28.9 billion in the 2020 list published in November.