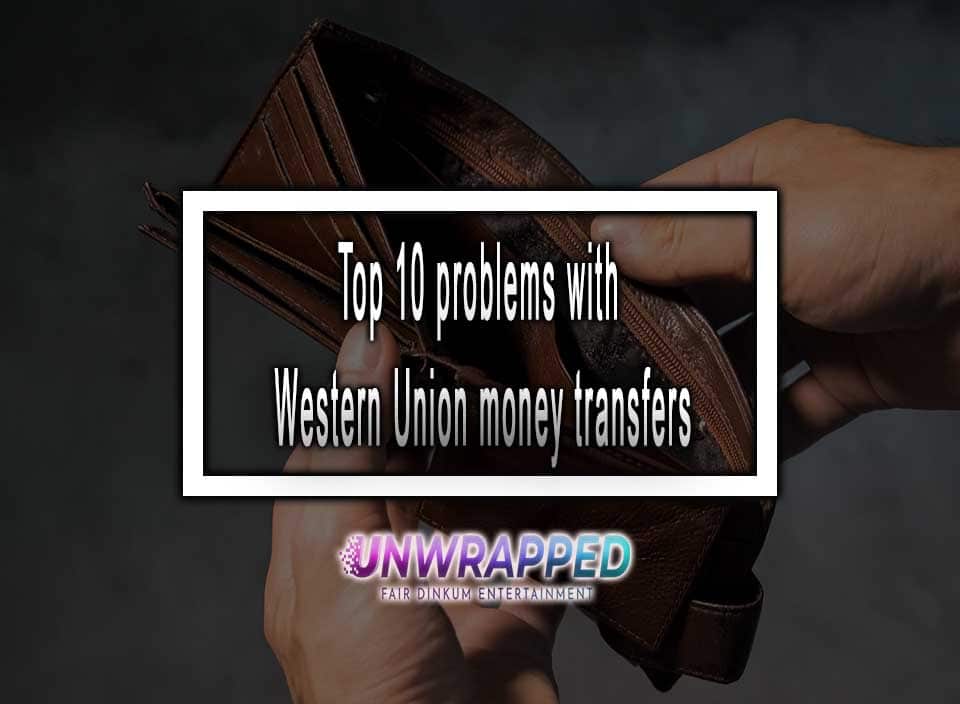 Western Union is a well-known money transfer company, and its large market share allows it to impose its own restrictions and fees on clients. Western Union’s many divisions provide services such as person-to-person money transfers, money orders, business payments, and commercial services. There were standard Cablegrams as well as more cheerful products like candy grams, Dolly grams, and Melody grams.

1. Expensive option to transfer money in a hurry

It is an often expensive option for people who need to transfer money in a hurry. When transferring money a fee is needed to pay depending on different factors such as; transfer fee, intermediary bank fee, exchange rate, and other additional fees whether it be a cancellation fee, online fee and., etc. especially when you only have limited money, therefore, making you unable to transfer the needed amount to the receiver on time. Sometimes western unions have higher cable charges than other money transfers. Out of western union’s competitors, western union is the most expensive method to use to transfer money.

Commercially, it has limited utility and is better suited to personal use. Deposits, loans, checking account services, and other fundamental financial goods are not available. Westernunion is best recognized for its financial services money transmitters. As a result, they miss out on additional benefits.

When transferring money using Western Union, there are a few things to keep in mind. Western Union will charge a fee, such as 10% for a modest transaction. However, the higher the fee, the smaller the percentage, and the more you submit, the higher the fee. When someone needs money fast but can’t utilize a bank transfer for some reason, they can go to a Western Union facility and send cash. Western Union offices are typically found in grocery stores or cash advance businesses. Some consumers can send money via the internet. You will be given a control number, which you must give to the person receiving the cash, who will then use it along with their ID card to collect the money from a Western Union collection agent.

Fees for sending money to affluent countries will be higher. Exchange rates do not seem to favor senders also, so if a country’s currency is losing ground against the US dollar. Western Union profits from currency exchange as well. Furthermore, Western Union may conduct additional checks to verify that its customers are not utilizing the service for fraud or money laundering.

When transferring money online, you must go through a lengthy procedure that may cause payment delays, or at times lead to the service becoming unavailable due to certain factors such as the amount sent, identification requirements, country, currency availability, destination, regulatory issues, Agent location hours, selection of delayed options, or time zone differences. Furthermore, the maximum send limit per card account is $500 per day. A maximum of $2,500.00 can be sent per internet money transfer.

The buttons at the top of the site are all you need if all you need to do is send money, pay a bill, track a transfer, or pick up cash. If you want more information, you’ll have to put in a bit more effort. As a result, it’s difficult to navigate the website when you need help.

Western Union includes a disclaimer that indicates the company is not liable if the receiver does not get the things or if they arrive in less-than-satisfactory condition. Even if their agents were inattentive during delivery, it absolves them of culpability. That implies that if your account provider does not honor the transactions, the transactions are not executed, or the transactions are returned, Western Union will not be held liable. Western Union has been used by scammers to obtain payments from their victims. WU is aware of these con artists and warns us about the risk of a fraudulent transaction. Western Union also specifies in their privacy policy that they gather and share personal information to other parties.

If the Receiver rejects your cash, Western Union will charge you a fee to cover the cost of the transfer. Western Union may grant a transfer charge refund if money is not available within the specified timeframe. Western Union will charge you $15 if you have a receipt; if you don’t, you will be charged $30. Furthermore, receiving your money by bank account transfer might take up to seven days. Due to a cause where your transaction was failed, you may not be able to recover the entire amount of what you used to send when refunding, making the experience all the more unpleasant.

Many people believe Western Union’s customer service might be better. There have been a few cases where mathematical errors have occurred. People have also had the misfortune of exchanging the incorrect currency. Others see that their money has been taken by an unidentified individual. If you had an issue with a remittance, Western Union would put you on wait for up to 14 days while they investigated if fraud was being committed, and you’d have to divulge much too much personal information merely to transfer money to a family member or in an emergency. They’ll want to know about the money’s origin, the reason for sending/receiving it, and the relationship between the sender and the receiver. This can happen if the receiver’s name appears on the sanctions list, despite the fact that many individuals have very similar surnames, which makes it inconvenient. The process of moving funds becomes much more time intensive, resulting in lost time. Western Union’s customer service isn’t the best, and they’re not really helpful. To utilize Western Union’s services, you must first register with the company and go through a number of verification procedures.

Subject to Restrictions, online bank transfers and bill payments will normally be credited to qualified bank accounts at destination banks within 5 banking days of the money being sent. Only transfers sent within the continental United States are eligible for next-day collection. When compared to other financial money transfer businesses, Western Union takes longer to process international money transfers. The procedure takes time and is not suited if you need to send money quickly.

Western union is a method of transferring money from one person to another and from one location to another, primarily for those who do not have access to standard banking services. However, there are many alternatives as Western Union which can provide much more reliable customer service, quick transfers, and inexpensive.

How can the healthcare industry benefit from cryptocurrency?