Skip to content
You are here:Home / Top 10 Obscure Facts About Australia In 2020 You Did Not Know 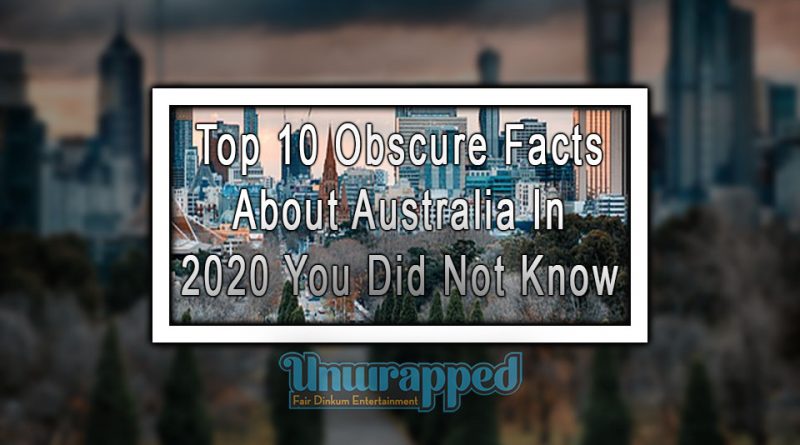 10 Unknown Facts About Australia That Will Facinate You

Australia is a country as well as a continent. We can say that Australia is the only continent represents only one country. There are many unique and beautiful places in Australia including natural landscapes and manmade wonders. It surely is worth visiting place for travellers. Culture, people, landmarks, and animals, everything in Australia has a story behind, sometimes untold. The iconic landmarks and amazing biodiversity of the area are a feast for eyes and souls. So if you are planning to visit Australia in 2020, there are some hidden facts about Australia which you should know so that you can get more fascinated with the magic of this place.

The unique wildlife of Australia is famous around the world and some of the facts behind this wildlife are still unknown to most of the people. It is said that the sheep population in Australia is at least three times more than the human population living there. The largest flightless bird in Australia, the Australian Emu has a running speed of more than 45 kilometres per hour. We have heard about Australian platypus, but we do not know that they are highly poisonous and their poison is fatal for dogs and very harmful for humans. The shape of the poo of Wombat is a cube. There is a box jellyfish in the waters of Whitsunday Islands and the Great Barrier Reef, it is said that this jellyfish is so toxic that it has caused more deaths than snakes, sharks, and saltwater crocodiles together. When we talk about the wildlife of Australia, it is impossible not to talk about kangaroos. In Australia the highest recorded jump of a kangaroo is 9 meters in a single leap. The Platypus and Echidnas, native to Australia, are known to be the only two mammals which lay eggs. An interesting fact about Koala is that they can sleep for as long as 20 hours a day. Among all the mammals the strongest bite per body size is that of Tasmanian Devils. The unique wildlife with its unique facts makes exploring the country even more interesting.

If you live in Australia and above 18 years of age, you must know that you do not have a choice to not vote. Voting in Australia is compulsory for every adult person. There is a starting fine of 72 AUD for not voting, despite these facts only 81% adult Australians cast vote. In 1894, Australia gave women their right to cast a vote, becoming the second country in the world to do so. An interesting fact about the Australian government is that in 2005, the government banned saying the word ‘mate’ in Parliament, the ban, however, was lifted just in 24 hours. For 64 years, it was illegal in Australia to swim at public beaches during the day time. If you are under 18, you are not allowed to drink, because it is an illegal age for drinking in the country. And one of the most interesting facts about the laws in Australia is that the first Australian police force constituted of 12 convicts who were found to be the best-behaved men.

Like the country, its landscapes and its wildlife, there are some obscure facts about Australian people too. One of the most interesting facts about Aussies is that more than 49% of Australian people were actually born overseas or at least one of their parent was born overseas and then moved to Australia. People from different cities within Australia are called differently, for example, people from Sydney are known as Sydney-siders whereas those from Melbourne are known as Melbournian. The majority area of interior Australia is a vast desert hence despite being a mighty continent, more than 90% of people in Australia live near the coastal regions or cities. In January 2017, the former Australian Prime Minister Bob Hawke held the Guinness Book world record for fastest beer sculling as he drank 2.5 pints of beer in just 11 seconds of time.

If you are a native to Australia, you might have seen kangaroos of different sizes and colours that is because there are a total of 4 different species of kangaroos in Australia, out of which Red Kangaroo is the largest. If you are not a fan of reptiles, then we hope you do not ever come across to an Australian Thorny Devil which is the longest lived lizard of its size in Australia and can live as much as 20 years, and snakes, because 17 of the world’s most poisonous snakes are found in Australia. Another interesting fact about Kangaroos is that they are among the two animals, second being the Emu, which was selected for Australian Coat of Arms for the reason that they cannot walk backward. This reflects that Aussies have a culture of forwarding thinking. As if Australian reptiles were not enough for the horror, we bring to you arachnids and arthropods. Australia is home to more than 1500 types of spiders, some of which are deadly, 400 types of ants and more than 350 species of termites.

The settlement of aboriginal people of Australia dates back to around 50,000 years old, however, they just make 1.5% of the total Australian population. Being one of the largest countries in size, Australia has the lowest population density in the world, although it is just a little smaller than the United States of America when compared, Australia has a population of 23 million whereas the United States has a population of 313 million. An average Australian person eats an average of 18 full cows and 90 full sheep during the 80 years of his life. Australia is known to be home to the best beers in the world and hence Aussies are beer lovers. On average an Aussie drinks more than 83 litres of beer every year. Melbourne is home to the world’s second-largest Greek population. Knowing facts about Australian people and the culture is very important for your visit to Australia in 2020 because it will help you in easy mingling.

When you look at the Lake Hillier from distance, you will feel like it is a swamp of solid bubblegum pink colour, such as the colour of this natural lake. And when you come closer to the lake, you will find out that the water is actually translucent, but is pink in colour. You surely will not believe, what you are seeing. The reason behind such bubblegum pink colour of this lake is still unknown, however, the mysteries of some other pink-coloured lakes including Senegal’s Lake Retba have been solved. But there are different theories about the reason behind this amazing pink colour of the lake. Some scientists claim that the colour of the lake is due to the presence of high salt levels in water and salt-loving algae Dunaliella salina. Other pinks lakes around the world, change their colour according to different weathers and temperatures, however, the colour of Lake Hillier always remains the same. Even if you bottle the water, its colour remains the same. Although research has been performed on the water and it does not harm humans in any way, swimming is not allowed in this water. You can admire the beauty of this lake through helicopter ride from above because this island is solely meant for research purposes.

If you have been to Gippsland lake in summers, then you would have seen this phenomenon, which first started in 2008, where you can observe faint blue light at night. As a result of a series of bush fires in 2006 and torrential rains in 2007, a large amount of ash, as well as nitrogen rich soil, got dumped in the Gippsland lake located in Southeast Australia. Usually such kind of dump results in the bloom of bacterial population, but nature has its own ways of being marvellous. A massive bloom of Noctiluca Scintillans started growing in the lake, which can be observed as red patches on the surface of water during the day times and interestingly this alga glows at night. Anyone who takes a dip in this water during night can experience the spectacular view of glowing water around them. Although the bioluminescence has lessened as the time passed, it still happens sometimes and you will be amazed looking at it. If you want to swim in the Gippsland Lake during a summer night, you can easily experience this faint glow till now.

Talking about Bioluminescence, Gippsland Lake is not the only place to glow. We have an abandoned railroad tunnel that also is now filled with bioluminescent bugs and glow at night. The drowned railroad tracks can take you to an abandoned passageway covered with greenery. When you get into this otherwise dark tunnel, there will be no darkness because of the illumination of enchanting blue glow. This tunnel is known as the Metropolitan tunnel and was built in 1880s, however, it got closed in 1915. This tunnel since closed got hidden by amazing flora, till 1995, after which it was partially cleared and then it was found that the passageway is filled with stagnant water, which led to the growth of glowworms. These insects now illuminate the tunnel and it looks like we are in the galaxy of blue and green stars.

You will not believe but Melbourne hosts a creepy and haunted bookshop. The shop is filled with vague stuff and literature. It is said that the books in this bookshop include haunted topics like magic, witchcraft, Divination, Satanism, vampires, ghosts, aliens and much more. It is filled with dark arts, but we don’t know maybe it is one of the shops from Diagon Alley and muggles are unable to understand it. Anyways we can roam around in this book shop, and maybe we are lucky enough to find something for Hogwarts too.

The Ball’s Pyramid is natural habitat to the rarest insect of the world. It is a barren sea spire and is known to be the part of the lost continent of Zealandia. The Ball’s pyramid is actually the remains of a mighty volcano in the Pacific Ocean. It has a height of 1,843 feet. It is located at a distance of 23 kilometres to the east of Lord Howe Island. It rises 500 meters above sea level and has a total length of 1.1 kilometres. The amazing rock formation is also visible from the Mount Gower Track on Lord Howe Island. There are 27 insect species inhabiting in this place and these are the rarest species in this world. Now these species are breeding in captivity.

Read More: Top 10 Things to Do and See at Sydney’s Bondi Beach

The country of Oz is a very fascinating place. Besides its exotic biodiversity, its incredible landscape, nightlife, Australia is home to some of the most mysterious things in the world. The buildings and landmarks in Australia are very famous among tourists and travellers.

Also See : The Real Cost of Covid-19 To the Australian Economy

The Wackiest Products You Can Buy Online During the Lockdown 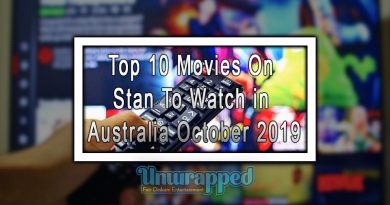 Top 10 Movies on Stan To Watch in Australia October 2019 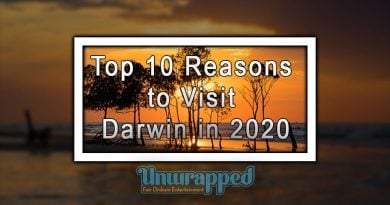 Australia’s 10 Haunted Places That Will Curdle Your Blood