Top 10 Natural Highlights in Australia in 2023 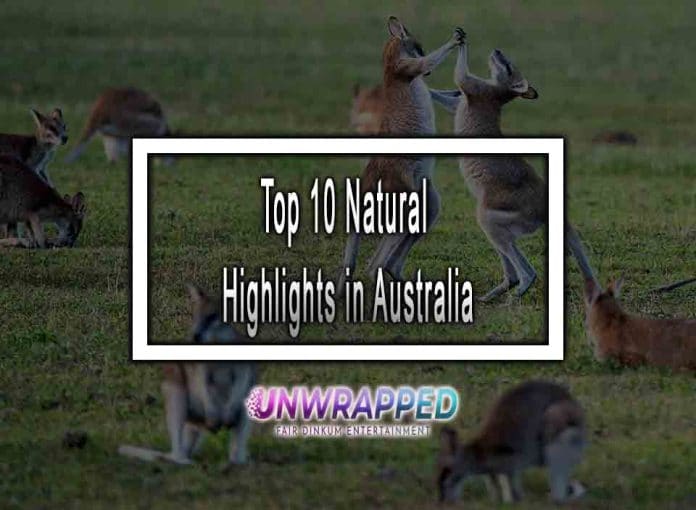 Australia is a country of wonders. If you have been to Australia, you would know the country is filled with nature in its most pristine and beautiful form. The article tends to cover the most famous 10 natural highlights of Australia. So, plan your trip to Australia in 2023 and observe these breathtaking wonders with your own eyes.

The Great Barrier Reef is interestingly the only living thing on earth, which is visible from space. The reef is expected to be born at least 25 million years ago. The Great Barrier reef is known to be the world’s largest reef system as it spreads about 3000 kilometres from the coast of Queensland. This reef is made up of more than 400 types of corals and is home to around 1500 species of tropical fish. Since enhanced pollution and tourism is becoming a threat to this beautiful and precious wonder, efforts have been made to preserve it in its form.

Another natural wonder of Australia is Uluru, also known as Ayers Rock. The Uluru is famous for its changing shades. It is also a place of spirituality for Anangu people. You can walk around the base track to look at the geology of rock and examine the flora and fauna which is surviving in that environment. Uluru is said to be created due to the conditions of the region. Anyhow it does not matter how it was formed, the only thing that matters is that this beauty is standing alone in these arid conditions for you to visit.

The 12 Apostles, which are now only eight left are also among the natural wonders of Australia. They are formed due to the erosion of the limestone rocks. The 12 Apostles are visible from the Great Ocean Road at the Victorian Coast. Although, they are named as 12 Apostles, but they were originally only 9 and after erosion and recent fall, only eight are left. It is known that the base of these apostles erodes at a rate of 2 centimetres a year.

When you go towards the north of Perth on the western coast of Australia, after around 800 kilometres, you will find this natural wonder. The shark bay is in W-shape and is basically a coastline of rocky limestones, white sand dunes and cliffs. This coastline is 1500 kilometres long. The shark bay is known to consist of a number of shallow peninsulas. It is also a natural habitat for more than 10,000 dugongs. Many threatened species and bottlenose dolphins live in the shark bay. It is also home to the most diverse seagrass in the world. It is considered as one of the most beautiful beaches in Australia.

The Kata Tjuta or Oglas are weathered domes which are known to have risen from flat desert. These domes are situated near Uluru and are worth seeing. They are heaven for plants. The domes were once only a single rock, which was even more magical as compared to Uluru. But now that there are many, you can walk in the trails between these domes. But remember to explore the Kata Tjuta with a local expert guide. The guides will help you travel the trails and will guide you about the natural history of this forbidding area.

Another famous natural highlight of Australia is the Kakadu national park. It covers an area of around 20,000 square kilometres and constitutes tropical biodiversity. Kakadu is home to more than 1700 plant species. You can access Kakadu by travelling 171 kilometres to the southeast of Darwin. The national park also includes flood plains, tidal flats and rock country. The place is covered in aboriginal rock carvings. It is said that this place has a uranium mine. Interestingly many freshwater and saltwater crocodiles find their home in Kakadu, so when you visit the place, please be cautious.

The Pinnacles can be reached after an almost three-hour drive towards the north from Perth. The pinnacles are basically formations of limestones which were created almost 30,000 years ago. It is said that they were formed due to the deposits of seashells on the shore of the receding ocean. They are located in Nambung National park and they can be seen rising several meters from the grounds. You can also see grey kangaroos, emus and reptiles in the vicinity.

Another reef which you can find in Australia is the Ningaloo Reef. This reef is just 321 kilometres in size, much shorter as compared to the great barrier reef. But it is one of the world’s longest fringing coral reefs. The Ningaloo Reef is a natural habitat for more than 500 different species of fish and 220 species of tropical reef making corals. Enormous whales and whale sharks can also be found in this reef. It is easily accessible as you can just swim directly from the beach towards the coral reef. The clear water will make it easier for you to view the sharks, rays and other reef animals.

When you will travel towards the west of Melbourne, at approximately 235kilometres, you will reach the Grampians National Park. This national park is basically a sandstone mountain range that has risen from the plains. The Grampians National Park is home to a large number of kangaroos. A known thing about this region is its beautiful waterfalls, which is a natural wonder of Australia. Mackenzie falls are among these waterfalls and are the largest waterfall in the region. This majestic beauty has a height of 30 meters from which waterfalls to the gorge. The falls are operational throughout the year and also gives a rainbow mist in sunshine.

When we talk about the sand islands, the name of Fraser island comes in mind. It is because the island is the world’s largest sand island. It is stretched over an area of 123 kilometres in length and 22 kilometres in width. The place constitutes of rainforests, sand dunes as large as 240 meters in height, 100 freshwater lakes and beautiful wild biodiversity which includes dingoes.

Australia has unarguably some of the most eye-pleasing and natural wonders in the world. The most stunning landscapes awe-inspire the tourists from their beauty and mightiness.

The World’s 8 Most Wonderful Cities Must Visit In 2023

What To Do If You Miss a Connecting Flight