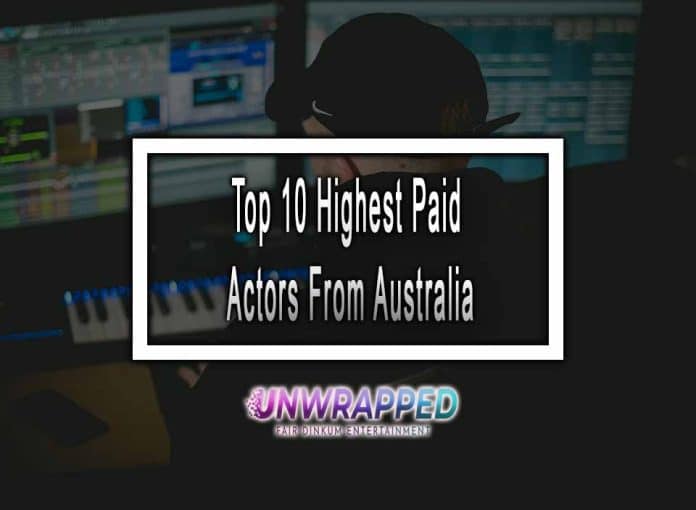 The Most Earning Actors in Australia Will Make You Feel Awed

Cinema has a beautiful involvement in our lives. All of us love movies and cinemas a little too much. Whenever we are tired of the daily routine, we make our way towards cinema houses to watch our favourite movies. There are several Australian actors, who we know to live in our hearts. Among these actors, are the highest-paid actors who are surely living the lives of their dreams. Some names of these actors might come as a surprise because we have not expected this from our stars. This article explains some of the most paid actors in Australia who are expected to bring more fame to Australia in 2020.

One of the most paid actors in Australia is our very own, loving and charming Hugh Jackman. He earns as much as 150 million dollars for a project. He is the highest-paid Australian actor in Hollywood. We love him because besides being multi-talented, he is a great showman too. Our star is famous for carrying out the most iconic roles including Wolverine in the X-Men series. Besides being a star in action movies, we can find Hugh Jackman doing romantic comedies, musicals and dramas. To his name are a Grammy and a Golden Globe for Les Miserables, a Tony award for The Boy from Oz, and an Emmy too for being a host in the Tony awards. And interestingly our love has been nominated for so many awards that we cannot make a list.

Second among the most paid actors in Australia is Nicole Kidman. She is one of the most amazing actresses in Hollywood. Besides being an excellent movie star, she also owns her production company named Blossom Films. She being an incredible actress adds credibility to movies and grabs awards for her roles. She earns around 130 million dollars for her roles. To her name is an Academy Award for the Hours, and a nomination for Academy awards for Moulin Rouge, besides multiple Emmys and Golden Globes. Started her early career in Australia, she later became a Hollywood sensation after working with Stanley Kubrick, Baz Luhrmann, and Gus Van Sant. In 2006, she stood as the highest-paid actor in the industry.

Recent history tells that Russel Crowe is the most celebrated Australian actor in Hollywood. He earns 95 million dollars for his projects. His worth in the industry has brought him, many awards. He started his early successful career in Australia on screen and stage. But later was influenced to work in North America. Some of the blockbusters to his name include The Insider, A Beautiful Mind and Gladiator. These three got consecutive nominations for Academy Awards. Besides their superb acting career, Russell Crowe is also musically gifted. He released his first single in the mid-1980s. And honestly, with all these capabilities, we know that whichever movie casts our favourite Russel Crowe, it is going to be a blockbuster.

Recent years have seen Chris Hemsworth, the brother of Liam Hemsworth gaining popularity. And all the credit for this peak popularity goes to his role as Thor in the Marvel movies. The Marvel Cinematic Universe, as well all know is so massive and lucrative that Chris Hemsworth being associated with it has got a lot of fame and money. He earns around 90 million dollars for his projects. Besides Thor, some of his other roles in Hollywood Productions have brought many names to him. He can be found in Star Trek, The Cabin in the Woods and Red Dawn. He has also been cast in the Men in Black spinoff Men in Black, which is expected to premiere this year.

In 2018, Cate Blanchett was ranked as one of the highest-paid actresses in the world by Forbes. Also, she was only Australia on top of the list. She gets as much as 85 million dollars for her projects. To her name are many of her successful performances and vast career. She also is the only Australian actress to be nominated for Academy Awards for the same role in two different movies. She starred as Queen Elizabeth I in Elizabeth as well as Elizabeth: The Golden Age. She has also won two Oscars for period drama ‘The Aviator and Woody Allen’s dark comedy ‘Blue Jasmine.

The name of Simon Baker in the list of most highly paid actors in Australia is not a surprise. He being the star of the CBS drama, The Mentalist earns around 350,000 dollars per episode. In 2010, CBS increased his salary to around 30 million dollars. Recently, he grabs around 45 million dollars for his projects. Most of his success is credited to CBS, but that does not mean that he has not worked on any other projects. He has starred in the very famous, ‘The Devil Wear Prada’ and ‘The Ring Two’. Besides these projects, Simon Baker has also worked on advertising campaigns for Longines, ANZ Bank, Samsung, and Givenchy.

Eric Bana the actor who is grabbing 40 million dollars for his projects, initially started his career in his hometown, Australia. After his successful start in Australia, he struck it big in Hollywood. His popular Australian films include ‘The Castle’ and ‘Chopper’. He has also starred in ‘Black Hawk Down’ and ‘Hulk’ in Hollywood. Eric Bana has not only acted in high budgeted films but also made appearances in low budgeted movies making him adaptable in different movies. He can act in a variety of genres including romantic comedy, action and thriller. Famous directors like Stephen Spielberg and Ridley Scott, have cast Bana in their megaprojects.

We can never forget Captain Hector Barbossa in the Pirates of the Caribbean film series. The role has been played by our very own star, Geoffrey Rush. Being famous for this role does not mean that Geoffrey Rush has not been a part of other projects. Besides terrorizing Jack Sparrow, he has done so many projects that you might get surprised. He earns 40 million dollars for his projects. Among very few actors who can win the ‘Triple Crown’ of acting awards, Rush is one of them. He has won an Academy Award for ‘Shine’. An Emmy for ‘The Life and Death of Peter Sellers, and a Tony for the play ‘Exit the King’. For nearly 40 years, Geoffrey Rush has been working tirelessly in Hollywood, bringing fame to the roles he plays on the stage and screen.

Hugo Weaving is famous for his role as Elrond in ‘The Lord of the Rings series. All the Tolkien fans recognize him very well. His role in this series has brought him up as a sought after actor which has increased his worth in the industry. He makes around 30 million dollars from his work. Besides ‘The Lord of the Rings’, Hugo Weaving has also starred in ‘The Matrix Trilogy’ and ‘Captain America: The First Avenger. The Oscar-winning ‘Happy Feet’ and its sequel film has also starred Weaving with his voice overwork. His supporting role in ‘Hacksaw Ridge’, brought him an Australian Academy of Cinema and Television Arts Award. Since he was not born in Australia, he is identified as English as well as Australian.

Our Gale Hawthrone of ‘The Hunger Games’ usually earns around 26 million dollars. Liam Hemsworth is not only famous for his acting, but also due to his now-defunct marriage with superstar Miley Cyrus. He is on the list of the most highly paid actors in Australia. Most of his earnings are due to his roles in popular productions of Hollywood including the adaptation of ‘The Last Song’, which is a novel by Nicholas Sparks. He has also starred in several Australian productions, which include ‘Neighbours’, which is a famous soap opera.

The actors who started a successful career in Australia later became Hollywood sensations and are the crowned princes of the film, television and theatre industries. These celebrities are earning millions and are fascinating to their fans. No matter how much they earn, the truth behind is they have worked hard to reach this place. Beauty with brains is all that is required to stay in this industry and conquer the field.

Who is the richest Australian entertainer?

Chris Rock addresses Will Smith Oscars drama Since 2003, the list has been ranking the wealthiest self-made Australians aged 40 and under, and for the first time ever, Canva co-founders Melanie Perkins and Clive Obrecht have come out on top with a wealth of $16.5 billion.