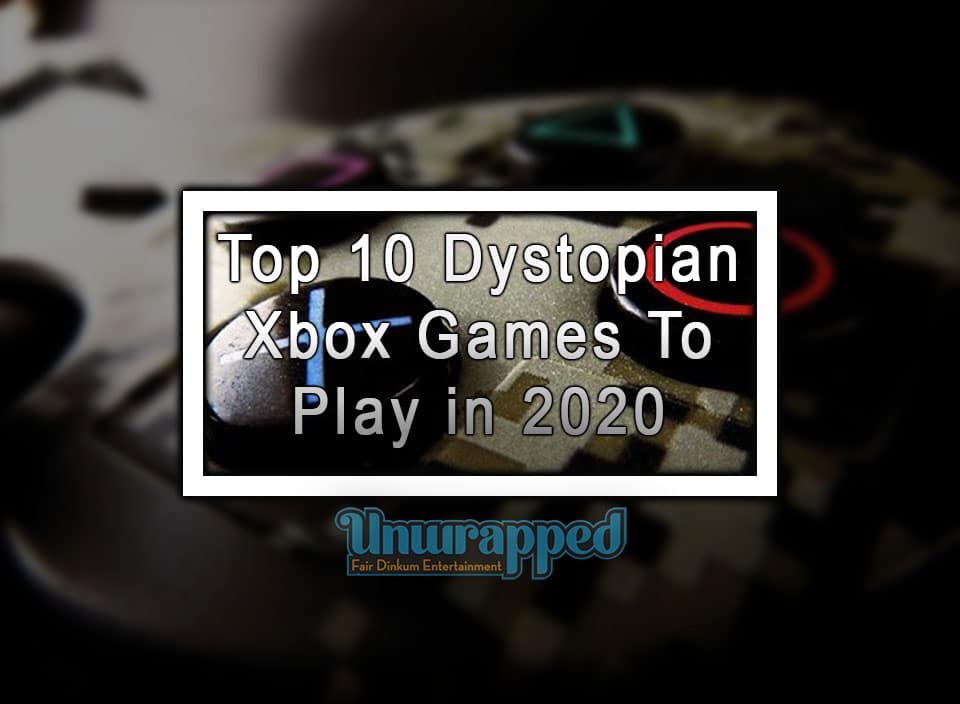 When you look at wars, unrest and bombing in some of the world’s worst countries, you have to agree that those poor people are living their own dystopian nightmare. However, one thing that video games taught us over the years, is that things could always be much, much worse.
The games listed here have worlds that you certainly wouldn’t want to visit never mind live in. At least it’s only a game and you can enjoy the intensity of gameplay taking your mind off the problems you face in the real world by visiting dystopic visions of the future.

The Observer offers players an intriguing cyberpunk world. It features a dystopian future of a gritty city with deserted streets at night with only government advertisements fitting into the game’s theme. A mysterious disease is killing off augmented humans in a technologically advanced world where a mega-corporation has taken over the world after a collapsed government.
The gameplay is appealing to players who are not that into doing much more than taking in the environment and love to explore. The bulk of the game consists of moving from one dystopian setting to another, analysing crime scenes and hacking into the minds of the inhabitants of the city. It offers in-depth environmental storytelling where you have augmented vision where you will learn about now-extinct lives and religions, scan bloodstains, computers and items.
Watch out for a menacing enemy that lurks in dilapidated buildings while you can also hack into people’s thoughts to read their memories. Observer is a thrilling dystopian Xbox game that you should include in your game’s library!

An excellent example of a dystopia with the United States as an alternate history version. Shattered Union follows the story of the most unpopular and hated US president with a combination of civil unrest, horrific economic conditions and foreign terrorist attacks plaguing the country.
Domestic terrorism soon starts with rioting throughout the United States and the hated president, David Jefferson Adams declaring martial law. After a four-year reign of the US, Adams get another term from the United States Supreme Court with a violent reaction from the public.
A tactical nuclear weapon destroys most of Washington DC during the Inaugural Ball for the re-elected president including the president, his entire cabinet and the United States Congress which resulted in a major chaotic country.
After an emergency European Union meeting, it is decided to send peacekeepers to the US to protect European citizens. The US states, however, want nothing from it and with any hopes for a peaceful resolution gone, Civil War broke out. Russia invasion follows and states are claimed, and it is up to you as player to determine whether the US will transform into a fascist state or be reunited, and peace restored.

Crackdown is a third-person shooter Xbox game set in the fictional dystopian Pacific City which is divided into four islands. Three crime organisations control the city and unlike having a police force to keep the peace, an organisation called the Agency keeps crime in check.
The Agency has a special breed of cybernetic and advanced surgical technology to create its super-soldiers called Agents. Players become one of these agents whose task it is to bring down the organized gangs. The Agent roams the city and starts to eliminate the subordinates and gang leaders.
Only once all the “bad” guys are eliminated will the Agent find out that the Agency had control of the gangs and used them to instil fear into the city, then eliminated them to control the city.
Only then will the Agent get instructions to do the same in every city across the world in order for the Agency to create an entirely new world with them in control of the globe as New World Order. Agents have abilities like that of cartoon’s superheroes with continued orbs gained through each kill.

Read More: Can Australia defend itself Without US Support?

Bioshock follows the storyline of Rapture, an underwater city which was the brainchild of a business magnate called Andrew Ryan. His intention was to create a special city for the elite society where they could flourish outside of petty morality and the government’s control. Genetic material was created by sea slugs which Andrew called ADAM which allowed users to change their own DNA.
They could gain super-powers like pyrokinesis and telekinesis. The elite society living underwater was forbidden to ever make contact with the world on the surface. Even though it is supposedly utopia for its residents, class distinctions grew rapidly in Rapture and a former gangster decided to use the lower-class residents to plan a coup.
The gangster, Frank Fontaine created black-market trading with the outside world and with the help of another scientist created another form of ADAM by implanting slugs into orphaned girl’s stomachs. These girls became known as Little Sisters which became Fontaine’s super army which he used to attack Andrew Ryan.
Then another super figure was created called Atlas and Ryan countered with his own superhumans called Big Daddies and Splicers. An all-out war broke out with Rapture falling to become a complete dystopia. The end of Rapture would depend completely on how well a player can navigate through the dystopian chaos.

Deponia is a planet where a large human population once lived. Through time though with different classes, the majority moved upwards to create a floating city which became their utopia and called it Elysium. Centuries later the inhabitants on Elysium forgot their past and origins and thought that the planet below them was uninhabitable.
The humans that were left behind on Deponia consider clean water an incredibly valuable commodity as they literally live among the trash. The people living in the city floating above use the planet below them as a dumping ground.
The game follows the life of Rufus who is living among the trash who builds a makeshift rocket in his attempt to go up to Elysium. When his rocket breaks mid-way, he lands on the militant Organnon, who exist only to terrorize Deponia’s inhabitants and dump the trash.
You will have the time of your life playing this excellent dystopian game following the life and love of Rufus when he meets Goal onboard the Organnon who is shocked when she learns that the planet below has humans living there.

Remember Me plays off in the year 2084 in a city called Neo-Paris which is the futuristic version of Paris. Here a corporation called Memorize is implanting humans with Sensen, which is a brain implant that allows humans to upload their memories onto the net and share it online.
At the same time can they also eliminate unpleasant or unhappy memories. Only one per cent of the population isn’t implanted with Sensen and they call themselves Errorists. The Errorists are rebels who attempt to bring down the surveillance state of Memorize. With Sensen in their brains, some humans developed an addiction to memories and became Leapers.
The number of absorbed memories degraded their Sensen and caused them to mutate into a different form which is subhuman and forced them into the Neo-Paris sewers. The game starts with an Errorist called Nilin, whose memory gets wiped by Memorize but she is rescued by the Errorist leader just before her entire memory is cleared.
The game continues with Nilin eventually changing and mixing up the CEO of Memorize’s brain and players will be completely drawn into the dystopian world of Remember Me and its interesting out-of-this-world characters and storyline.
Players will be able to modify memory details, replaying memories as well as stealing memories from one “bad guy” and transfer it to another. In addition, will you be able to create your own defence moves to destroy or eliminate targets and earn weapons throughout.

Homefront was developed in 2011 as a dystopian futuristic military shooter game for Xbox. It follows a rather ridiculous notion of North Korea that becomes the world’s superpower! Yes, it grows powerful under the leadership of Kim Jong-un who takes his military to invade the mighty United States and succeeds to take over the mightiest country in the world. Homefront plays off in 2025 and it relates to the terrible reality of how it would be to live under a strong military occupation.

When we refer to or talk about fictional dystopia the ultimate cliché is certainly nuclear wastelands. One of the best dystopian fictional worlds come from A4 Games who created their game from a Russian novel’s storyline.
They changed the played-out formula and instead of players wandering through bombed-out wastelands, the Metro 2033 characters are fighting for survival in winding and cramped Moscow tunnels.
Metro 2033 is one of the best games with incredibly well-designed graphics and detailed underground worlds. The tensions are running high while characters get into fights against rivals while navigating the underground world’s tunnels.

Phantom Dust is a 2005 release of a dystopic vision of the future where the land is covered by mysterious dust. The dust contains something that prevents humans to survive above ground and they are living underground. At the same time has it robbed the survivors or their memories. You, as the player has to investigate why it has happened, figure out why nobody can remember and how to recover their memories.

10. Enslaved: Odyssey to the West

One of the most underrated dystopian games that surprisingly hasn’t made it to any other gaming console yet, is Enslaved that has been released in 2010 already. Especially when you consider that many of the inferior Xbox games have been ported to other consoles like PS4. It plays off in a period where humanity has been wiped out after a war decades ago.
The few humans that are left must fight for survival as the earth is under control of mechanical life forms that want to eradicate anything and everyone that lives and breathes. One man and a woman are on a quest to find a solution and you need to be prepared to help them decide what to do next.

These top 10 dystopian Xbox games are only a drop in the bucket of excellent games for you to try. When you are ready to experience the worst of the unimaginable future, try our selection and see if you agree with our choices.

What is a dystopian game?

ystopias are the opposite of utopias: they are grungy, messy, and dangerous. These 10 games present dark glimpses into possible futures for humanity. Dystopias are basically societies that go through a lot of suffering, injustice, and corruption.