Skip to content
You are here:Home / Top 10 Cultural Festivals to Attend in Australia in 2020 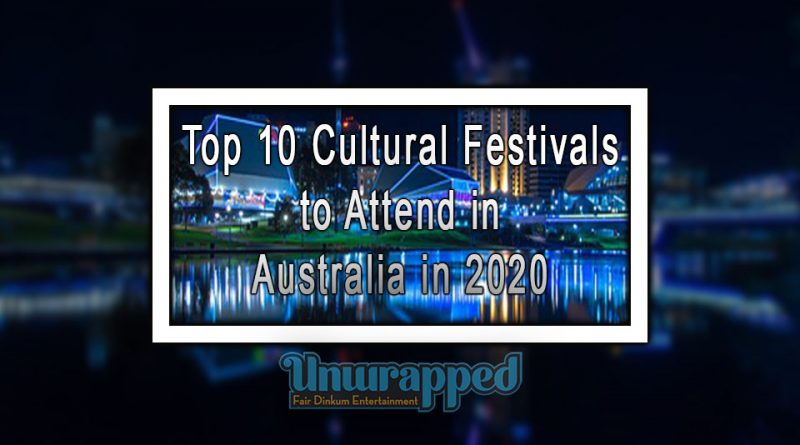 Australians are entertaining people, hence they give you multiple reasons to enjoy and have fun. Among these reasons are hundreds of annual festivals which happen all across Australia. Some of these festivals have been taking place for decades, while a few have started recently. Aussies are party lovers and their festivals depict their nature. These festivals are based on different themes. The only thing common in these festivals is a hell lot of fun. So when you plan your trip to Australia in 2020, make sure to attend any of these festivals and you will remember it for life.

Adelaide Festival was first held in 2017. It is one of the biggest celebrations of arts in Australia. The festival captures the imagination of locals as well as foreigners. Multiple events taking place during the festival include performances based on visual arts, new media, dance forms, contemporary music, opera, classical music, cabaret and literature. In a short time, this festival has emerged as such a giant that small festivals including WOMADelaide and Adelaide’s Writers Week also happen during Adelaide Festival. If you enjoy music and art, this festival is surely for you.

Another festival which happens every year in Australia is the Woodford Fork Festival. The festival takes place near Brisbane. The festival is based on folk lifestyle. You will get an earthy feel in this festival, which is quite different from the themes of other festivals. Woodford invites everyone to experience the wonderful ceremonies which happen inside the forest during the festival.

Vivid Sydney is known to be the World’s largest festival of light, ideas and music. This festival is also one of the largest annual events in Australia. More than 2 million people gather to join the sparkling three weeks of winter during Vivid Sydney. The festival is a feast for the eyes and soul as during the ceremonies, we will be able to see how the most talented light artists from around the world transform harbour and iconic landmarks of Sydney into canvases by illuminating these buildings. The famous Opera House and Harbour Bridge show immensely beautiful dazzling projections. Live music is another famous part of the festival.

If you are in Australia on 26th January, you will find the most awesome celebrations in the country. 26th January is Australia day as it is the anniversary of the arrival of Captain Arthur Phillip, which marks the founding of Australia. Every year, on this day, Aussies gather to celebrate the greatness of their country. The celebrations continue while people meet their family and friends, enjoy barbecues and fantastic fireworks.

The Melbourne International Comedy Festival is one of the three largest comedy festivals in the world. It is celebrated for a period of three and a half weeks during March and April. It is also known to be the largest stand-alone comedy festival in the world. If you are in the streets of Melbourne during March and April, you will see how the city lights up with fun and comedy. You will enjoy the festival so much that your stomach will ache due to excessive laughter. Plan your trip accordingly and enjoy the comedy to the fullest.

Another famous festival taking place in Sydney every year is Harbour Life. The event takes place at the beginning of November. The Harbour Life brings music as well as dance in the town. People travel as long as 20000 kilometres to see the best-located dance floor in the country get all lit with the dances on quality house music. The tickets for this festival sell so quickly that you need to make pre-bookings. If you are unable to grab a ticket, then need not worry because if you have friends with a boat, you can still see the festival from waters.

Another event hosted by Melbourne is the Melbourne International Arts Festival. This festival brings out all forms of arts in existence. These include music, dance, theatre, visual arts and much more. The festival can be considered as the epitome of Australian celebrations. This event is attended by more than 400,000 people. You will enjoy the fabulous arts performances at this event. It is considered to be one of the most high profile art festivals in Australia.

Moomba festival is based on the tradition of Melbourne the festival takes place every year on the banks of the Yarra river over the Labor Day long weekend. The festival features joy rides, fireworks, tastiest street foods and cuisines, carnival setups and above all HAPPINESS. You can enjoy the Moomba festival with your friends and family.

Every April 25 is Anzac Day. this day is known to be the day of remembrance for all Australians. 25th April is the day when Australian and Newzealand’s army took their first major military action during world war 01. The Anzac day is celebrated to remember the ones who have served the nation. The day is highlighted by commemorations which focus on prayers at the dawn, parades as well as church services.

Also See : What To Do in Canberra in August