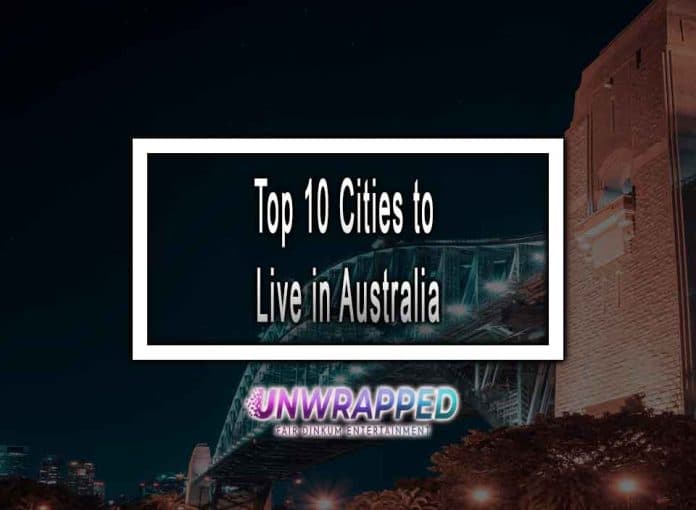 If you are planning to move to Australia, then you might be planning to live in the capital cities of this continent country. But before you finalize anything, you should have an idea about the facts and figures for easy adjustment and comfortability. Yes, we agree, moving to a new country is a major decision. It has its impact on how comfortable you are with the place and your atmosphere. Here is a guide for you to choose from the top 10 cities which are best to live in Australia in 2020. Although the final decision is on you based on the opportunities and lifestyle which is best suited for you, here is the list of best cities to live in Australia.

Sydney is a famous place to live in Australia as well as all over the world. The city has beauties in the form of the mesmerizing sands of Bondi Beach and the iconic Sydney Harbour. The city is not only the largest city in Australia, but is also the oldest one. Sydney is known to the world due to its immense beauty and the diversity of culture and traditions in it. This cosmopolitan city constitutes some of the most famous landmarks in the world besides its hectic major city pace. This city lies in the temperate climate region and experiences hot weather from the month of November to February. Majorly the temperature reaches as warm as mid 30-degree centigrade or sometimes higher during the hottest days. Winters are mild as compared to extreme summers, the temperature drops around 7-degree centigrade during the nights. It undoubtedly is among the best cities to live in Australia, offering you everything from the hectic environment to natural landscapes, beaches and much more.

The capital of Victoria and the second-largest city in Australia, Melbourne is among one of the best cities to live in Australia. Melbourne’s centre is located on the banks of the Yarra River. This city is considered as a cultural as well as the sporting capital of Australia. You can find the best dining and nightlife places in Australia in Melbourne. So if you are a person who loves nightlife and a party environment, then you can easily adjust in Melbourne. This city is the heart of Australia and is named as one of the most livable cities in the world by The Economist. The weather in Melbourne is so interesting that you can enjoy four seasons in a single day. Although the city has distinct seasons around the year, nothing is expected from the weather in Melbourne as it can change in a day. The winter daytime temperatures in Melbourne are lower as compared to Sydney, because it is further in the South.

The third-largest city in Australia is home to many migrants from around the world. People usually consider living in Brisbane because of its attractive weather. As compared to Sydney and Melbourne, Brisbane’s weather is a little warmer. The reason behind is its location in the subtropics. The city experiences consecutive days of sunshine for weeks. Brisbane is considered to be a major urban hub. Besides being active as a city, it also has a relaxed and easy-going environment. The best thing about Brisbane is it’s easily accessible distance from the summer holiday spots including the Gold Coast and the Sunshine Coast.

Hobart, the capital city of Tasmania, is also among the best cities to live in Australia. This city is surrounded by beautiful countrysides and natural landscapes. It offers a relaxed atmosphere in terms of lifestyle. As compared to the busy cities like Sydney and Melbourne, Hobart moves at a slow pace. If you are a food lover, then Hobart should be your consideration for living. It also is a culturally rich city. It is the southernmost capital city in Australia hence experiences the coldest temperatures out of all the capital cities. During the winter the temperature goes down to as low as 4 degrees centigrade in the day time. Summers are slightly warmer and experience a temperature up to 20 degree Celsius during the day.

Read More : The Top Spots To Propose In Australia

Adelaide is famous for its location in the Mediterranean climate zone. The city has a population of more than 1.3 million people. Adelaide is hosting a large number of immigrants and is easily becoming a popular place for living in Australia. Adelaide is the capital of South Australia. The city basically offers a combination of a relaxed lifestyle, beautiful weather conditions, and affordability. Affording a house in Adelaide is much easier as compared to Sydney and Melbourne. The weather in Adelaide is pleasant around the year. During the summer, the day time temperature rises up to 20-degree Celsius and during winter the night time temperature drops as low as 7-degree celsius.

People usually think that Sydney is the capital of Australia, because it is the largest city. If you also think like this, then let me tell you, you are wrong. The capital city of Australia is Canberra and interestingly it is the smallest city in the country too. Canberra has a population of just over 373,000 people. Canberra lies in Australian Capital Territory which is the federal district. It is home to Australia’s parliament and workers and visitors. If you plan to migrate to Australia, Canberra can be a good option to consider for its low population. The city offers a dry and extreme climate. During the winter, the temperature drops down to the freezing point and during summers the average temperature rises up to 20 degree Celsius during the day.

Darwin city is known for its relaxed and laid back environment. It is located in the tropical zone, due to which the moderately warm climate around the year makes it a good place to live. Darwin has much more to offer you besides affordability. The city is surrounded by incredible natural scenery and serene environments. It also has a buzzing nightlife for party lovers. Being in the tropical region, it has a pattern of wet and dry seasons. From April to October, it usually is dry and more pleasant with clear blue skies during the day and starry skies at night. The wet season starts from November and stays till March. During this season, the city experiences many storms and the average temperature stays around 30-degree celsius.

Read More : 10 Things That You Should Do When Writing Your Will

Perth another capital city in Australia, is also among the list of most livable cities in Australia. The city features a very relaxed beach lifestyle. It offers a wonderful climate for living. If you are considering somewhere to live, Perth is worth a consideration. The city has a population of 1.25 million and is known to be the most isolated capital city in the world, but it offers beautiful and charming weather for living. Naturally, this city lies in hot temperature zone due to which it is a warm city. During summer, the temperature rises up to 30-degree Celsius while in winter, the temperature drops down to just 18 degrees centigrade.

Besides all the worth living capital cities in Australia, Wollongong also known as the Gong, is another place which can be your new home. It is located in the Illawarra region in New South Wales, at coastal strip towards the south of Central Sydney. It is a seaside city, hence offers the beach lifestyle. It is the third-largest city in New South Wales and the tenth-largest city in Australia with an urban population of more than 0.3 million. This city is famous for its heavy industry and port activity. Working-class usually prefers to live in this city. The narrow coastal line offers stunning surf beaches and rainforests. Besides immigrants, this city is known to attract many tourists every year. The University of Wollongong with more than 37,000 students is also an internationally recognised university.