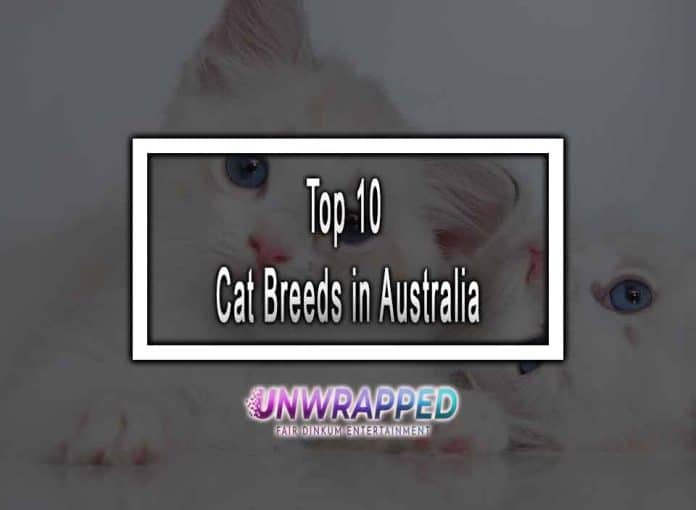 Have you ever wondered where cats come from or which country or do you simply love your tubby? Numerous research that has been conducted through centuries found that it is likely that Australian cats are likely brought in or descendants from European settlers. While the surrounding Australian Islands have many feral cats, which are probably originating from Europe, there are domestic cats born and bred in Australia.
The downside of feral cats is that they have a damaging and negative effect on the environment which impact native species. The spreading of disease and competition for food play a big role. The domestic cat and the European Red Fox, for example, are predators and in Australia, more than 100 native species are under threat by feral cats.

Australia Will Kill A Third Of Free-Roaming Cats By 2023

News that the Australian government will be killing around six million cats by 2023 sparked tremendous interest. Nothing to worry about though when you want to get yourself or your family a cat. The once domestic cats that were abandoned are now feral cats which the government will kill off to avoid the endangering of native species. The cats will be killed off by feeding them with poisonous sausage which will be infused with 1080, which is a deadly poison.
The difference between a feral cat and simply a stray cat, is that a feral cat does not know or understand human interaction. It is highly unlikely that a feral cat can be caught, attracted or tamed. The only way to keep other threatened species safe from extinction is by ridding Australia from the dangers.
It might be on a sombre note that we look at the top ten cat breeds in Australia, but keep in mind that these are domestic cats and not a dangerous feral cat.
Are you looking at getting your family a cat and not sure which one to choose? Check out our top cat breeds in Australia in 2020 and decide according to your needs and circumstances.

The Australian Mist is a medium-sized cat with short hair and very compatible with other types of animals including dogs. It is an entirely Aussie breed with a large gene pool. More than 30 cats are the result with a quarter of Australian Moggy and Abyssinian and the other half coming from the Burmese cat. Nothing about this breed is extreme as it has a plump furred tail, short resilient hair, with colours of gold and peach, lilac, chocolate, blue and warm brown. Their eyes are expressive, large and a varied range of green. They live well into their teens and weigh between four and seven kgs.

The Bengal is a medium sized cat with a short-haired coat with low compatibility with other animals. The Bengal is a hybrid of Asian Leopard cat and a domestic cat. It has a muscular body, with longer hind than front legs. It has a longer head, smalls ears and black-rimmed almond-shaped eyes. You get two types spotted and marbled type coats. The colours can be brown, seal sepia or mink coloured. They weigh between four and eight kgs and live until their early teens.

The Abyssinian is from Ethiopia and came to Britain in 1868 before introduced to Australia. They are distinct with a coat laying close to the skin. They have expressive eyes either hazel, green or amber in colour with dark rims around them. They have large ears, a wedge-shaped head and a slender body. They are incredibly loving and loyal and love their owners and demand loads of attention. They get along with any animal and will even love your dog.

The Burmese is one of Australia’s most loved cats and wonderful companions that get along exceptionally well with other pets too including dogs. They love cuddling and referred to as lap-warmers. They have a glossy, light-coloured coat, with wide-set golden or yellow eyes. They are medium-sized and one of the cats breeds with the longest lifespan reaching up to twenty years old. They are intelligent and spirited and you can even teach it to fetch balls and toys. They do not like to remain left alone for long periods.

Read More: How to train a kitten to use the litter box?

It is rumoured that Siamese cats are from Thailand and that the guarded Buddhist temples. They are still sacred to this nation and it was an honour to receive a Siamese cat. They are distinctive cats with fine, short coats that shed very little. Their coats are always pale with their ears, face, tail and paws a darker colour. An outstanding feature is the striking blue eyes. They prefer to have as much contact with their owners as possible and are intelligent, energetic animals.

Even though Persian cats are from Iran and Turkey it is a much-loved cat breed in Australia. They love sitting somewhere ready to be admired. They are sweet and calm cats and not very active, with the only downside being cats that shed terribly.

Read More: How to stop your cat from peeing everywhere?

The most popular cat in Australia in 2020 and beyond is the tabby or moggie. It is a domestic shorthaired cat that is found in most Australian households. They have countless patterns and colours and their personalities are equally diverse.

The gentle giant, the Maine Coon is impressive and magnificent with a thick fur coat and a large stature. They might appear intimidating, but they are lovable sweet-natured cats.

Fortunately for Australians can they have a Norwegian Forest Cat in their midst and is it a popular cat breed in Australia. They originated more than 500 years ago in Norway and exported globally. They are affectionate, lively and energetic and especially fond of children and other animals.

Read More: How to turn your cat into lap cat?

It is argued that the Russian Blue originates from the Arctic Circle and travelled to England by ship. The Australian Russian Blue is bred to the same standard as other countries, but the deep blue colour of the coat stands out from the body. It has a silvery sheen and it is an appealing pet to have.

Read More: 10 Most Remote Places in Australia that you Never Heard of

Cats are much like dogs in the sense that they are fond of their own families while they do not take well to strangers. This Top 10 Cat Breeds in Australia in 2023 list should help you to decide which cat breed to choose, and keep in mind that much like children, do they love ongoing love and attention. When you get a cat though, avoid letting them get lost and turn into feral cats or a terrible fate would befall your pet in due time.

What is The Best Music To Listen To While on Ecstasy...

6 Ancient Greece Facts That will Amaze You