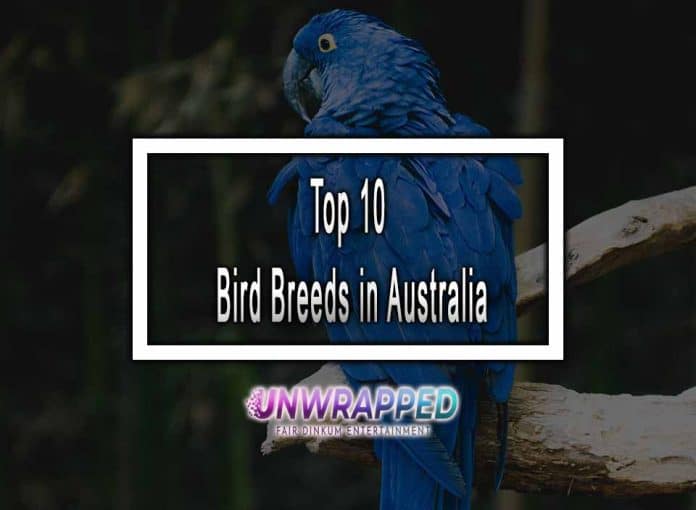 If you are a bird lover and looking for a paradise to watch some of the world’s most extraordinary birds, you will find no better place than Australia. Birdwatchers fly from around the globe to tick off birds from their bucket list. When you consider that Down Under has more than 850 bird species, it is quite impossible to start naming the top 10 bird breeds in Australia in 2023 when they contend to be some of the world’s most beautiful birds. 45% of our birds are found nowhere else, therefore is it a true bird lover’s paradise.
Travel to Australia in 2023 for birdwatching to check out these top bird breeds

The Southern Cassowary is at the top of our list as it is one of the most extraordinary birds that you might never get to see if the threats against their survival persist. It is currently under the endangered species list with the main threats against it, dog attacks, vehicle strikes and habitat loss.
They are found in Queensland and the largest native animal. The Southern Cassowary is a flightless bird with the Australian rainforests their primary habitat. They are a keystone species in the tropical Queensland’s World Heritage list.
The adult Cassowary has a tall helmet called a casque on their heads that protects its head when running through the jungle but also help them to sense low vibrating sounds. This bird is solitary and very territorial and will not attack a human unless it feels threatened. They eat over 200 species of plant’s fleshy fruits.

What makes them even more unique is that they disperse seeds over long distances. The Australian government has implemented a bold action approach in their 20 threatened birds by 2023 trajectory to protect and preserve this bird among 19 other endangered bird species.

When you spot a Tawny Frogmouth, you might think it is an owl as it strongly resembles an owl, however, this beauty is closely related to Nightjars and Oilbirds. You will find it throughout Tasmania and mainland Australia.
It weighs up to 680 grams and measures between 35 and 53 centimetres. They are bulky with binocular large yellow eyes. They are formidable nocturnal hunters with outstanding eyesight and hearing. They are not great fliers though and even though they are swift, they only fly short distances.
This bird lives in scrubland, forests, acacia woodlands and has a love for golf courses, suburban parks and eucalyptus woodlands. You will not find it in treeless deserts or dense forests.
Their diet consists exclusively of insects like cockroaches, snails, slugs, worms, centipedes and spiders. It is not uncommon though for them to feed on small prey like small birds, mice and frogs. This native Australian bird is at risk of pesticides exposure since they love to live in close proximity to humans.

If you have a top 10 bird breeds in Australia in 2023 list without a Gouldian Finch on it, you didn’t do your homework! This is certainly the most strikingly coloured bird in the world. It is native to Australia’s grasslands, but a large number of this bird are bred in captivity.
It is estimated that due to the increasing number of captive Gouldian Finches, there are only about 2500 found in the wild. This bird loves interacting with its own species but is intolerant to larger bird species and human handling.
Both females and males are strikingly beautiful with variations of green, black, red, yellow, purple and blue. As with most bird species the males are more vivid in colouring. Gouldian finches prefer a seed-based diet that can be supplemented with vegetables and fruit.

The Splendid Fairy-wren is excellently and aptly named as it is indeed a splendid-looking bird species. The male is a brilliant violet-blue that can range for violet-blue in the western region of Australia and cobalt-blue in the eastern part of Australia.
At the base of the tail, across the breast and through the eyes, it has a black band, except for the violet-blue birds. The Splendid Fairy-wren, unfortunately, when not in breeding can be a drab brown especially the females, but at least the male will keep its dull-blue tail feathers when not in breeding.
The Splendid Fairy-wren is across two Australian areas. You will find it from Shark Bay through Western Australia and Southern Australia, through NSW to Moree and south Queensland. They prefer semi-arid areas and dense woodlands of acacia, shrublands and Mallee eucalypt areas. Its diet consists of forage in shrubs and on the ground and predominantly insect eaters.

The Eclectus gives you two extraordinary beautiful birds in one as the male and the female are entirely different in appearance. Both are large and are up to 450mm in length. You will pot them predominantly on eucalyptus woodlands and rainforests.
The male Eclectus Parrot is emerald green with the sides of the belly and underwing coverts a rich scarlet with the wing bends a deep blue colour. Its eyes are orange with the bill’s upper mandible a coral pink and black lower mandible. Its short square tail is green with blue-tipped feathers.
The female has a vivid red colour with the mantle featuring a blue collar, the belly also has a violet-blue band, as well as the underwing and bend of the wings, are bright blue. She has an orange-tipped tail, orange eyes and a coral pink upper mandible.
The physical differences between the male and female are incredibly unusual and decades ago ornithologists thought it was two different species. This breed has incredible intelligence and an ideal pet as it learns to communicate cognitively very quickly.

A native Australian raptor is the Nankeen Kestrel and one of the area’s smallest falcons. It is widespread throughout Australia but also sporadically found in Tasmania. They avoid dense forests and are spotted in farmland and grasslands. The Nankeen Kestrel hunts a variety of prey like insects, lizards, small birds and mice.
It is a slender and rather small bird of prey and the top part of its body predominantly rufous and streaked with black. The females are heavily marked with added rufous on the tail and the crown and larger than the male. Unlike other falcons, the Australian Kestrel is slower and does not rely on speed to catch prey.
A pair is monogamous, and their nests are always a convenient cliff ledge, a tree hollow and hardly ever modified by the birds. In late winter they the female lays her eggs with hatching taking place after 28 days.

In the Birds of Paradise species, there are more than three dozen species. They are found in New Guinea and Australia and this species are so magnificently attractive that skin hunters target them.
They are mostly distinguished by the absolutely striking colours with plumage in bright green, scarlet, blue and yellow. Its colours set them apart from the most attractive and dramatic birds in the world. Some of them have enormous head plumes whereas others have distinctive ornaments like head fans or breast shields. The males also have amazingly elongated feathers and vibrant feathered ruffs.
These birds can weigh up to 15.2 ounces, with a wingspan of up to 47-inches and size of 43-inches. They live between five to eight years. Their diet is predominantly omnivorous, and they eat berries, seeds, fruit and insects.
These magnificent birds are aside from their extraordinary appearance also known for the elaborate mating dance that the males perform. It is the most spectacular bird dance on earth.

No list can be complete without the Australian national bird, the Emu. They are the world’s second-largest bird and can grow up to 1.9 metres in height and weighs up to 35 kgs. Unlike other birds is it the male Emu that incubates the eggs.
Even though the emu is a flightless bird, they have great speed and easily reach a 50 km/h mark. It is interesting to note for those who didn’t know that the bird that appears on the 50-cent coin of Australia alongside the red kangaroo, is the humble emu.
You will find emus all over Australia both along the coast and inland but in the southeast corner of Australia, they are most common. Their diet consists predominantly of seeds, berries, fruit, flowers and grasses as well as insects like moth larvae, ants, caterpillars, ladybirds and grasshoppers.
They are a rather vocal bird which is a booming noise that can be heard up to two kilometres away. They are nomadic too and either travel in flocks or in pairs. When the need arises they will be able to swim.

A Scrub bird is a solidly built small bird with powerful legs, strong pointed bill, short round wings and graduated tail. These birds are brown with a cross extending from their tail tip to the heads. The underparts of the bird are buff coloured.
They do not have very powerful flying abilities and will only be able to fly a few metres but with their wings, they do small runs from one shrub to another. At the same time are they avid climbers and move fast from sedges and shrubs to overhanging canopies.
They are found in south-eastern Queensland and New South Wales.

The Lyrebird is one of the best-known Australian birds and capable of mimicking almost any sound. There are two types though, the Albert’s lyrebird in NSW which is darker and smaller than the superb lyrebird. The superb lyrebird lives in areas with rainforests. The name of the bird comes from an ancient Greece musical instrument called a lyre and when the bird spread its tail it looks like a lyre.
The male bird grows up to 100 centimetres in length which includes its tail of 55 centimetres. Its upper body is dark brown and the lower part light brown and around its throat it is red. The tail feathers are silver-great below and dark brown above. The females are smaller but similar in colouring to the males.
This bird species are ground feeders that eat small invertebrates like frogs, spiders and other insects. With their powerful legs, long claws and toes, they rake the soil and dead leaves to find their food.

While this is our take on the Top 10 Bird Breeds in Australia in 2020 to be on the lookout for, you might think otherwise. You are welcome to add your own favourites in our comments as the Australian bird species are indeed some of the world’s most iconic.

Also See : Australia Must Invest In Education for the Poorest in Our Society