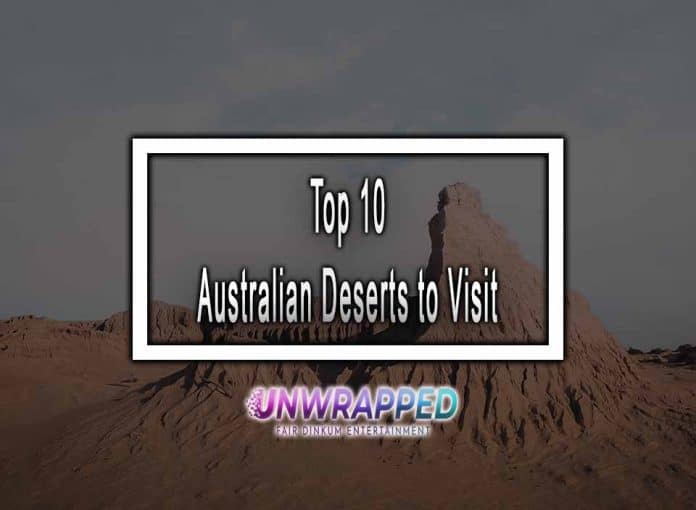 10 Largest Deserts in Australia To Add in Your Bucket List

Australia is the world’s most dry inhabited continent. Around seventy per cent of the mainland in Australia receives less than around 500mm of rain each year due to which it has created a suitable condition for the formation of deserts. The Abundance of deserts in Australia can be explained by multiple climatic factors such as its arid climate, less rainfall, and bright sun.

Here, we have listed the 10 largest deserts in Australia to add in your bucket list while you are in Australia. These desserts will make you familiar with the climatic, territorial, and living conditions in deserts. So, get prepared for a memorable ever-lasting pleasant experience through the vast Australian deserts.

The area receives a below-average rainfall of only 200 t0 250 mm annually. In summer the temperature varies from 32 to 40′ C while in winter it ranges between 18 to 23′ C. The climate, temperature, and terrain of this desert are not suitable for human settlement and therefore, it is uninhabited.

In North West of Western Australia, we have the country’s second-largest desert named as the Great Sandy Desert. The desert occupies an area of 284,993 square kilometres. The great Victoria Desert itself is surrounded by the Tanami Desert and the Gibson Desert.

The region is inhabited by two aboriginal groups namely Pintupi and Martu. The desert is also home to a few mining centres located in its region. The most prominent vegetation in this area is spinifex while the animals that inhabit the region are feral camels, red kangaroos, dingoes, goannas, and parrots.

The Tanami Desert is situated in Western Australia and proximity to the Green Sandy Desert. The desert features rocky terrain having small hills and has a Tanami track to cross the area. The Tanami Desert has a unique significance since it is the home to a few of the rarest and endangered species of the country.

The Simpson Desert is not only the fourth largest desert in Australia but also is the largest dune desert in the world. It extends over an area of 176,500 square kilometres while occupying parts of South Australia, Northern Territory, and Queensland.

The Simpson Desert is also the home to the world’s longest parallel dunes. The Nappanerica dune, stretching over 40 meters in height, is the largest here. Surprisingly, the world’s largest inland drainage basins system is also a part of this desert.

The Gibson Desert, in close vicinity to the Green Sandy Desert, extends over to a vast area in Western Australia. The name Gibson comes from the explorer Alfred Gibson who in 1874 got lost in this desert and was never seen since. The desert has an area of around 155,000 square kilometres making it the fifth-largest desert of the country.

The altitude of the Gibson Desert is about 1600 feet in some locations. The terrain of this desert is covered in a gravel-covered by grasses, upland areas, dune fields, rocky ridges, and red sandplain areas.

Read More: Top 10 Unique Places to Visit in Australia in 2020

Read More : How to fix The Aboriginal Australian Poverty and Health Gap

The Strzelecki Desert is extended over to few regions of South West Queensland, Far North Region of Australia and Western New South Wales. The name comes from the name of a Polish explorer Pawel Edmund Strzelecki.

The Diamantina River, cooper creek, and the Strzelecki Creek all flow pass through this desert. Furthermore, the desert features vast dune fields and three wilderness areas.

The Sturt Stony Desert is situated in the North-Eastern part of South Australia. It also stretches over to the far south-western area of Queensland and New South Wales’s far west. The Desert’s name comes from the explorer Charles Sturt who in 1844 named it himself while searching for an inland sea in the country.

The desert is mostly dominated by gibber and consists of few ephemeral lakes namely gilgai. The Sturt Stony Desert is the home to the endangered species of the Kowari mouse which has been classified as vulnerable.

The Tirai Desert, located in South Australia, occupies an area of 15,250 squares kilometres. A part of the Tirari Desert also blends with the Kati Thanda-Lake Eyre National Park. Several dunes and salt lakes run across the desert from north to south and are a significant part of the desert.

The Cooper Creek passes through the Desert which is subjected to scarce rainfall and extremely high temperature adding to its harsh weather conditions. The Tiwari Desert is considered as an area with paleontological importance while providing a ground to several fossils discoveries.

The Padirka Desert is located at a distance of 100-kilometres from Oodnadatta’s northwest region in South Australia. The desert encompasses an area of only 1,250 square kilometres. It features deep red sand and thick mulga woodlands dominate this region.

The Pedrika Desert’s dunes are widely spaced and eroded. The region is currently being prepared for pastoral work.

Why Is Nusa Penida Famous? Is It Worth Visiting?

Why Is Nusa Penida Famous? Is It Worth Visiting?

How To Find The Perfect Junk Removalist Near You

Top 10 Reasons to Visit the Birthplace of Australia, Sydney in...

Is Sports Betting Legal in Australia and Where Can I Bet?