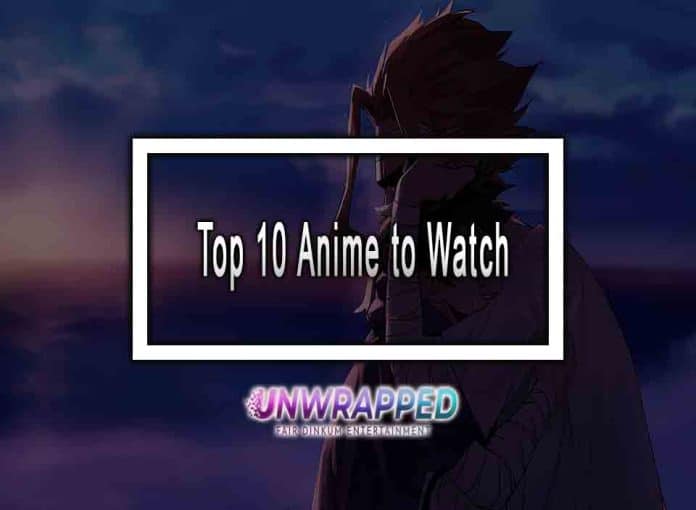 10 Best  Anime You Need to Watch

This summer, the most significant thing to do is watching anime, which is sacred for an otaku or just a bored person. We have compiled a list of anime to watch this summer, significantly since anime might become a trend this year. Below, we’ve rounded up the best anime to watch in Summer 2022.

Spy Family is a new anime series that will premiere in April 2022, derived from the popular manga serialized on Shonen Jump+ since 2019. Wit Studio and CloverWorks created the widespread spy-themed comedic anime adaption. Spy Family centres on a fictitious family comprised of an experienced spy Loid Forger, a skilled assassin Yor Forger, and a psychic girl Anya Forger. Spy x Family is a shonen manga written and illustrated by Tatsuya Endo that was previously published on the Shonen Jump+ app but is now available in tankobon volumes.

The plot revolves around a spy who needs to create a family to fulfil his duty. But he fails to realize that his adopted daughter and pretend wife are both mind readers and assassins.

It tells the narrative of Denji, an impoverished young man who, after making a deal with a dog-like devil named Pochita, merges with him, allowing him the ability to transform sections of his body into chainsaws.

Attack on Titan, a titular series, is nearing its end with the release of the Final Season Part 2. The first half of the last season got aired between December 20, 2021, and March 20, 2021. And the second half started in January 2022. The writers finished the original manga story a little earlier, but many mysteries surrounding the Titans and primary characters remain for fans of the anime adaptation.

Attack on Titan revolves around a post-apocalyptic future in which cities build gigantic barriers to keep out the titans, giant, deadly humanoids that wander the Earth, and evolves throughout numerous key twists that turn the basic concept on its head.

Despite being tarnished by controversy due to the show’s imperialist messaging and potentially fascist undertones, the series drew a vast American audience.

For better or worse, the patient accumulation of fan theories and plot developments was the type of spectacle that Game of Thrones viewers could remember with pleasure and horror, demonstrating the influence that good characters had on their committed fanbases.

It is a triumph of vision and skill, proudly asserting itself as one of the best anime to come out this year and additional evidence of Iso’s illustrious yet quiet brilliance.

The novel takes place in the year 2045 in outer space, where artificial intelligence, the internet, and social networking sites are commonplace. A tragic accident occurred on a recently launched Japanese commercial space station, leaving a group of children behind. With a slight possibility of rescue from adults, their only lifeline is a barely surviving narrowband, a social network, a free application of low-intelligence AI, and a drone piloted by a mobile gadget based on augmented reality called Smart.

Tsuda Naokatsu, the creative director of JoJo’s Bizarre Adventure, has created a new anime called Tokyo 24th Ward, which follows a Minority Report-style plot about people who predict crimes before they happen.

The three protagonists, who live in the titular 24th Ward of Tokyo Bay, are typical anime attractive lads that fans will undoubtedly like (something that Naokatsu indeed carried over from his experience working on JoJo’s androgynously handsome main characters). That everything works in this thrilling new story.

Enter Tokyo Bay’s 24th Ward, an artificial island within Tokyo Bay. Shuta, Ran, and Koki, three of its residents, have been best friends since childhood, but everything changed after a fatal occurrence. After reuniting for the first time in a year, they receive an unexplained phone call.

Sh Harusono’s manga series Sasaki and Miyano has been serialized online since 2016 on the pixie Comic website. Media Factory has published it in eight volumes from 2018 to 2020. Media Factory issued a two-volume novel adaptation by Kotoko Hachij.

Miyano spends his days reading Boys’ Love comics and thinking about how girly his face is until a chance encounter leads to a fight with his senior Sasaki. In love with his feisty junior Miyano, delinquent Sasaki seizes any opportunity to get closer to her.

World’s End Harem is a 2022 anime based on a famous manga story. The original manga has been a series since 2016, and the first anime adaptation was supposed to air in October 2021. However, it got pushed back to January 2022. The sexual dark fantasy shows a futuristic society infested by a unique virus that kills 99.9% of the world’s male population.

When Reito recovers from a deep freeze, he finds himself in a sex-crazed new world where he is the planet’s most valuable resource. Reito and four other male studs received prosperous lives and a single mission: to repopulate the globe by impregnating as many women as possible.

My Dress-Up Darling is a brand new anime series from 2022 that is gaining popularity this winter. CloverWorks’ romantic comedy animation came from a manga story that has gotten serialized on Young Gangan since 2018. My Dress-Up Darling depicts the friendship of a high-school newbie who enjoys making traditional Japanese Hina dolls and his classmate and heroine who enjoys cosplay.

In this charming and spicy romcom, a solitary boy and a showy girl find common ground through cosplay! Wakana Gojou, a doll-artisan hopeful, spends his days as a loner, finding refuge in his high school’s home ec class after being traumatized by a childhood incident with a buddy who objected to his love of traditional dolls.

Rust-Eater Bisco, a much-anticipated new anime, will premiere in January 2022. It is a fantasy and adventure adaptation of the famous same-titled light novel published in 2018. Moreover, the scenario is a post-apocalyptic world influenced by the Rusty Wind, which rusts Japan. Bisco Akaboshi, a little child, embarks on a voyage searching for a miracle fungus known as Rust-Eater.

Sabikui Bisco is a Japanese mix-media property that consists of a light novel, manga, and anime. It is about a young man named Bisco Akaboshi who sets out on a mission to collect the Rust Eater mushroom, a wonder medication that removes all rust to rescue his ailing master.

Following the popularity of Demon Slayer: Mugen Train, a 2020 anime film that broke Japanese box office records despite the Covid-19 outbreak, the adolescent hero Tanjiro returned in early 2022 for the second season of epic combat and mayhem. The anime has received accolades for its stunning animation and is presently in the Entertainment District Arc. Tanjiro and his pals are on the hunt for a terrifying demon masquerading as a high-ranking courtesan.

The second season adapts the manga’s fan-favourite Entertainment District Arc, which leads Tanjiro to Japan’s red-light district in search of a monster that has been wreaking havoc in the area.

Demon Slayer just finished Season 2, which included seven episodes based on the Mugen Train Arc and eleven episodes based on the Entertainment District Arc. Because the first half of the season came from the Demon Slayer: Mugen Train film, the excitement did not truly build until Episode 8, when Tanjiro Kamado and his comrades went into Tokyo’s red-light district to pursue a demon. Or, as we later discovered, a pair of monsters. The ensuing battle featured beautifully choreographed fight scenes, fantastic animation, and emotional turning points. So, in conclusion, No Matter How Many Lives, let’s look at how Demon Slayer ties up a great second season while setting up future plots.

Now that you know the top ten anime to watch during the summer of 2022, here are the tips to enhance your viewing adventure:

Must See: Most Popular Anime Characters of All Time

Top 5 Anime Shows That Will Make You Cry

Who are the Badass Anime Male Characters in 2022?

10 Most Popular Anime Characters of All Time