The Rise Of Bitcoin: Predictions From Experts 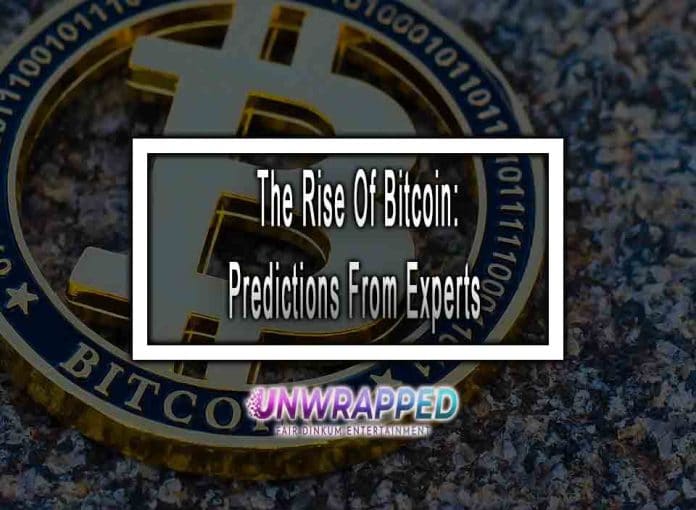 The question that everyone seems to be asking at the moment is, will the popular Cryptocurrency, Bitcoin, rise, fall, or end up teasing investors on an unpredictable road in 2022?

As a new investor looking for an immediate edge in the Cryptocurrency market, it might seem that Bitcoins are your best bet.

Should you put your faith and money in Bitcoins in 2022? We most definitely don’t know, but we know what experts are saying!

So without wasting any further time, let’s check out the top predictions about the same, relevant in 2022!

The Rise Of Bitcoins: What Are Experts Saying?

Are you new in the investor’s market and want to become a bitcoin trader? Or, are you wondering whether Bitcoins will prove to be a safe bet this year?

Scroll down and find out all that you need to know about the same.

Experts are already saying that the price of Cryptocurrency is going to fall further this year. Although the prices had risen to nearly 69,000 dollars in the month of November last year, they have fallen to 50,000 dollars recently.

So it is evident that prices have fallen by a whopping 30%, and things are about to heat up further! In fact, a professor from Sussex University, Carol Alexander, predicted that Bitcoin prices would hit an all-time low at 10,000 dollars which in turn will get rid of its gain over the last two years.

Then, a Crypto analyst from Bitbank (Digital Asset Exchange platform based in Japan), Yuya Hasegawa, predicted that the Fed’s quantitative tapering would become the most relevant risk factor in 2022.

Sayantani Sanyal even pointed out in the Analytics Insight how the Bitcoin price will reach 100,000 dollars by next year.

2. Inclusivity For Bitcoins: More Investors Will Accept And Adopt Bitcoins

When Bitcoins were introduced for the first time, not all investors were ready for them same. But it’s been sometime now, and the Crypto market is no longer associated with just Bitcoins – there are more varieties of Cryptocurrency in the market today, making adaptability and inclusivity no longer an issue.

In fact, we are not saying this alone – we have evidence. In fact, the founder of the Digital Assets Council of Financial Professionals, Ric Edelman, even went on to predict that nearly 500 million individuals or more will own Bitcoins by the time 2022 comes to an end. And Ric Edelman is not the only one saying this.

The co-founder of BlockFi and CoinTelegraph, Flori Marquez, agrees with Ric on this one. The reasons behind the same?

According to Flori Marquez, a better understanding of how the industry functions and regulatory clarity can boost adaptability!

3. Walking Towards DeFi: The Future Could Be One That Believes In Decentralized Finance

The network steward of ICHI (a Cryptocurrency platform), Bryan Gross, predicts that both DAOs (decentralized autonomous organizations) and Defi (decentralized finance) are areas that will witness the highest amount of growth in the Crypto market in 2022.

The best part about decentralized finance is how it aims toward re-creating conventional financial products but without middlemen. If you think Bitcoins are too big a bet for you, as a new investor in the Crypto market, you can always watch out for small Crypto coins like Solana, Polkadot, Ethereum, and Cardano, in 2022.

CNBC even reported how the concept of DeFi is a part of something bigger known as the Web3 trend. The Web3 trend claims how the internet is under big companies like Amazon, Apple, and Meta. As a result, Web3 has appealed for a decentralized and newer iteration for the internet at large based on incorporating non-fungible tokens and Blockchain.

But entrepreneurs like Jack Dorsey and Elon Musk continue to stay skeptical.

4. To Perform Or Not To Perform: That Is The Question, Said Bitcoins

The global pandemic might have affected all industries out there but Bitcoins somehow managed to show quite an impressive rise in the year 2021. While Bitcoins vaulted by 66 percent, the S&P 500 rose by a solid 27 percent.

In fact, Arcane Research even points out how the Bitcoins have performed just like some risk-on assets, predicting how they will later amplify the stock market’s behavior. By that logic, Bitcoins will perform if the market has a good year and vice versa.

Predictions Are Not The Reality: Bitcoins To Rise…Or Maybe Not?

As an investor, you would know the relevance of predictions, but at the same time, it is only normal that you can’t decide everything based on predictions. Keeping up is vital, but completely guiding your investment career by that logic is not binding law.

You can always choose to experiment and take your time to gain an immediate edge on the stock market. Don’t forget to let us know your thoughts on the same in the comments below.

FUNGIBLE OR NON-FUNGIBLE: WHICH IS THE BEST CHOICE?

Get an Overview of Bitcoin and Ethereum Right Here