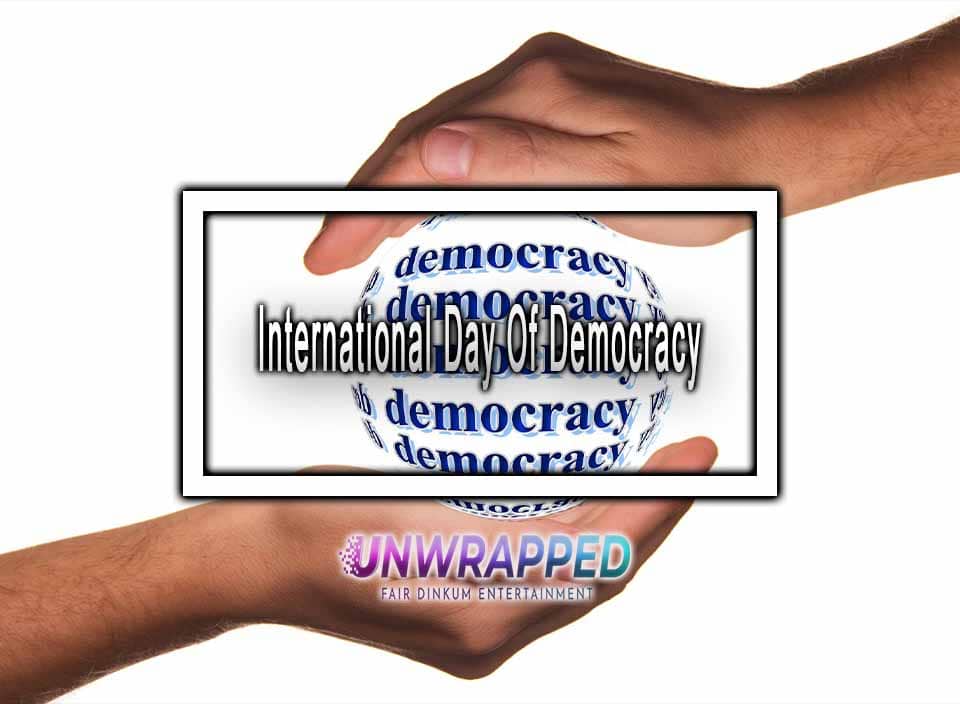 International Day Of Democracy is celebrated every year on September 15. The United Nations declared September 15 of each year as International Day of Democracy. All UN member governments and organizations were asked to commemorate the Day. We are given a chance to honor and appreciate our democratic society to mark the Day.

A free community makes it easier for people to take their liberties for granted. If you don’t have freedom, you face enormous hardships that might be difficult to comprehend. Let’s take a look at the history of Democracy and give thanks to those who helped shape our system of government, and let’s search for ways to strengthen and safeguard our Democracy here at home.On Democracy Day 2019, the theme was “participation”. “This year’s International Day of Democracy is an occasion to remind ourselves that democracy is about people. Democracy is about inclusion, equal treatment, and participation – and that it is a fundamental building block of peace.”

Democracy is a form of government in which citizens exercise power by voting. Democracy is built on a foundation of inclusion. Equal treatment and participation are also important components. Democracy is also a building block for peace and human rights. Countries with democracies have a constitution, which helps to create an environment of protection for its citizens. Democratic states also are less likely to breed terrorists. They are also more active in the global economy.

Do you know? The United Nations voted in 2007 to designate September 15 as the International Day of Democracy, which would be honored every year. This Day aims to highlight the importance of the government’s role in promoting open Democracy and celebrate the system of values democracy fosters, allowing individuals to make decisions about all areas of their lives. Monitoring elections, strengthening democratic institutions and accountability, and aiding states recovering from conflict in creating their constitution are just some of how the United Nations (UN) advocates for democratic societies across the world.

People’s capacity to participate in the nation’s decision-making has been a cornerstone of Democracy since its inception in ancient Greece thousands of years ago. You can only achieve an inclusive, egalitarian society if all citizens have equal access to the ballot box regardless of ethnicity, gender, or other personal characteristics. Because we live in a representative democracy in the United States, elected officials act as a spokesman for the people. So remember that when reflecting on your liberties, think about how many ways you engage in our country’s democratic process and support the principles of Democracy.September 15th is the International Day of Democracy. The UN declares this day as a day on which all governments should promote and uphold the principles of democratic government. Democracies are systems of government in which citizens can exercise their power by voting.

The UN organizes official global events each year to raise public awareness of Democracy in action. Past topics have included fostering civility in society, encouraging young people to participate in democratic movements, and addressing sustainable development. This year’s issue and events are available to learn more about.

We have a duty as citizens to vote, but we shouldn’t go into the polls without any knowledge of what we’re voting for. Become familiar with the forthcoming local, state, and federal candidates by spending some time today. Take the time to verify that the candidates you’re voting for represent your principles, will serve their constituents, and will make choices in the best interests of your town. Wise Voter is an excellent resource for citizens who want to be well-informed.

You have a lot of influence if you’re a member of a democratic government. To achieve Democracy, you must participate in the process. Our unique system of Democracy is now more accessible than ever because of digital innovations, making it simpler than ever to get involved and make a difference. Democracies are effective because they offer citizens a voice and empower them to effect change.

Which Country is not under Democracy?

Saudi Area is not under Democracy.