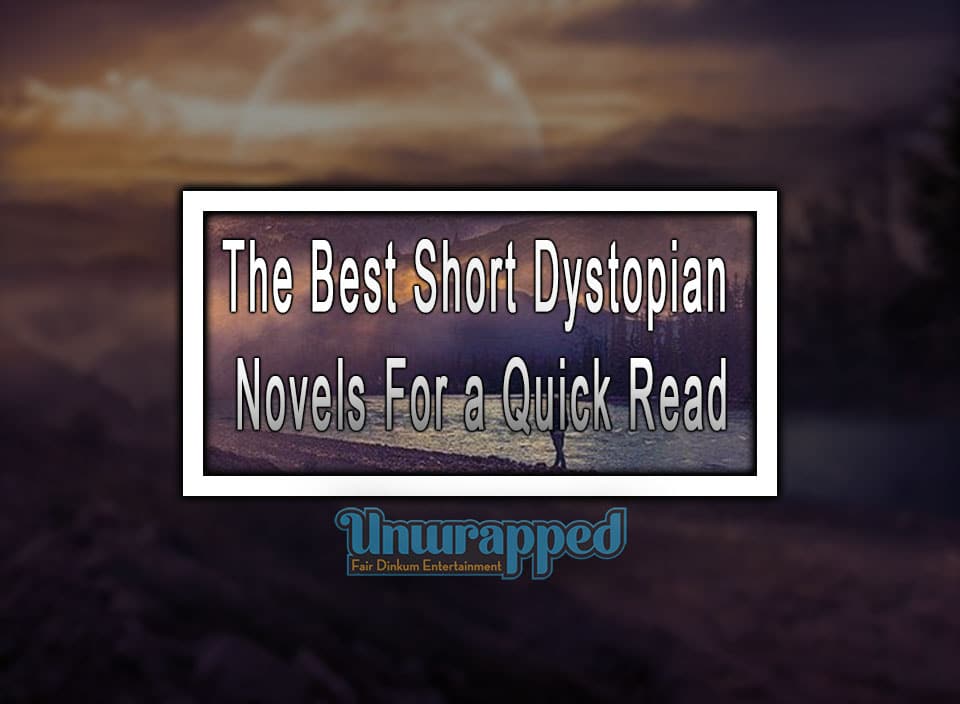 Dystopian literature can be a fun yet disturbing read. However, sometimes they can take too long to read. There’s only so much that you can focus on before you lose interest, which is why some epic books can only be finished by the most dedicated of readers.

Some short dystopian novels can convey the tales contained within them using relatively fewer pages. Literature need not be several chapters long to both entertain and inform. As such, we will be focusing on short dystopian novels, both classic and modern, that can be read through in one sitting.

This novel by E.M. Forster tells the story about an underground world where people are living isolated from each other. Moreover, the population is reliant on a Machine that caters to their needs but is on the verge of breaking down.

The main characters, however, discover that there is life on the surface, and it is there that their dissatisfaction in their current way of life grew. Conflict arises on the life-changing decision on whether they should stay where they are or risk travelling to the surface where their fate cannot be guaranteed.

A classic take on man’s reliance on technology and resistance to change, E.M. Forster’s short novel surprisingly holds true to this day especially when physical distancing is now the new normal. It is a scary take on what may happen should technology further develop and if the pandemic would force us to isolate from each other more.

This short story by Shirley Jackson is one of the scariest realities of a dystopia put on print. It may have even inspired many other works of literature and even other media due to its simple yet terrifying plot. The story has even been banned and received negatively by some of the public due to its dark nature.

The Lottery is the story of an American town where, each year, an annual lottery is held. All residents are included and, through random draws, the unlucky one will be stoned to death by their very neighbours. This tradition came to be so as to be able to continue the community’s well-being.

The story also tells of how other villages have abandoned the tradition, which displayed the residents’ resistance to change. The savagery of normal people being excited from the day of the draw to the actual execution also makes readers question the nature of society and humans as a whole.

Folding Beijing by Hao Jingfang tells a story that seems all too real, especially in this day and age. This Hugo Award-winning science fiction novelette portrays Beijing as a literal folding city where three different classes share the surface, with the lower classes having less than the affluent.

Folding Beijing follows the story of a father that illegally travels between classes to save up enough money for her daughter’s studies. However, he discovers not only illicit affairs but also a conspiracy that made him question their purpose in society.

Themes such as reliance on technology and segregation based on class are very explicit in this story. Folding Beijing also reflects on how China, as well as the rest of the world, can control power by limiting resources to lower classes, preventing them from getting opportunities to rise and make more out of themselves.

We Ate the Children Last

We Ate the Children Last is a short but very chilling story about the discovery of a revolutionary surgical technique involving implanting pig organs into humans. This resulted in instant cures for certain diseases, good health for patients, as well as radical changes in society.

The procedure, however, had unforeseen and disastrous results. This resulted in persecution, execution, and discrimination. The author, within just a couple of pages, was able to tell a realistic tale that depicted the rise and fall of this supposedly life-saving surgical procedure.

Comparisons with the Holocaust cannot be avoided when reading this story, with people being searched for surgical scars and being placed in concentration camps where they are forced to eat each other and then themselves. We Ate the Children Last is a prime example of a short dystopian novel at its finest.

The Pedestrian by Ray Bradbury is about a writer that likes to take walks at night. The world that he lives in, though, has forgotten the joy of taking in the outside air as everyone is busy watching television. Likewise, the printed word is already pretty much dead.

While walking one night, the main character, Leonard Mead, encounters a robotic police car that asks what he is doing out at night. What follows is a conversation that the automaton cannot understand which results in his apprehension.

The Pedestrian is a timely novel to read especially in these times when social media is now the dominant form of entertainment. Profiling is also explicitly prevalent in the story, which is especially important in light of current events being faced by the country and the world over.

The Minority Report by Philip K. Dick is a sci-fi dystopian novel that depicts a world where crime has been eradicated simply because criminals are already being arrested before the act has been done. This is through the use of precogs that the police employ that can predict when crimes would occur and who would commit them.

The story revolves around John Anderton, the head of the Precrime department that is in danger of being arrested due to the system that he himself led. What follows is a suspenseful adventure as tries to find a way how to prove his innocence.

Reliance on the government’s justice system as well as our ability to change our fates is the main themes of the novel. It also depicts how the future cannot be fully determined by any which way, and how we can still decide on our course of action.

Harrison Bergeron by Kurt Vonnegut depicts the America of 2081 to be obsessed with equality. As such, citizens are forced to wear handicaps to remove advantageous attributes such as beauty, gracefulness, and intelligence.

The story follows the parents of the eponymous character as Harrison is kidnapped, only to appear later in the book as he attempts to overthrow the government. However, this failed as he was killed live on television only shortly after taking over the coverage.

Harrison Bergeron depicts the inverse of discrimination, although this concludes with disastrous results. The book serves as a warning to those who are not accepting of differences between people as well as for those who force others into what they fee are the ideal for normality.

The Ones Who Walk Away from Omelas

The Ones Who Walk Away from Omelas is a story of a utopian society with one secret flaw. In this novelette, the inhabitants of Omelas can enjoy blissful existence, with no shortage of supplies and access to advanced technology.

Everyone in Omelas is happy and peaceful, although there is a secret that is revealed only when Omelas’ citizens are old enough to learn the truth. This rotten flaw is that one child is kept under the poorest of conditions as this is considered by the people to be a form of sacrifice for their happy way of life.

Borrowing heavily from the Bible’s concept of having a scapegoat, this short story from Ursula K. Le Guin has religious and social undertones as well as a tone of the uncertain narration. The novelette implies that those who are accepting of Omelas’ ritual choose to walk away from the city, with their fates unknown.

“Repent, Harlequin!” Said the Ticktockman by Harlan Ellison follows the story of a man who goes by the pseudonym Harlequin. His goal is to disrupt the system of a world where everybody is forced to be on time, and the punishment for tardiness is the deduction of one’s life span.

The short story depicts acts of anarchy to disrupt the system, as well as the government’s need for its citizens to comply, no matter the means or the cost. “Repent, Harlequin!” Said the Ticktockman ends with Harlequin being captured and brainwashed so that he would become the new face of compliance.

“Repent, Harlequin!” Said the Ticktockman promotes discussion about regimentation and whether having a system that considers actions contrary to this purpose to be a crime is right or wrong. Clearly, this short story depicts a dystopian society where oppression of individuality is done, and where someone who can instigate change is needed.