The 5 Worst most Brutal Dictatorships of all Time 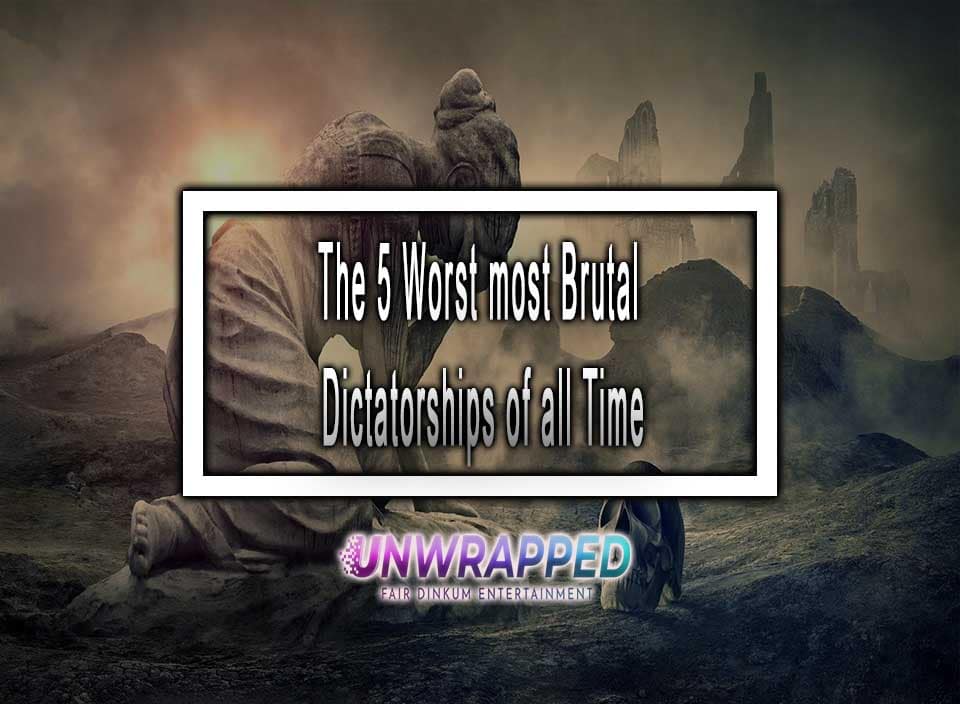 The most loathed dictators enjoy a strange kind of celebrity. Many people can hide until their government becomes increasingly cruel or tyrannical. As a consequence of their odd conduct and a vast record of human rights crimes perpetrated during their leadership, figures like Idi Amin, Muammar Qaddafi, and Kim Jong Il have become household names. Their reputations soared at the end of their reigns when their own people revolted or their tyranny was reaching its end. However, a handful of tyrants now in power across the world are committing crimes on their own people with impunity. Here are the top five most despised dictators in the world.

For many people, the twentieth century was a terrible time to be alive. Totalitarianism, a term that has come to be linked with dictatorship and bloodshed, originated as a result of extreme ideologies and technical breakthroughs. Totalitarianism typically takes the form of a dictatorship, and several tyrants ruled their countries during the twentieth century, plunging them into dystopian nightmares.

These five tyrants left behind some of humanity’s darkest legacies, yet there will always be debates about who was the worst.

Robert Mugabe is widely recognized as one of the world’s worst dictators, having assassinated supporters of his presidential running mate to cement his position as Zimbabwe’s feared, long-term leader. In addition to utilising violence against those who disagree with Mugabe’s ideas, he and his administrative staff routinely give themselves pay raises despite their country’s economic difficulties.

Syria’s current president, following in his father’s footsteps, has been accused of deploying chemical weapons against civilians, slaughtering women and children. Al-Assad has put limitations on social media platforms like YouTube and Facebook, as well as legislation demanding that anything posted on online forums be made public and subject to scrutiny by the Syrian military.

As King of Belgium, Leopold II became known for enslaving Congolese workers in the Congo, which he claimed in Belgium’s name. People in the Congo were compelled to labour in mines and gather ivory for sale. Leopold authorised the use of beatings and brutality to keep the Congolese labourers in line. When beatings weren’t enough, Leopold formed the Force Publique, a private army that burnt down rebel towns and killed as many disobedient civilians as possible.

One of the most well-known tyrants, Joseph Stalin, ruled the Soviet Union with fear and misery. Under Stalin’s leadership, millions of Russian civilians died as a result of his army’s forced labour, famine, and executions.

Nicholas II was Russia’s last and most ruthless king. Nicholas’ most infamous crime has been dubbed “Bloody Sunday.” When peaceful demonstrators conducted a march through St. Petersburg, appealing for better working conditions and the organisation of public assemblies, Nicholas II ordered his military to open fire on the crowd, killing over a thousand people.

The new addition to the list after a brutal and uncalled for invasion of Ukraine. My friend Darleto is tuck there as she has elderly parents and I have lost contact:(. Putin needs to take a long hard look at himself as he will go down on the wrong side of history is continues this brutal occupation.

What Would You Do If Internet Disappeared? (Top 10 Things That...

Complete Guide to Preparing for a Job Interview in 2023