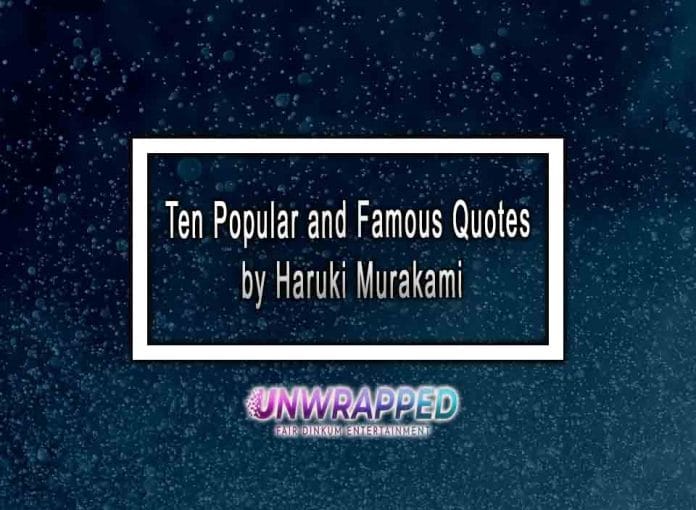 Haruki Murakami, a writer whom I am guessing you love? Here are our 10 best Haruki Murakami quotes for you to enjoy. At Australia Unwrapped we believe every book has at least one quotable line, and our mission is to find them all. Here you will find Haruki Murakami’s top 10 popular and famous quotes. Like every good writer Haruki Murakami made a number of memorable quotes, here are some of our favorites:

Haruki Murakami is a popular contemporary Japanese author and translator. His work has been described as easily accessible, but complex at the same time
As a child, Murakami was heavily influenced by Western culture, especially Western music and literature. He grew up reading works by American writers, including Kurt Vonnegut and Richard Brautigan, and he is distinguished from other Japanese writers by his Western influences.

He met his wife, Yoko, at Waseda University in Tokyo, where he studied drama. He began his career working at a record store-the same place where his main character Toru Watanabe works in Norwegian Wood. After finishing his studies, Murakami and his wife opened “Peter Cat” in Kokubunji, Tokyo, which was a jazz bar in the evening.
Born: January 12, 1949. Kyoto, Japan
Website: http://www.harukimurakami.com
Genre: Fiction, Surrealism, Magical Realism

More from the Author: https://amzn.to/3Nv3CH0

“I think you still love me, but we can’t escape the fact that I’m not enough for you. I knew this was going to happen. So I’m not blaming you for falling in love with another woman. I’m not angry, either. I should be, but I’m not. I just feel pain. A lot of pain. I thought I could imagine how much this would hurt, but I was wrong.”
― Haruki Murakami, South of the Border, West of the Sun

“And once the storm is over, you won’t remember how you made it through, how you managed to survive. You won’t even be sure, whether the storm is really over. But one thing is certain. When you come out of the storm, you won’t be the same person who walked in. That’s what this storm’s all about.”
― haruki murakami

“Why do people have to be this lonely? What’s the point of it all? Millions of people in this world, all of them yearning, looking to others to satisfy them, yet isolating themselves. Why? Was the earth put here just to nourish human loneliness?”
― Haruki Murakami, Sputnik Sweetheart

“Nobody likes being alone that much. I don’t go out of my way to make friends, that’s all. It just leads to disappointment. ”
― Haruki Murakami, Norwegian Wood

“Whatever it is you’re seeking won’t come in the form you’re expecting.”
― Haruki Marukami

“Memories warm you up from the inside. But they also tear you apart.”
― Haruki Murakami, Kafka on the Shore

“If you remember me, then I don’t care if everyone else forgets.”
― Haruki Murakami, Kafka on the Shore

“What happens when people open their hearts?”
“They get better.”
― Haruki Murakami, Norwegian Wood

“Sometimes fate is like a small sandstorm that keeps changing directions. You change direction but the sandstorm chases you. You turn again, but the storm adjusts. Over and over you play this out, like some ominous dance with death just before dawn. Why? Because this storm isn’t something that blew in from far away, something that has nothing to do with you. This storm is you. Something inside of you. So all you can do is give in to it, step right inside the storm, closing your eyes and plugging up your ears so the sand doesn’t get in, and walk through it, step by step. There’s no sun there, no moon, no direction, no sense of time. Just fine white sand swirling up into the sky like pulverized bones. That’s the kind of sandstorm you need to imagine.

An you really will have to make it through that violent, metaphysical, symbolic storm. No matter how metaphysical or symbolic it might be, make no mistake about it: it will cut through flesh like a thousand razor blades. People will bleed there, and you will bleed too. Hot, red blood. You’ll catch that blood in your hands, your own blood and the blood of others.

And once the storm is over you won’t remember how you made it through, how you managed to survive. You won’t even be sure, in fact, whether the storm is really over. But one thing is certain. When you come out of the storm you won’t be the same person who walked in. That’s what this storm’s all about.”
― Haruki Murakami, Kafka on the Shore

More from the Author: https://amzn.to/3Nv3CH0