Symptoms of Pregnancy: How Soon Can You Get? 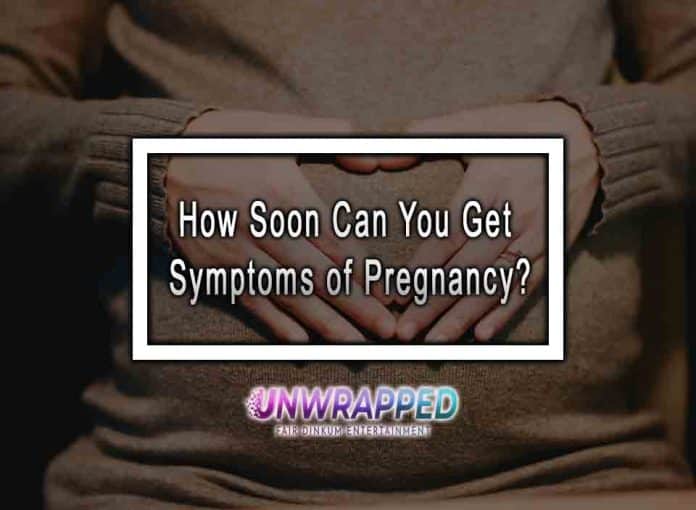 Pregnancy can be an excellent time for a couple that’s looking to start a family. However, what most sex-ed courses don’t teach you is the full range of symptoms that a woman might experience during their first months of pregnancy. What’s even worse is that the duration of these symptoms may cause anxiety to the expectant mother, especially to those who didn’t get much experience with sexual information.

For expectant mothers, the first symptoms of pregnancy usually occur around 4 to 5 days after ovulation. However, it can be quite difficult to fully test for signs of pregnancy during this period so confusion might arise. You can use a pregnancy test to confirm your suspicions but the body only generates enough hormones for a proper pregnancy test around a month after your first period.

There is a whole heap of symptoms that can arise during the early stages of your pregnancy. Keep reading and we’ll go through some of the more common ones you might run into during your first tenure as an expectant mother. We’ll also go through some other details you may need to know about the symptoms of pregnancy.

Must See: Is It Safe To Travel When Pregnant Or With a Newborn

How Soon Can You Get Symptoms Of Pregnancy?

With how variable symptoms can be when it comes to the early stages of pregnancy, testing for pregnancy can be quite difficult. Factors like medication, health issues regarding the ovaries, and menopause can all be causes of false positives. That’s why many experts suggest performing pregnancy tests during the next few weeks after initial ovulation. Some sources state that 11 days post ovulation (DPO) should be just enough time for it.

The reasoning for this is that the hormones that interact with pregnancy tests, Human Chorionic Gonadotropin (hCG), accumulate slowly after implantation. Pregnancy tests done during 5 DPO or earlier tend to be false positives because the body hasn’t produced enough hormones for an accurate test. Another good time for a pregnancy test is the day after a missed period, avoiding much of the stress and anxiety caused by a false positive.

During early pregnancy, a woman might experience several symptoms that are typical for the first trimester. These may include symptoms such as Nausea, Increased rates of Vomiting, Excess Urination, and feelings of fatigue. However, other symptoms are much more subtle compared to other symptoms.

Some common symptoms that might not be as pronounced as other indicators include mood swings caused by the rush of hormones produced by the body. These can cause someone to feel quite emotional towards different things. Another subtle symptom is feelings of cramping and constipation because of both hormonal changes and uterine cramps. Some women even report cases of sensitivity to certain foods and odors, causing their food preferences to change.

Why Can You Feel Pregnant Even When You’re Not?

For some women, the stress and anxiety of potentially being pregnant may cause false symptoms of pregnancy. Imaginary Pregnancy Symptoms or IPS are symptoms that you may experience even if you might not be pregnant. This is usually caused by anxiety and fears regarding pregnancy. These may also be caused by premenstrual hormones produced during periods of PMS.

Premenstrual Syndrome, or PMS, is a different sign indicating that you’re about to get your period. The severity of this syndrome depends on the individual as it may manifest as mild or severe symptoms. Some of these include tender breasts, constipation, clumsiness, and irritability. Some also report feeling tired or fidgety during their experience thanks to the fluctuating hormone levels. Although there are no studies specifically pinning down the causes of PMS, there are some findings that hormones are a significant factor.

If you’re unsure whether you’re truly pregnant or not, you’ll find that going to your physician is a much better method than pregnancy tests or things you find online. When you find that your symptoms are starting to affect your daily schedules and habits, that’s when you should seriously consider scheduling a medical appointment. From there, your doctor can figure out what exactly you can do to alleviate things and make sure everything’s alright.

Can You Get Pregnant Even Without Penetration?

Although the risks are much lower than usual, there are certain cases where you can get pregnant without having penetrative sex. Remember that pregnancy occurs when the male’s sperm cell comes into contact with a partner’s egg cell. If you know that your partner ejaculates anywhere near your vagina, it’s not a total impossibility to become pregnant.

Another potential way that you could get pregnant is with your partner rubbing the tip of their penis on the entrance of your vagina. This is because pre-ejaculate or pre-cum may be produced and already trickling out the entrance. Compared to semen, pre-cum contains fewer sperm cell concentrations. In rare cases, this might be enough to cause egg cell fertilization.

To properly protect yourself from this, you’ll have to be consistent with your usage of contraception. Items like condoms and birth control pills are a good way of preventing unexpected pregnancies. Another method is by using injectables and other contraceptive drugs alongside the previous methods. Finally, we must reiterate that it’s important to avoid unprotected sex and to be careful with who you partner up with.

Also Enjoy: How Soon After Unprotected Can I Test for Pregnancy?

Pregnancy, when planned out, can be a nice experience for women with the help of supportive and loving partners. However, it’s important to learn more about the first trimester as there can be loads of symptoms experienced. It may cause a spike in fear and anxiety for everyone involved, especially the expectant mother. Through education and careful planning, you’ll be able to expect most of the symptoms you’ll be experiencing and prepare for them.

Read More: How Soon After Unprotected Can I Test for Pregnancy?