Meaningful Stoic Quotes About Failure That Will Change Your Life 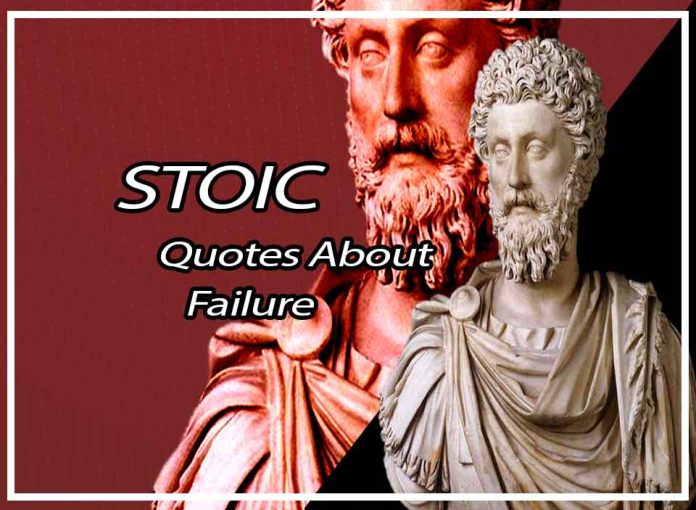 Best Quotes on Failure from Stoicism

As a practicing Stoic, I have used many quotes on Failure to help me, inspire me, or keep me sane. I hope you find some gain and drive in some of Stoicism’s finest quotes on Failure. Developing peace of mind through confidence in one’s abilities is what Stoicism is all about and knowing that this is ancient wisdom, along with applications by modern great, you know the Stoic beliefs stand up.

“A gem cannot be polished without friction, nor a man perfected without trials.”

“How does it help to make troubles heavier by bemoaning them.”

“We suffer more in our imagination than in reality”

“Think your way through difficulties: harsh conditions can be softened, restricted ones can be widened, and heavy ones can weigh less on those who know how to bear them.”

“It isn’t the things themselves that disturb people, but the judgements that they form about them”

“Here is a rule to remember in future, when anything tempts you to feel bitter: not “This is misfortune,” but “To bear this worthily is good fortune.”

“It is not death that a man should fear, but he should fear never beginning to live.”

Stoic Quotes on Failure the Best Quotes From the Stoics

I hope these Failure quotes helped you. Please comment below and share the best Stoic quotes that have benefited you when needing Stoicism’s best quotes on Failure.

More Stoicism: Why Stoicism Promotes Living According to Nature

What is your definition of failure?

Failure refers to the inability to meet an expectation or a lack of success. Too much emphasis is placed on failure. We often equate self-esteem, self-worth, and acceptance with self-worth.