Meaningful Stoic Quotes About Embracing Death That Will Change Your Life 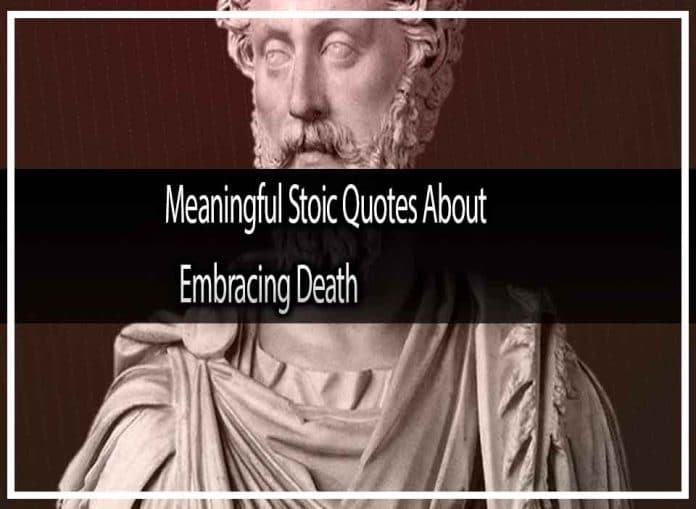 As a practicing Stoic, I have used many quotes on Embracing Death to help me, inspire me, or keep me sane. I hope you find some gain and drive in some of Stoicism’s finest quotes on Embracing Death. Developing peace of mind through confidence in one’s abilities is what Stoicism is all about and knowing that this is ancient wisdom, along with applications by modern great, you know the Stoic beliefs stand up.

“Death has no degrees of greater or less; for it has the same limit in all instances, the finishing of life.”

– Seneca. Letters from a Stoic.

“Very well, what further concern have I? For my part has been fulfilled. The business belongs to someone else, that is, the helmsman. But, more than that, the ship goes down. What, then, have I to do? What I can; that is the only thing I do; I drown without fear, neither shrieking nor crying out against God, but recognizing that what is born must also perish.”

“Stop whatever you’re doing for a moment and ask yourself: Am I afraid of death because I won’t be able to do this anymore?”

“Think of yourself as dead. You have lived your life. Now, take what’s left and live it properly. What doesn’t transmit light creates its own darkness.”

“You can discard most of the junk that clutters your mind — things that exist only there. And you will immediately make vast space for yourself by grasping the whole universe in your thought, by contemplating the eternity of time, and by reflecting on the speed with which things change — each part of everything, the brief gap from birth to death, the infinite time before, and the equally infinite time that follows.”

“Death is neither a good nor a bad thing, for that alone which is something can be a good or a bad thing: but that which is nothing, and reduces all things to nothing, does not hand us over to either fortune, because good and bad require some material to work upon. Fortune cannot take a hold of that which Nature has let go, nor can a man be unhappy if he is nothing.”

“Accept death in a cheerful spirit, as nothing but the dissolution of the elements from which each living thing is composed. If it doesn’t hurt the individual elements to change continually into one another, why are people afraid of all of them changing and separating? It’s a natural thing. And nothing natural is evil.”

“Let death and exile, and all other things which appear terrible be daily before your eyes, but chiefly death, and you will never entertain any abject thought, nor too eagerly covet anything.”

– Seneca. Letters from a Stoic.

“When the longest- and shortest-lived of us dies, their loss is precisely equal. For the sole thing of which any of us can be deprived is the present, since this is all we own, and nobody can lose what is not theirs.”

Stoic Quotes on Embracing Death the Best Quotes From the Stoics

More Stoicism: 5 Drawbacks Of Being A Stoic Person In Modern Life

Is it possible to embrace death?

We experience death in a fundamental and transformative way when we embrace death consciously. We are able to put things into a healthy and empowering perspective because it allows us to remember what truly matters.