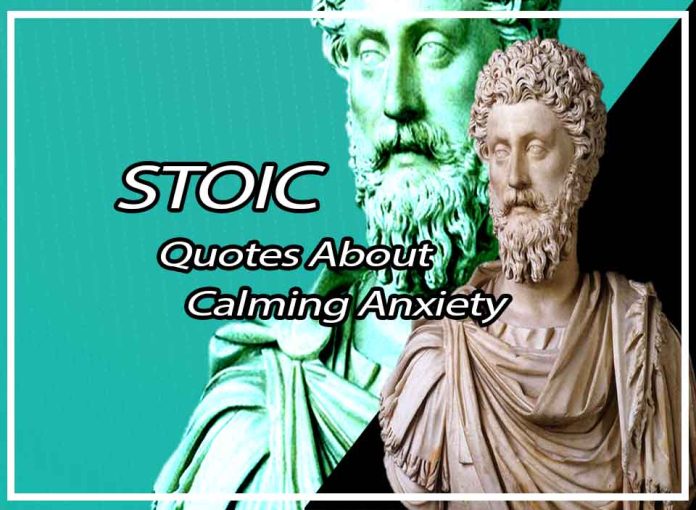 As a practicing Stoic, I have used many quotes on Calming Anxiety to help me, inspire me, or keep me sane. I hope you find some gain and drive in some of Stoicism’s finest quotes on Calming Anxiety. Developing peace of mind through confidence in one’s abilities is what Stoicism is all about and knowing that this is ancient wisdom, along with applications by modern great, you know the Stoic beliefs stand up.

“It is likely that some troubles will befall us; but it is not a present fact. How often has the unexpected happened! How often has the expected never come to pass! And even though it is ordained to be, what does it avail to run out to meet your suffering? Perhaps it will come, perhaps not; in the meantime it is not. So look forward to better things.”

“True happiness is to enjoy the present without anxious dependence upon the future, not to amuse ourselves with either hopes or fears but to rest satisfied, for he that is wants nothing. The greatest blessings of mankind are within us and within our reach. A wise man is content with his lot, whatever it may be, without wishing for what he has not”

“Wild animals run from the dangers they actually see, and once they have escaped them worry no more. We however are tormented alike by what is past and what is to come. A number of our blessings do us harm, for memory brings back the agony of fear while foresight brings it on prematurely. No one confines his unhappiness to the present.”

“But life is very short and anxious for those who forget the past, neglect the present, and fear the future.”

“If then it’s not that the things you pursue or avoid are coming at you, but rather that you in a sense are seeking them out, at least try to keep your judgment of them steady, and they too will remain calm and you won’t be seen chasing after or fleeing from them.”

Stoic Quotes on Calming Anxiety the Best Quotes From the Stoics

I hope these Calming Anxiety quotes helped you. Please comment below and share the best Stoic quotes that have benefited you when facing Calming Anxiety.

Stoicism's opposite is what?

Hedonism and Stoicism view pleasure and pain in polar opposite ways.