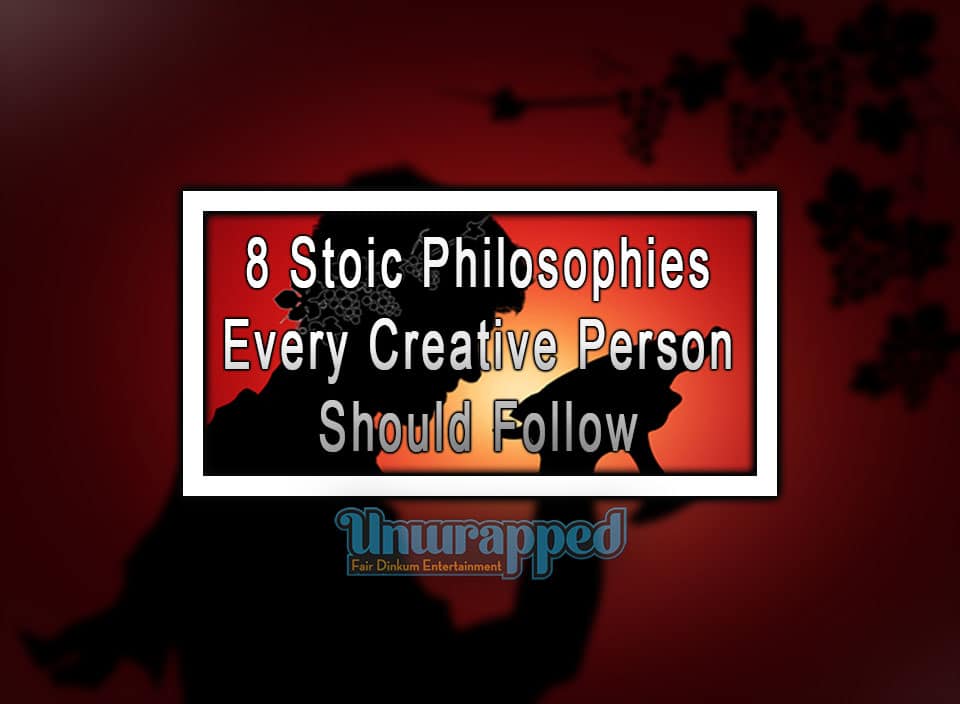 Top 8 Must-Follow Stoic Philosophies for EveryOne

Stoic philosophy has man as its centre of concern. It’s important to understand how the Stoics viewed the world because it is the starting point of their thinking.

Despite the centuries that have passed, Stoic philosophy continues to be valid in an age like the one we are living in. Not so that it is another ornament that takes part of our intellectual life, but because it helps us to know ourselves better: to know our strengths to enhance them and thus turn them into defense instruments against both external and internal difficulties.

For every person engaged in creative work and who is expected to successfully brainstorm daily, Stoicism offers a safe way to solve every tricky situation. Each of these Stoic philosophies can be used and by practicing them you’ll make a progress in every creative process.

1. This Too Shall Pass

One of the basic principles of Aurelio’s philosophy is that, in a great set of circumstances, nothing is forever. To quote a very different philosopher, “Life passes too fast.”

This is not intended to demoralize, but, on the contrary, to liberate. Why waste precious time and energy getting angry about things that don’t matter?

The fact that the marketing manager criticizes the idea of your campaign is not very important, although it seems tremendous at the time. A good dose of perspective can keep you from worrying about problems that will only distract you from what matters.

Who cares if Paula, the designer, thinks your presentation looks like 1993, and what does it matter if Chris, the performance marketer, says your ideas are lousy? Why do you care that Katy from content marketing keeps deleting your text edits?

At the end of the day, you answer only very few people. Why does it matter what the rest think? Instead of being riled up, put your trust in the fact that the people whose opinions matter to you – yours and your team leaders – trust your performance.

Also See: Differences Or Similarities Between Stoicism And Spirituality

If you have a conflict with someone and they are becoming an obstacle or preventing you from achieving your goals, find another way to achieve them. View the situation as an opportunity for creative problem-solving. Adapt.

Your leadership is the starting point to help your team manage conflict at work. Your team needs to know that you are there to listen to them when a conflict arises and to help resolve it. It’s not something they should keep to themselves or be quietly concerned about.

In daily teamwork, encourage differing opinions and encourage those who question ideas to participate. Show your team that by disagreeing they will not think that they work poorly in a team or that they are controversial people.

Instead of yelling and pointing fingers, foster a type of conflict that improves reasoning and results.

5. The Citizen Man of the World

Another of the essential concepts of Stoicism, which will have great importance in your creative fluids, was that of cosmopolitanism. The vision that the Stoics had of the world and its purpose, made rational beings a reflection of Universal Reason and, therefore, related to each other and a common destiny. For this reason, for them, the ideal State is the State without borders or nationalities, where the idea of “citizen of the world” prevails. Natural law must rule over the cosmos and all cities, in a kind of “universal republic.”

6. Focus Only On What You Can Change

Sometimes we become overly distressed when we are not in control of a situation. For example: when a corporate decision is made with which we do not agree when a natural disaster occurs or even when we travel by plane.

But why waste time and energy on something inescapable that doesn’t depend on you? In reality, there are very few things that we can control that depends on our will. Epictetus said that there is only one way to happiness: stop worrying about what is out of your reach.

The Stoics said: “do every act of your life as if it were the last.” If you keep this in mind, you don’t want to waste your time thinking negative things or having an absurd argument with someone. And you can enjoy even the smallest things. Think: what would you have done differently today if it was your last time? Now do it.

Also See: 5 Books You Should Read To Understand Stoicism Fully

8. Focus On The Essentials

Try to ask yourself at all times: “Is this necessary?”, so you don’t dedicate more time to secondary things than they deserve. Devoting your full attention to each thing you do will help you master it much earlier than if you divide yourself into several.

The human being will experience creative blockade again and again throughout his life. That is why the Stoics believed that failure is our best teacher because one only learns from mistakes.

Stoicism was conceived as a way of life. It may be very useful to recover this aspect. Think of all the powers that you are endowed with and prepare to withstand all kinds of tests. You are well armed and ready to take advantage of even the most terrible situations in life.