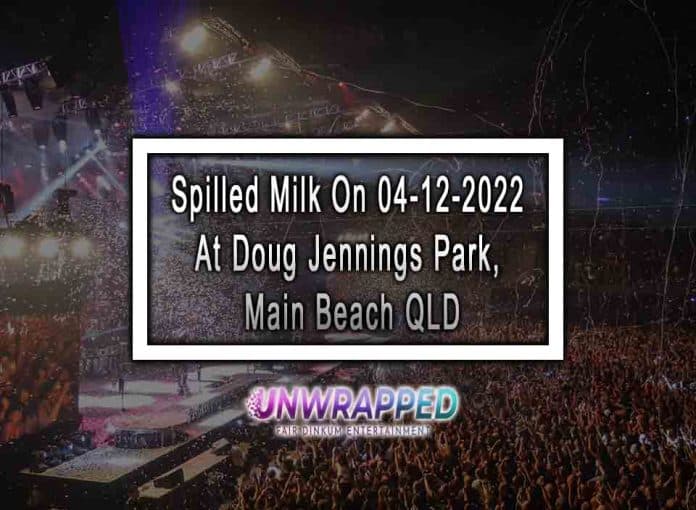 The highly anticipated line-up for Australia’s favorite music, culinary, and art event Spilt Milk, including some of the greatest acts on the stage this summer, was revealed today. The first time Spilt Milk will set foot on Gold Coast soil! Music fans won’t want to potentially miss the opportunity to witness artists like Flume, Stormzy, The Wombats, G Flip, Mallrat, FISHER, Genesis Owusu, Ninajirachi, Spacey Jane, A.GIRL, PEACH PRC, and many more at this event, which is renowned for selling out in a matter of minutes every year. Since its introduction in 2016, Spilt Milk has a history of selling out in less than 30 minutes, so don’t miss the chance to make special memories with them. Join spilt-milk.com.au for pre-sale access for the greatest chance to get these tickets before the crowd.

After a two-year hiatus, the Australian event Spilt Milk will return in November and December. The three confirmed dates for its 2022 incarnation were also announced this morning, 22 Apr, along with the announcement. The event will make its debut at Doug Jennings Park on the Gold Coast in addition to returning to Canberra and Ballarat. On Thursday, 28 Apr, the first line-up announcement for Spilt Milk 2022 is expected. The news will be made at 8 am on triple j’s Breakfast with Bryce & Ebony.

The festival’s pre-sale will start at 8 am local time on 3 May before the main sale begins two days later at 8 am on 5 May. A Girl, Beddy Rays, and Billy Xane will be part of the line-up for the performance. FISHER, Flume, G Flip, Genesis Owusu, Hayden James, Kobie Dee, Latifa Tee, Little Fritter, Mallrat, Mansionair, and Ninajarachi are some of the artists mentioned. PRC Peach. Stand Atlantic, Stormzy, Telenova, The Wombats, and Spacey Jane. Young Franco, Toro y Moi, and YNG Martyr.

Starting on 3 May at 8 am AEST, patrons can purchase pre-sale tickets for the event online. May 5 8:00 a.m. AEST, the normal sale will begin. The two ticket types offered are General Admission and Sitting Pretty. The tickets for the first, second, and third releases will be $129.95, $139.95, and $149.95, respectively. The cost of the Sitting Pretty passes is $299.95. Limited pre-sale tickets will be on sale early for LatitudePay users. It will be possible for attendees to buy tickets and spread the cost over 10 weekly installments without incurring interest.

The likes of Stormzy, the Wombats, Fisher, and Flume, local luminaries Genesis Owusu, Young Franco, and TikTok phenomenon Peach PRC will perform, along with many other outstanding national and international talents that are sure to have your feet moving. In addition to the impressive line-up, Spilt Milk will offer some delectable food collaborations, including with the smokin’ kings of Blackbear Barbeque and the hearty burger queens of Burger Head. Additionally, there will be a tonne of art stalls selling the creations of independent artists, all of which will be fueled by the renowned Studio A.