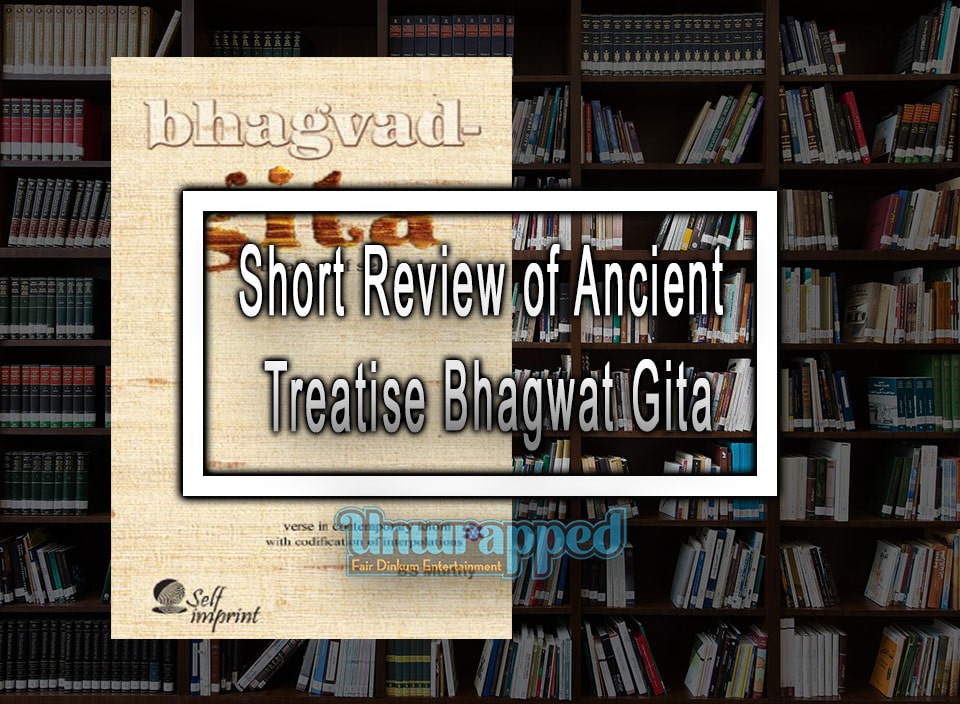 The thing I liked in the book is how the Lord himself explains the concepts of life. Thefact that we all will have some moments in our lives when we will be as puzzled as Arjun is, and we all can turn to Gita’s words for help.

It is an ancient treatise where armies of two warring groups, Pandavas and Kauravas, are ready to fight on the battleground. The war of Mahabharata was fought for eighteen days. Interestingly both Pandavas and Kauravas were cousins. In such circumstances, emotions played a great impediment in killing one’s brothers and relatives. At this stage, Shri Krishna, popularly known as Krishna, appears as a guide and teacher. This gospel of Krishna has been compiled in the form of a Holy Book as Srimadbhagvata.

The uniqueness of the Holy book Srimadbhagvata Gita was preached when armies were ready to fight, propagating the individual duty.

Chapter 2: Arjuna gives the plan to fight and asks Krishna to become his mentor and show him the righteous path. Krishna teaches Arjuna the difference between a mortal body and the spiritual Soul, the true Self.

Chapter 3: Krishna asserts that every human has to engage in activity to fulfil his worldly duties. An action or Karma performed without a selfish motive and for the pleasure of the Supreme does not bind instead liberates.

Chapter 4: Krishna further preaches Arjuna to understand and imbibe the element of metaphysical or spiritual knowledge of the Soul, Supreme, and the relation between them. Krishna also tells Arjuna the importance of a guru.

Chapter 5: Karma Yoga: a wise person performs his action to please the Supreme without aspiring for worldly gains. This smart person has received soul purification through divine knowledge and has learned the qualities of spiritual bliss, detachment from worldly pleasures.

Chapter 6: Dhyana Yoga: One who practices Ashtanga Yoga a complete prescription and process to control one’s mind, senses thereby focusing on Paramatma or Supreme Soul. The Soul situated in humans is also a part of that Paramatma.

Chapter 7: Krishna denotes Supreme Truth and is the leading cause behind all the play going on in the world.

Chapter 8: continuous devotion to Krishna and asking for his benevolence.

Chapter 9: Krishna is the supreme Soul and the Supreme Object of worship; one who worships Krishna through Bhakt or devotion reaches and attains the spiritual goal.

Chapter 10: worldly power and grandeur are the manifestations of the Supreme Lord’s divine energy. Krishna is the source of all, whether it be material or spiritual.

Chapter 12: devotional service or Bhakti is the only way to relate with Supreme or Superconsciousness. Practising in such a way, a human reaches his highest goal to be one with divine energy.

Chapter 13: the knowledge to segregate between the body, the Soul, and the Supreme, making a person attain liberation from the mortal world.

Chapter 15: therefore, one who imbibes the essence of Vedic knowledge and learns to see the truth by detachment attains identity with Krishna, the supreme Lord of the universe.

Chapter 16: human beings following Asuri or demonic qualities and not believing in scriptures see a downfall and do not get free from material bondage.

Chapter 17: Lord Krishna classifies the three divisions of faith, revealing that these qualities of belief in the Supreme determine the character of living entities. The three types of faith determine one’s consciousness in this world.

Chapter 18: Lord Krishna culminates his discussion with Arjuna by stating that karma solves all human problems. One should offer complete devotion to God and do his Karma.. Lord Krishna explains that while doing so, one must offer without reservation everything to Paramatma. Further, Krishna says that the knowledge revealed to Arjuna gets progressively more and more confidential as one proceeds, thus finding one’s own path on this journey is essential.

Short Review of The War of Art by Steven Pressfield