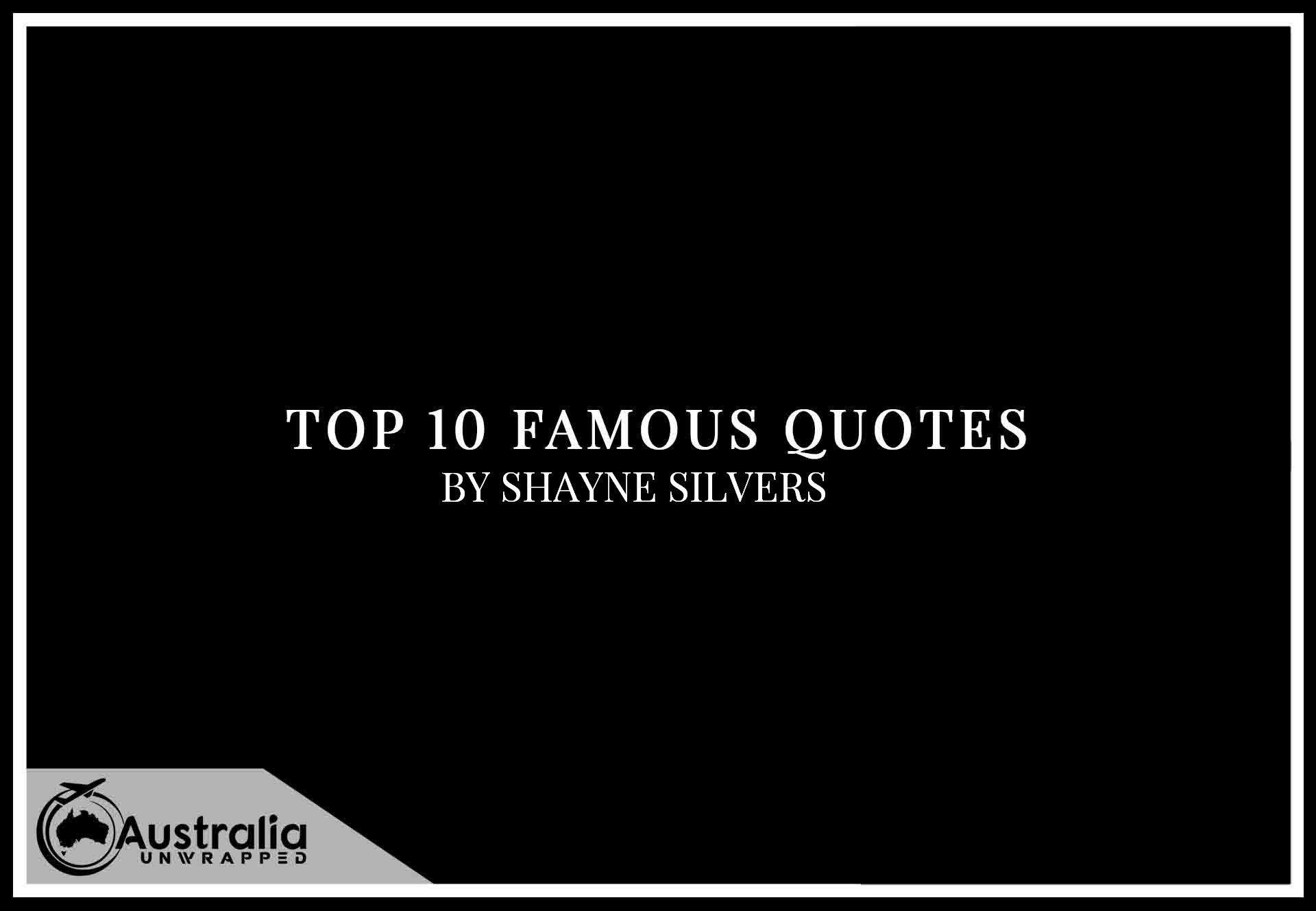 Love reading? Then it’s likely you will love a good quote from your favourite author. This article covers Shayne Silvers’s Top 10 Popular and Famous Quotes that we at Australia Unwrapped have collected from some of his greatest works. Shayne Silvers quotes to remember and here you will find 10 of the best. A memorable quote can stay with you and can be used along your journey. Choosing Shayne Silvers’s top 10 quotes is not easy, but here they are:

“It was a gift of mine. Annoying people to immeasurable levels of hatred.”
― Shayne Silvers, Grimm

“It’s never good when you blindly follow some belief system or group of people without consciously deducing whether what they do is right or wrong. The number one test is to wonder what would happen if you openly, but respectfully, questioned your commander’s decision when you think it’s wrong. If the answer in any way resembles punishment, pain, or ridicule, rather than an explanation, you are probably not working for the good guys.” Gavin”
― Shayne Silvers, The Nate Temple Supernatural Thriller Box Set

“You see, women spoke on many different levels. Men were snipers, focusing only on the one thing directly in front of us, where women were raging cyclones of a dozen assassins hidden inside a single person. Their conversations sliced and diced an innocent gentleman on several planes of existence… at the same time, and without him being aware of the fatality.”
― Shayne Silvers, Blood Debts

“War is wild, but one must know when to be wild, and when to keep calm. Too cold, and you become calloused, brittle, and breakable. Too hot, and your emotions rule you, stealing your control. But to be strategically ruthless? Analytically wild? In a General, these qualities are priceless. For everything else, there’s soldiers,”
― Shayne Silvers, Wild Side

“Paperback and buckram books decorated the floor, torn open to leave loose pages lying about like the useless guts of an eviscerated animal. Fury smoldered deep down inside my stomach, as if I were looking at heaps of dead children lying about the room instead. Books were my children. It was sacrilegious. Hundreds”
― Shayne Silvers, The Nate Temple Supernatural Thriller Box Set

“Here’s the thing about vampires: I hate them. Have for years. They’re like cockroaches. I mean I get it: they’re simply scuttling around doing what they need to do to survive just like the rest of us. But that doesn’t mean I don’t feel the urge to squeal and stomp the second I see one.”
― Shayne Silvers, Whiskey Ginger

“I had entered that critical stage in a woman’s life – that place when emotion starved to death and the only two options left to fill that void was to become a serial killer or to take a long, hot shower.”
― Shayne Silvers, Whispers

“Any man of God who actively condones hatred of another group, especially blanket hate for any people different from himself, has lost his way. Truly.”
― Shayne Silvers, Rage

“I spotted a shiny item on the ground, and like all girls, squirrels, and toddlers, I made a move to grab it.”
― Shayne Silvers, Grimm

“An old Cherokee man was teaching his grandson about life. “A fight is going on inside me,” he told the boy. “It is a terrible fight between two wolves. One is evil — he is anger, envy, sorrow, regret, greed, arrogance, self-pity, guilt, resentment, inferiority, lies, false pride, superiority, and ego.” After a few moments to make sure he had the boy’s undivided attention, he continued. “The other wolf is good — he is joy, peace, love, hope, serenity, humility, kindness, benevolence, empathy, generosity, truth, compassion, and faith. The same fight is going on inside of you, boy, and inside of every other person, too.” The grandson thought about this for a few minutes before replying. “Which wolf will win?” The old Cherokee man simply said, “The one you feed, boy. The one you feed…”― Shayne Silvers, The Nate Temple Supernatural Thriller Box Set