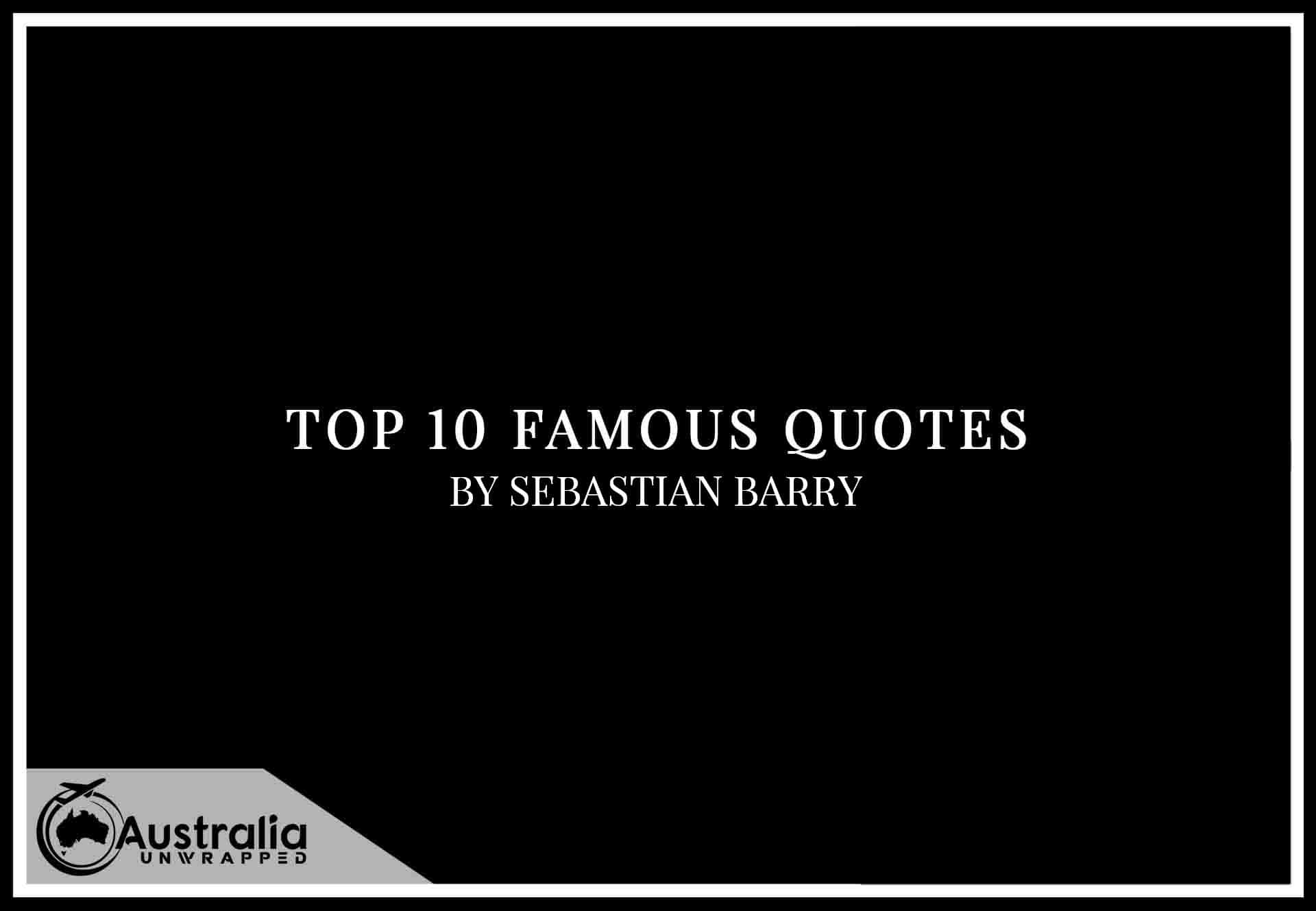 Love reading? Then it’s likely you will love a good quote from your favourite author. This article covers Sebastian Barry’s Top 10 Popular and Famous Quotes that we at Australia Unwrapped have collected from some of his greatest works. Sebastian Barry quotes to remember and here you will find 10 of the best. A memorable quote can stay with you and can be used along your journey. Choosing Sebastian Barry’s top 10 quotes is not easy, but here they are:

“We have our store of days and we spend them like forgetful drunkards.”
― Sebastian Barry, Days Without End

“For myself, hand on heart, those things never bothered me. It is one of the graces of married life that for some magical reason we always look the same to each other. Even our friends never seem to grow old. What a boon that is, and never suspected by me when I was young. But I suppose, otherwise, what would we do? There has never been a person in an old people’s home that hasn’t looked around dubiously at the other inhabitants. They are the old ones, they are the club that no one wants to join. But we are never old to ourselves. That is because at close of day the ship we sail in is the soul, not the body.”
― Sebastian Barry, The Secret Scripture

“Time was not something then we thought of as an item that possessed an ending, but something that would go on forever, all rested and stopped in that moment. Hard to say what I mean by that. You look back at all the endless years when you never had that thought. I am doing that now as I write these words in Tennessee. I am thinking of the days without end of my life. And it is not like that now.”
― Sebastian Barry, Days Without End

“I knew immediately something was terribly wrong, but you can know that and not allow the thought in your head, at the front of your head. It dances around at the back, where it can’t be controlled. But the front of the head is where the pain begins.”
― Sebastian Barry, The Secret Scripture

“A man’s memory might have only a hundred clear days in it and he has lived thousands. Can’t do much about that. We have our store of days and we spend them like forgetful drunkards.”
― Sebastian Barry, Days Without End

“It is always worth itemising happiness, there is so much of the other thing in a life, you had better put down the markers for happiness while you can.”
― Sebastian Barry, The Secret Scripture

“It is very difficult to be a hero without an audience, although, in a sense, we are each the hero of a peculiar, half-ruined film called our life.”
― Sebastian Barry, The Secret Scripture

“After all the world is indeed beautiful and if we were any other creature than man we might be continuously happy in it.”
― Sebastian Barry, The Secret Scripture

“Because it strikes me there is something greater than judgement. I think it is called mercy.”
― Sebastian Barry, The Secret Scripture

“That is because at the close of the day the ship we sail in is the soul, not the body.”
― Sebastian Barry, The Secret Scripture

“And all those boys of Europe born in those times, and thereabouts those times, Russian, French, Belgian, Serbian, Irish, English, Scottish, Welsh, Italian, Prussian, German, Austrian, Turkish – and Canadian, Australian, American, Zulu, Gurkha, Cossack, and all the rest – their fate was written in a ferocious chapter in the book of life, certainly. Those millions of mothers and their million gallons of mother’s milk, millions of instances of small talk and baby talk, beatings and kisses, ganseys and shoes, piled up in history in great ruined heaps, with a loud and broken music, human stories told for nothing, for ashes, for death’s amusement, flung on the mighty scrapheap of souls, all those million boys in all their humours to be milled by the millstones of a coming war.”― Sebastian Barry, A Long Long Way