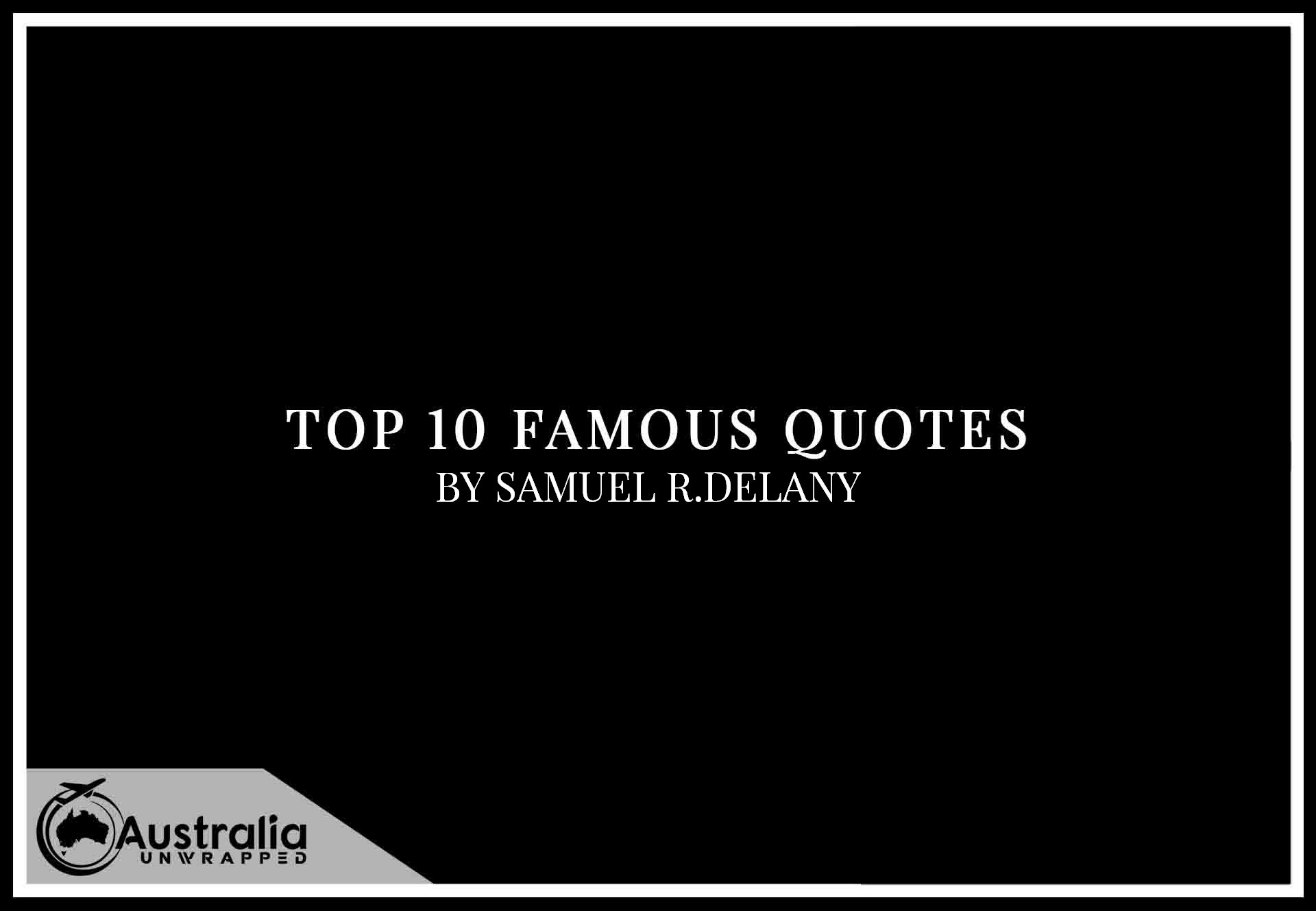 Love reading? Then it’s likely you will love a good quote from your favourite author. This article covers Samuel R. Delany’s Top 10 Popular and Famous Quotes that we at Australia Unwrapped have collected from some of his greatest works. Samuel R. Delany quotes to remember and here you will find 10 of the best. A memorable quote can stay with you and can be used along your journey. Choosing Samuel R. Delany’s top 10 quotes is not easy, but here they are:

“Endings to be useful must be inconclusive.”
― Samuel R. Delaney

“But I realized something. About art. And psychiatry. They’re both self-perpetuating systems. Like religion. All three of them promise you a sense of inner worth and meaning, and spend a lot of time telling you about the suffering you have to go through to achieve it. As soon as you get a problem in any one of them, the solution it gives is always to go deeper into the same system. They’re all in rather uneasy truce with one another in what’s actually a mortal battle. Like all self-reinforcing systems. At best, each is trying to encompass the other two and define them as sub-groups. You know: religion and art are both forms of madness and madness is the realm of psychiatry. Or, art is the study and praise of man and man’s ideals, so therefore a religious experience just becomes a brutalized aesthetic response and psychiatry is just another tool for the artist to observe man and render his portraits more accurately. And the religious attitude I guess is that the other two are only useful as long as they promote the good life. At worst, they all try to destroy one another. Which is what my psychiatrist, whether he knew it or not, was trying, quite effectively, to do to my painting. I gave up psychiatry too, pretty soon. I just didn’t want to get all wound up in any systems at all.”
― Samuel R. Delany, Dhalgren

“I was a young black man, light-skinned enough so that four out of five people who met me, of whatever race, assumed I was white…. I was a homosexual who now knew he could function heterosexually.

And I was a young writer whose early attempts had already gotten him a handful of prizes….

So, I thought, you are neither black nor white.

You are neither male nor female.

And you are that most ambiguous of citizens, the writer.

There was something at once very satisfying and very sad, placing myself at this pivotal suspension. It seemed, in the park at dawn, a kind of revelation–a kind of center, formed of a play of ambiguities, from which I might move in any direction. ”
― Samuel R. Delany, The Motion Of Light In Water: Sex And Science Fiction Writing In The East Village

“In a very real way, one writes a story to find out what happens in it. Before it is written it sits in the mind like a piece of overheard gossip or a bit of intriguing tattle. The story process is like taking up such a piece of gossip, hunting down the people actually involved, questioning them, finding out what really occurred, and visiting pertinent locations. As with gossip, you can’t be too surprised if important things turn up that were left out of the first-heard version entirely; or if points initially made much of turn out to have been distorted, or simply not to have happened at all.”
― Samuel R. Delany, The Jewel-Hinged Jaw: Notes on the Language of Science Fiction

“It is a magic book. Words mean things. When you put them together they speak. Yes, sometimes they flatten out and nothing they say is real, and that is one kind of magic. But sometimes a vision will rip up from them and shriek and clank wings clear as the sweat smudge on the paper under your thumb. And that is another kind.”
― Samuel R. Delany, Equinox

“Sometimes you want to say things, and you’re missing an idea to make them with, and missing a word to make the idea with. In the beginning was the word. That’s how somebody tried to explain it once. Until something is named, it doesn’t exist.”
― Samuel R. Delany, Babel-17

“You meet a new person, you go with him and suddenly you get a whole new city…you go down new streets, you see houses you never saw before, pass places you didn’t even know were there. Everything changes.”
― Samuel R. Delany, Dhalgren

“The only important elements in any society are the artistic and the criminal, because they alone, by questioning the society’s values, can force it to change.”
― Samuel R. Delany, Empire Star

“ABSTRACT THOUGHTS in a blue room; Nominative, genitive, etative, accusative one, accusative two, ablative, partitive, illative, instructive, abessive, adessive, inessive, essive, allative, translative, comitative. Sixteen cases of the Finnish noun. Odd, some languages get by with only singular and plural. The American Indian languages even failed to distinguish number. Except Sioux, in which there was a plural only for animate objects. The blue room was round and warm and smooth. No way to say warm in French. There was only hot and tepid If there’s no word for it, how do you think about it? And, if there isn’t the proper form, you don’t have the how even if you have the words. Imagine, in Spanish having to assign a sex to every object: dog, table, tree, can-opener. Imagine, in Hungarian, not being able to assign a sex to anything: he, she, it all the same word. Thou art my friend, but you are my king; thus the distinctions of Elizabeth the First’s English. But with some oriental languages, which all but dispense with gender and number, you are my friend, you are my parent, and YOU are my priest, and YOU are my king, and YOU are my servant, and YOU are my servant whom I’m going to fire tomorrow if YOU don’t watch it, and YOU are my king whose policies I totally disagree with and have sawdust in YOUR head instead of brains, YOUR highness, and YOU may be my friend, but I’m still gonna smack YOU up side the head if YOU ever say that to me again;
And who the hell are you anyway . . .?”― Samuel R. Delany, Babel-17