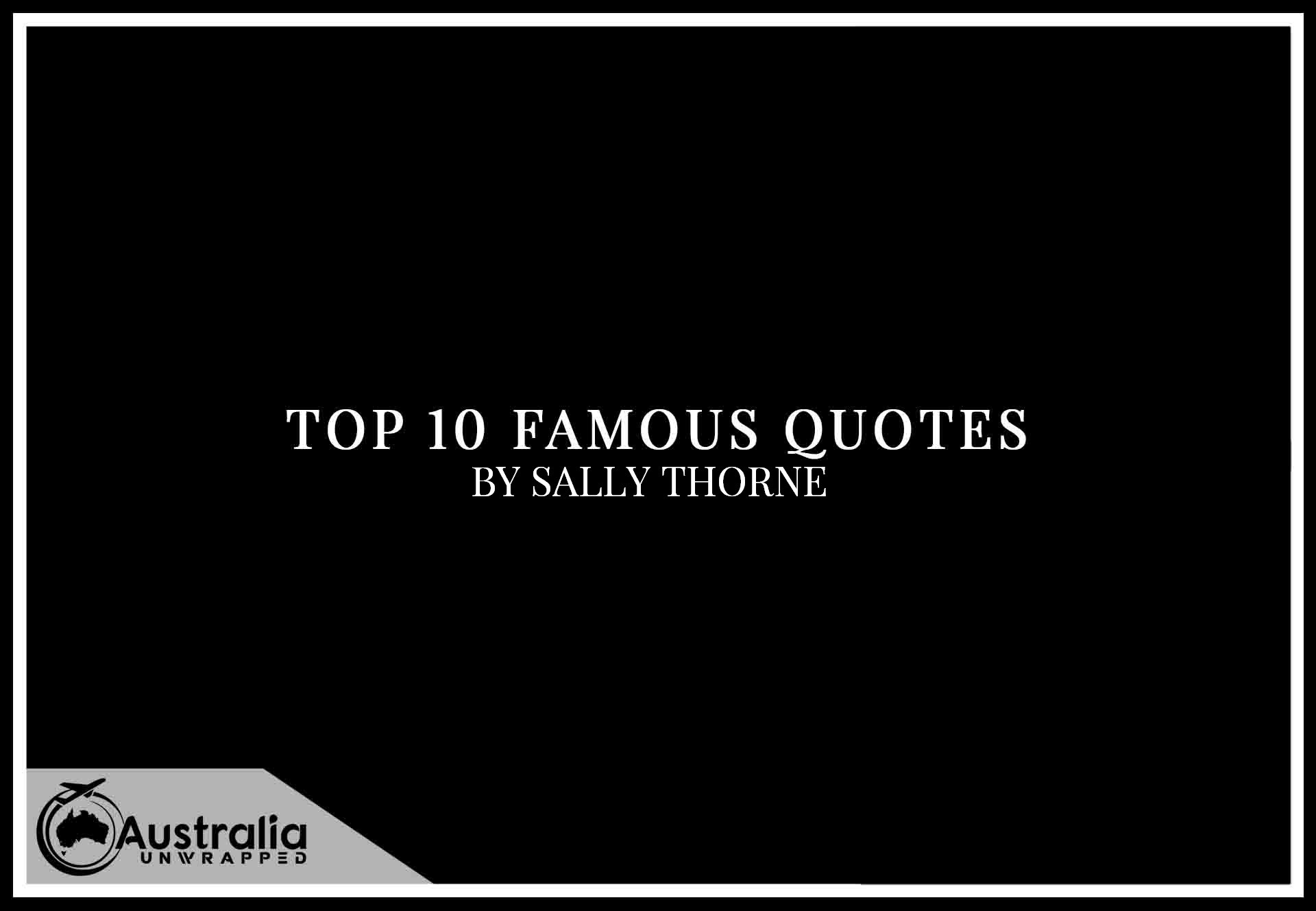 Love reading? Then it’s likely you will love a good quote from your favourite author. This article covers Sally Thorne’s Top 10 Popular and Famous Quotes that we at Australia Unwrapped have collected from some of his greatest works. Sally Thorne quotes to remember and here you will find 10 of the best. A memorable quote can stay with you and can be used along your journey. Choosing Sally Thorne’s top 10 quotes is not easy, but here they are:

“Watching you pretend to hate the nickname is the best part of my day.”
― Sally Thorne, The Hating Game

“He glances over his shoulder, no doubt hearing my insanely loud shoes stop in their tracks. Then he looks again. It’s a double take for the record books.

“I’m out stalking,” I call. It doesn’t come out the way I’d intended. It’s not lighthearted or funny. It comes out like a warning. I’m one scary bitch right now. I hold my hands up to show I’m not armed. My heart is racing.

“Me too,” he replies. Another cab cruises past like a shark.

“Where are you actually going?” My voice rings down the empty street.

“I just told you. I’m going out stalking.”

“What, on foot?” I come closer by another six paces. “You were going to walk?”

“I was going to run down the middle of the street like the Terminator.”

The laugh blasts out of me like bah.I’m breaking one of my rules by grinning at him, but I can’t seem to stop.

“You’re on foot, after all. Stilts.” He gestures at my sky-high shoes.

“It gives me a few extra inches of height to look through your garbage.”

“Find anything of interest?” He strolls closer and stops until we have maybe ten paces between us. I can almost pick up the scent of his skin.

“So, how was work? You clearly missed me.”

I put my hands on my face in embarrassment and he just laughs a bit to himself.

“No one to antagonize, huh?”

“I tried abusing some of the gentle folk in payroll but they got all teary.”

“The trick is to find that one person who can give it back as good as they can take it.” He takes out a pan and begins to fry the vegetables in a single, stingy drop of oil.

“Sonja Rutherford, probably. That scary lady in the mailroom that looks like an albino Morticia Addams.”

“Don’t line my replacement up too quick. You’ll hurt my feelings.”
― Sally Thorne, The Hating Game

“What are you imagining? Your expression is filthy.”

“Strangling you. Bare hands.” I can barely get the words out. I’m huskier than a phone-sex operator after a double shift.

“So that’s your kink.” His eyes are going dark.

“Only where you’re concerned.”

Both his eyebrows ratchet up, and he opens his mouth as his eyes go completely black, but he does not seem to be able to say a word.

It is wonderful.”
― Sally Thorne, The Hating Game

“Truth or Dare,” he says. He always knows the exact right thing to say.

“Coward. Okay, I dare you to eat the entire jar of hot mustard I have in my fridge.”

“I was hoping for a sexy dare.”

“Shyness takes so many different forms. Some people are shy and soft. Some, shy and hard. Or in Josh’s case, shy, and wrapped in military-grade armor. “Josh,”
― Sally Thorne, The Hating Game

“The trick is to find that one person who can give it back as good as they can take it.”
― Sally Thorne, The Hating Game

“I want to know what’s going on in your brain. I want to juice your head like a lemon.”
― Sally Thorne, The Hating Game

“Books were, and always would be, something a little magic and something to respect.”
― Sally Thorne, The Hating Game

“How You Doing, Little Lucy?” His bright tone and mild expression indicates we’re playing a game we almost never play. It’s a game called How You Doing? and it basically starts off like we don’t hate each other. We act like normal colleagues who don’t want to swirl their hands in each other’s blood. It’s disturbing.

“Great, thanks, Big Josh. How You Doing?”

“Super. Gonna go get coffee. Can I get you some tea?” He has his heavy black mug in his hand. I hate his mug.

I look down; my hand is already holding my red polka-dot mug. He’d spit in anything he made me. Does he think I’m crazy? “I think I’ll join you.”

We march purposefully toward the kitchen with identical footfalls, left, right, left, right, like prosecutors walking toward the camera in the opening credits of Law & Order. It requires me to almost double my stride. Colleagues break off conversations and look at us with speculative expressions. Joshua and I look at each other and bare our teeth. Time to act civil. Like executives.

“Ah-ha-ha,” we say to each other genially at some pretend joke. “Ah-ha-ha.”

We sweep around a corner. Annabelle turns from the photocopier and almost drops her papers. “What’s happening?”

Joshua and I nod at her and continue striding, unified in our endless game of one-upmanship. My short striped dress flaps from the g-force.

“Mommy and Daddy love you very much, kids,” Joshua says quietly so only I can hear him. To the casual onlooker he is politely chatting. A few meerkat heads have popped up over cubicle walls. It seems we’re the stuff of legend. “Sometimes we get excited and argue. But don’t be scared. Even when we’re arguing, it’s not your fault.”

“It’s just grown-up stuff,” I softly explain to the apprehensive faces we pass. “Sometimes Daddy sleeps on the couch, but it’s okay. We still love you.”― Sally Thorne, The Hating Game