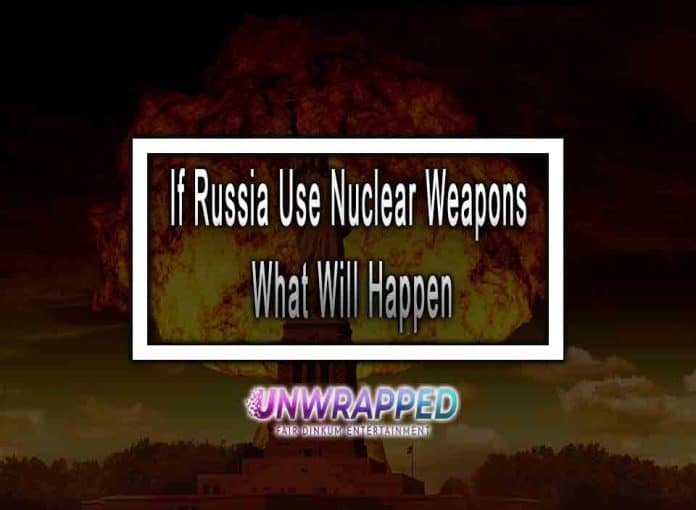 Will Russia Use Nuclear Weapons On US (The World)

To get this out the way early on the use of nuclear weapons by Russia or anyone else by that matter is likely the optimal definition of insanity. Nuclear weapons create only a lose-lose, and who the heck wants that.

In the event Nuclear weapons are unleashed, we all die, and the earth and all who sail upon her suffer tremendously during the extinction period. If Nukes were ever used then basically everything and everyone is erased, history is erased and the gift the universe has bestowed upon us vanished in hell’s fury.

Clear this is not a post on glorification in any way of hurting, destroying and decimating others. Nor is it a commentary on Russia itself. This post attempts to explain all too real what exactly would be likely to happen if Russia (or anyone) used Nuclear Weapons.

What Happening in the Event of a Nuclear Attack

How Many Nukes on Earth

Approximately 13,000 nuclear weapons will exist by 2022, thousands of which are at high alert.

How Many Does it Take for Catastrophe

There is no doubt that even 100 nuclear weapons are sufficient to radically change the global landscape, and Pearce and Denkenberger argue that it is sufficient to deter other nations as well.

What Happens When the Fist Bomb Hits

Blinding flash can temporarily blind you for less than a minute.
Shock Waves can cause death, injury, and structural damage several miles in the vicinity of the blast.
Body cells can be damaged by radiation. Radiation sickness can result from large exposures.
A fire or a heatwave can cause death, burn injuries, and structural damage miles away.
Electric power equipment and electronics can be damaged by electromagnetic pulses (EMPs) impacting several miles away from the explosion and causing temporary disruptions.

Radiation in the fallout will cause visible dirt, debris, and radioactive particles to rain down from several miles above.

The potential aftermath of a nuclear conflict could include firestorms, a nuclear winter, widespread radiation sickness from fallout, and/or the eventual (if not permanent) destruction of much modern technology due to electromagnetic pulses, in addition to the immediate destruction of cities from nuclear explosions. There would be a famine that would kill billions by starvation if the world’s food production fell by 90 per cent. Under this scenario, fewer than a quarter of the population survive after two years.

More Reading: How To Survive a Nuclear War Or an Alien Invasion? Part 1

There is a climatic theory called nuclear winter that describes the effects of atomic war. Black, sooty smoke from nuclear warhead fires. The Sun would heat the smoke emitted by cities and industrial facilities. Smoke would rise into the stratosphere and spread worldwide over a prolonged period.

The effects of a nuclear war with just 100 weapons would be so severe that more than two billion of us would suffer mass starvation if a nuclear war occurred anywhere in the world.

Read This: How To Survive a Nuclear War Or an Alien Invasion? Part 2

After a nuclear explosion, radioactive fallout is propelled into the atmosphere. It is called fallout because it “falls out of the sky” after the explosion and shockwave have passed. When a nuclear weapon explodes, it leaves behind radioactive dust and ash.

Leukemia was the most lethal of the long-term effects suffered by bomb survivors. The number of leukemia cases increased about two years after the attacks and peaked four to six years after that. The most severely afflicted group was children.

Upon detonating a nuclear weapon, blast and thermal radiation, as well as ionizing radiation, cause significant damage. As a result, delayed effects can cause prolonged damage, ranging from a few hours to many years, as well as radioactive fallout and other environmental effects.

Read On: North Korea Nuclear Weapons and Its Potential Effect on Australia

Radioactive particles often have half-lives ranging from seconds to a few months. Atomic fallout generally carries most particles that decay rapidly, but some will take months or even years to decay. Radioactive isotopes, such as strontium-90 and caesium-137, are long-lived and can produce radioactive hot spots for up to five years after an explosion.

So What Happens if Russia Drops a Nuke

We are all fucked.

Love yourself and love your neighbour.

Hosea 8:7: “For they have sown the wind, and they shall reap the whirlwind.”

Keep Reading: Australia Must Invest in Nuclear Technology to Secure Its Future