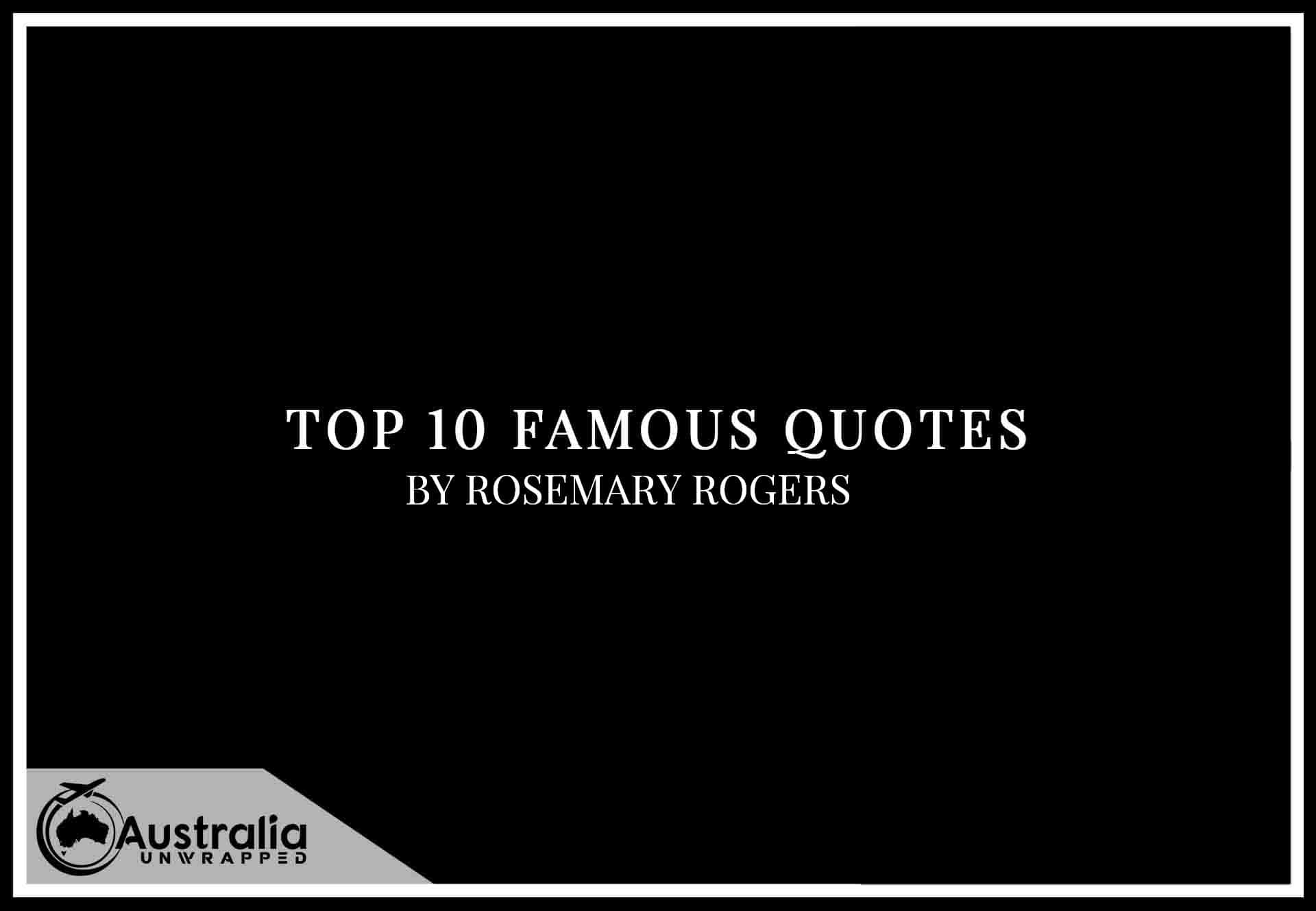 Love reading? Then it’s likely you will love a good quote from your favourite author. This article covers Rosemary Rogers’s Top 10 Popular and Famous Quotes that we at Australia Unwrapped have collected from some of his greatest works. Rosemary Rogers quotes to remember and here you will find 10 of the best. A memorable quote can stay with you and can be used along your journey. Choosing Rosemary Rogers’s top 10 quotes is not easy, but here they are:

“I find that by some unfortunate chance I continue to want you, you jade-eyed sorceress with your wanton gold body and your calculating little mind!”
― Rosemary Rogers, Love Play

“His lips touched the back of her neck and moved along her stubborn shoulder. One hand stroked her breasts, and the other moved unerringly between her thighs; he found the most sensitive part of her and moved against her and in her until her half-formed protests turned into soft, stifled moans. The moon moved lower in the sky, tangling itself in her eyes until he closed them with surprisingly gentle kisses. Her body was the ocean and his was the wild wind — turning ripples into foam-capped breakers that soared and curved translucently before they crashed into oblivion against distant shores.”
― Rosemary Rogers, Wicked Loving Lies

“Once she had managed to compose herself enough for sleep, Sara slept as if she never wanted to wake up. In her dreams she was pursued by a great beast of a wolf with slavering jaws and eyes that glowed redly in the night. And in spite of the fact that she knew he could overtake her with a single bound, he preferred to stay just behind her, toying with her, letting her exert herself until her heart was bursting; waiting until it was his whim to close his jaws about her throat, taking her to oblivion — taking her at last . . .”
― Rosemary Rogers, Love Play

“We gave each other, with our bodies, the commitment that neither of us dared put into words. We mated. There is no other word for it. We were equal—man and woman; neither asking what we could not give. And later, when the fury of passion had died away into peace and we were content to lie together, still part of each other, I remember thinking that whatever happened later I would always have something that could not be taken from me or lost. An unchangeable moment, encapsulated in time.”
― Rosemary Rogers, The Wildest Heart

“Laura decided to send a cable to Lady Honoria after all, on the chance that she might still reach her in Baden-Baden. But while she was planning what to say, she felt, all of a sudden, the room start to spin about her, dizzying her, so that she fell back across the bed and across the pillows wondering what was happening to her until everything went as pitch-black as night and she sank down and down and down into a dark, endless tunnel.”
― Rosemary Rogers, Bound by Desire

“But why on earth not? What has got into you?” “Rowena—dear God, do you take me for a man of steel? Or not as a man at all? Don’t you realize what it means to see you every day, to be constantly with you, knowing that you are promised to my uncle and that I can never possess you?” “I’m sorry, Mark. I hadn’t thought—that is, I thought you had forgotten all about your infatuation for me.”
― Rosemary Rogers, The Wildest Heart

“Oh, he’d be back all right! Giving her the last laugh before she moved out. And that was why she hadn’t moved out yet. Just knowing she could, anytime she wanted to, made all the difference, of course. She’d just wait for him to succumb one more time, that was all. One more time — proving to him that he still wanted her before she disappeared out of his life for good.”
― Rosemary Rogers, Love Play

“Sara fled upstairs as if the devil himself had been after her, leaning, gasping for breath against the thick wooden door that had no lock on the inside — symbolic of her position here and a reminder of another age when women had been OWNED like property, and used according to the dictates of the men who possessed them.”
― Rosemary Rogers, Love Play

“Afterward, Sara didn’t really remember falling asleep, still wearing her robe although she meant to get dressed and had had Serafina lay out a pair of jeans and a blouse for her. In any case, she had slept. And there had been dreams — of the unsettling kind she didn’t want to recall.”
― Rosemary Rogers, Love Play

“I’m here to do whatever Mademoiselle might desire me to do for her,” Ayesha said, in her soft voice. “It will be my pleasure to please Mademoiselle in every way.”
― Rosemary Rogers, Bound by Desire

“Lalie had helped her undress, down to her sheer silk shift, and Marisa had removed even that, feeling stifled by the moist heat and the netting over her bed. She slept, but there were strange dreams hovering on the edge of her unconsciousness. She dreamed that Inez came back from the city with a stocky, red-faced man with a sheaf of papers in his hand, and that while they stood looking down at her and talking about her she tried to move and protest, but she was caught in the netting that stopped up her eyes and her mouth. The netting turned into a sea of sand under which she was buried. And somewhere above her, booted feet astride her face, she knew that Dominic stood scowling, as she remembered him last.”― Rosemary Rogers, Wicked Loving Lies