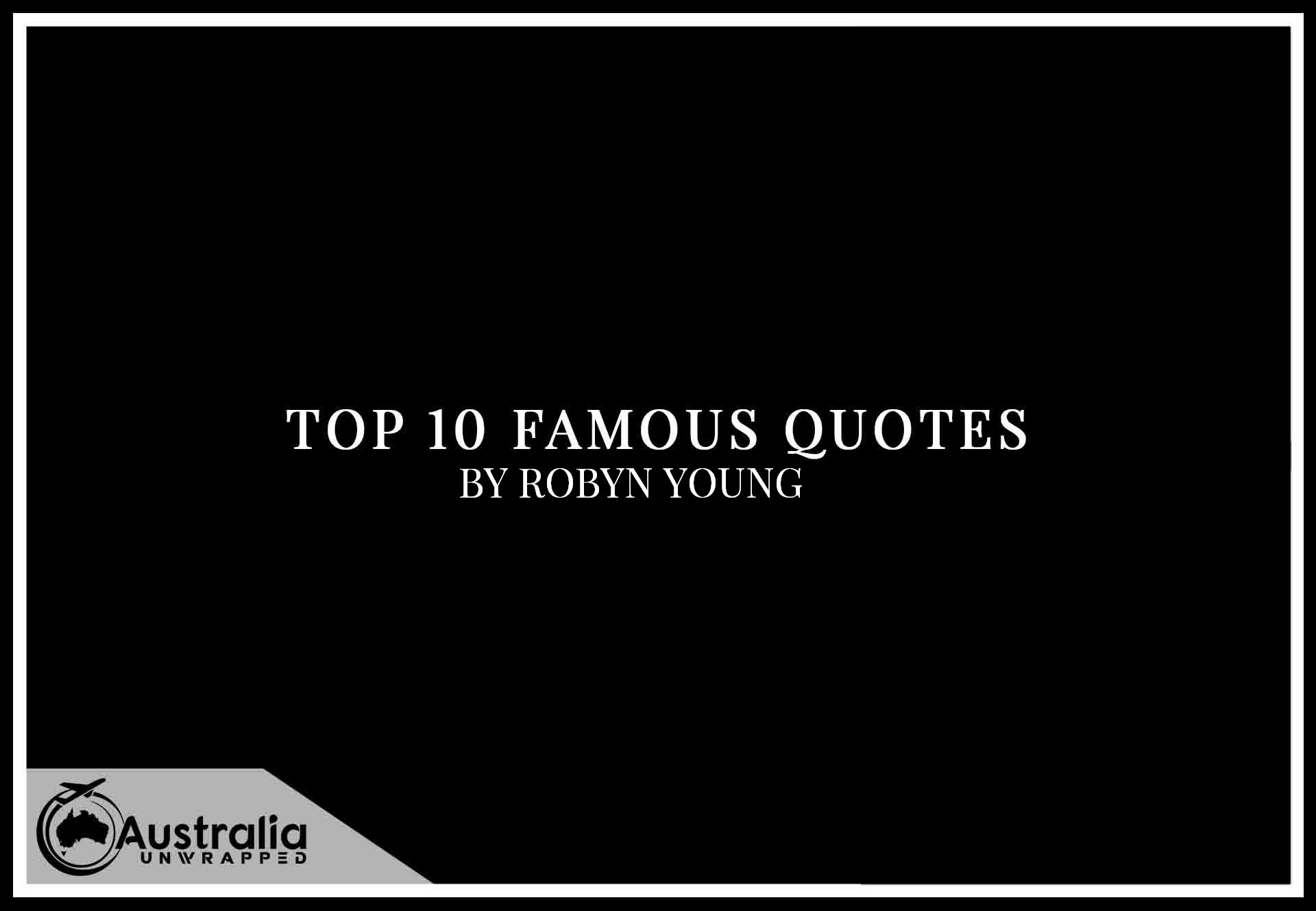 Love reading? Then it’s likely you will love a good quote from your favourite author. This article covers Robyn Young’s Top 10 Popular and Famous Quotes that we at Australia Unwrapped have collected from some of his greatest works. Robyn Young quotes to remember and here you will find 10 of the best. A memorable quote can stay with you and can be used along your journey. Choosing Robyn Young’s top 10 quotes is not easy, but here they are:

“We are our dreams, Robert, and they are us.”
― Robyn Young, Requiem: The Fall of the Templars

“At that moment, Robert saw James Stewart turn to him. A jolt went through him as the steward nodded. Before anyone could begin speaking again, he headed out of the crowd towards Wallace, leaving his men looking on in surprise.
‘We have chosen to elect this man as our guardian.’ Robert’s voice was harsh as he gestured to Wallace. ‘But he is still just the son of a knight.’
‘You dare to challenge his election?’ demanded Adam. Other shouts of scorn and ire joined his.
‘On the contrary,’ answered Robert, ‘I am suggesting that a man of William Wallace’s achievements, a man who is to be sole guardian of Scotland, bears a title befitting his prowess.’ He faced the crowd. ‘I, Sir Robert Bruce, Earl of Carrick, offer William Wallace the honour of a knighthood.’ He turned to Wallace. ‘If he will bend before me.”
― Robyn Young, Insurrection

“Affraig’s eyes moved to the oak tree that towered above her, its branches like antlers against the white sky. Her gaze travelled up to the weathered web that hung from one of the higher boughs, the slender noose swinging inside. In her mind she saw herself weaving it while she chanted words against Malachy’s wrathful curse. She remembered the lord’s hand settling on her shoulder, the hiss of the fire,
his breath on her neck and, outside, stars falling like fiery rain. Her gaze moved west towards Turnberry.
Her memory clouded with thoughts of the earl, but as she thought of his son her mind cleared. The stars had been falling too on the night he was born. She remembered seeing Mars, full and red, a bloody eye winking in the black.”
― Robyn Young, Insurrection

“Robert held back in the press, letting others go after the rebels fleeing before the charge. Their orders were to slaughter anyone found in the streets to provoke a quick surrender, after which mercy would be granted to those left alive. He had seen death throughout his life, but the duel he’d had with Guy was the closest he’d come to ending someone’s life and even then there had been rules imposed. There were no such boundaries here. The freedom to kill was a dizzying, precipitous feeling. But the veteran knights were pushing in behind him, forcing the issue. With a snarl of frustration at his own hesitation, Robert fixed on one man darting away down an alley and spurred his horse out of the crush in pursuit.”
― Robyn Young, Insurrection

“Robert rode beneath the banner of Carrick, the dragon shield on his left arm. He wore it proudly now in common cause; this symbol of Arthur, the warrior king. As he caught sight of Humphrey, the knight raised his fist in a defiant gesture that Robert returned. Today, God willing, they would finish this campaign. He wanted to return home blooded, to be able to tell his grandfather that he too had won his spurs in the king’s war. Nerves and anticipation battled within him, his breaths coming hard and fast in the tight encasement of his helm.”
― Robyn Young, Insurrection

“Across the hillside, above the chaos of Montfort’s left flank, a scarlet banner was raised by Edward’s men, the dragon at its centre a terror wreathed in golden flames, a sign that there was to be no mercy. The noblemen who survived the battle would be taken prisoner and ransomed, but no such chivalry awaited the foot soldiers beyond.”
― Robyn Young, Insurrection

“There is a time for faith, Bishop, and a time for action. It would be a foolish man who stood on a battlefield and faced an army with a Bible in his hands. We are here to do the bidding of our Lord Almighty, but it is through deeds, as well as piety, that we serve Him.”
― Robyn Young, Crusade

“The unhorsing, wounding and capture of the enemy was sought, for corpses fetched little ransom, but in the blind chaos of the charge, death was a whore who did not care who she drew into her darkness, veteran knight or callow bachelor.”
― Robyn Young, Insurrection

“The Red Comyns had always done well behind the throne. The king was but an instrument, as his father used to say. They were the musicians.”
― Robyn Young, Insurrection

10 quotes by Robyn Young there you go! It’s never an easy task picking the best quotations from great writers, so please if you disagree or have more to add, please comment and share your opinions. My 10 greatest Robyn Young quotes will likely be different from yours; however, that’s the best thing about them, each quote can mean something different to each person. So don’t wait, comment and shares your best Robyn Young Quote.

“Edward shifted from one foot to the other, then headed to one of the younger knights from Carrick, leading his horse and their father’s white mare. ‘Sir Duncan, will you hold the horses?’ ‘That’s your task, Master Edward,’ chided the knight.
John de Warenne had ascended the platform beside Bishop Bek and was addressing the assembly. There were more men than benches and those who hadn’t found a place had crowded in behind. Robert could no longer see his father and grandfather. He glanced round as Edward spoke again.
‘Please, Duncan.’ ‘Why?’ Edward paused. ‘If you do, I won’t tell my father you once tried to kiss Isabel.’ The knight laughed. ‘Your sister? I’ve never even spoken to her.’ ‘My father doesn’t know that.’ ‘You’re jesting,’ said the knight, but his smile had disappeared. Edward didn’t respond. The young knight’s face tightened, but he held out his hand to take the reins. ‘Wherever you’re going, you had better be back here before the earl.”― Robyn Young, Insurrection