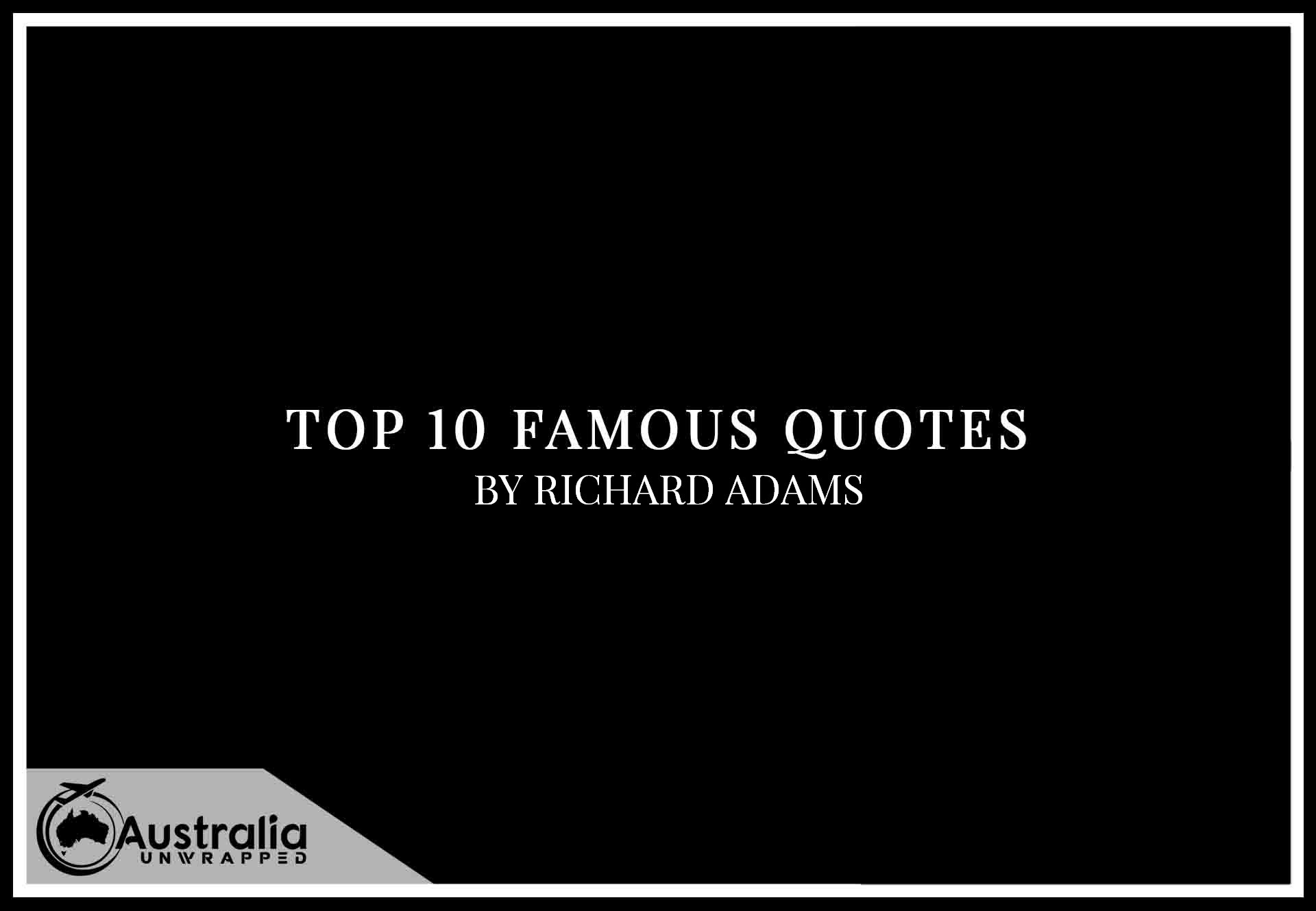 Richard Adams, a writer whom I am guessing you love? Here are our 10 best  Richard Adams quotes for you to enjoy. At Australia Unwrapped we believe every book has at least one quotable line, and our mission is to find them all. Here you will find  Richard Adams’s top 10 popular and famous quotes. Like every good writer  Richard Adams made a number of memorable quotes, here are some of our favorites:

Adams was born in Berkshire, in Newbury. Between 1933 and 1938, he attended Bradfield College. He went up to Worcester College, Oxford, to study modern history in 1938. As of 3 September 1939, the United Kingdom was at war with Germany. In 1940, Adams enlisted in the British Army, where he served until 1946. He received a class B discharge, allowing him to return to Worcester to finish his studies for two more years (1946-48). He received his Bachelor of Arts degree in 1948 and his Master of Arts degree in 1953.

More from the Author: https://amzn.to/3xNy2yu

“All the world will be your enemy, Prince with a Thousand Enemies, and whenever they catch you, they will kill you. But first they must catch you, digger, listener, runner, prince with the swift warning. Be cunning and full of tricks and your people shall never be destroyed.”
― Richard Adams, Watership Down

“There’s terrible evil in the world.”

It comes from men,” said Holly. “All other elil do what they have to do and Frith moves them as he moves us. They live on the earth and they need food. Men will never rest till they’ve spoiled the earth and destroyed the animals.”
― Richard Adams, Watership Down

“Animals don’t behave like men,’ he said. ‘If they have to fight, they fight; and if they have to kill they kill. But they don’t sit down and set their wits to work to devise ways of spoiling other creatures’ lives and hurting them. They have dignity and animality.”
― Richard Adams, Watership Down

“You know how you let yourself think that everything will be all right if you can only get to a certain place or do a certain thing. But when you get there you find it’s not that simple.”
― Richard Adams, Watership Down

“My Chief Rabbit has told me to stay and defend this run, and until he says otherwise, I shall stay here. –Bigwig”
― Richard Adams, Watership Down

“Many human beings say that they enjoy the winter, but what they really enjoy is feeling proof against it.”
― Richard Adams, Watership Down

“My heart has joined the Thousand, for my friend stopped running today.”
― Richard Adams, Watership Down

“He fought because he actually felt safer fighting than running.”
― Richard Adams, Watership Down

“A thing can be true and still be desperate folly, Hazel.”
― Richard Adams, Watership Down

Quotes for all, here you found our selection of 10  Richard Adams quotes. Make sure you help by commenting your best  Richard Adams quote below and sharing our favourite authors so we can look them up, read some of their works and give you the best quotes we can find. We hope you enjoyed our top 10 quotes by  Richard Adams. However, feel free to comment below if you disagree or would like to include some other great and memorable  Richard Adams quotes in our list.

“The full moon, well risen in a cloudless eastern sky, covered the high solitude with its light. We are not conscious of daylight as that which displaces darkness. Daylight, even when the sun is clear of clouds, seems to us simply the natural condition of the earth and air. When we think of the downs, we think of the downs in daylight, as with think of a rabbit with its fur on. Stubbs may have envisaged the skeleton inside the horse, but most of us do not: and we do not usually envisage the downs without daylight, even though the light is not a part of the down itself as the hide is part of the horse itself. We take daylight for granted. But moonlight is another matter. It is inconstant. The full moon wanes and returns again. Clouds may obscure it to an extent to which they cannot obscure daylight. Water is necessary to us, but a waterfall is not. Where it is to be found it is something extra, a beautiful ornament. We need daylight and to that extent it us utilitarian, but moonlight we do not need. When it comes, it serves no necessity. It transforms. It falls upon the banks and the grass, separating one long blade from another; turning a drift of brown, frosted leaves from a single heap to innumerable flashing fragments; or glimmering lengthways along wet twigs as though light itself were ductile. Its long beams pour, white and sharp, between the trunks of trees, their clarity fading as they recede into the powdery, misty distance of beech woods at night. In moonlight, two acres of coarse bent grass, undulant and ankle deep, tumbled and rough as a horse’s mane, appear like a bay of waves, all shadowy troughs and hollows. The growth is so thick and matted that event the wind does not move it, but it is the moonlight that seems to confer stillness upon it. We do not take moonlight for granted. It is like snow, or like the dew on a July morning. It does not reveal but changes what it covers. And its low intensity—so much lower than that of daylight—makes us conscious that it is something added to the down, to give it, for only a little time, a singular and marvelous quality that we should admire while we can, for soon it will be gone again.”― Richard Adams, Watership Down

More from the Author: https://amzn.to/3xNy2yu

Stay Connected
46,516FansLike
5,663FollowersFollow
840FollowersFollow
Previous articleInstilling Social Consciousness Is A Priority For Australian Parents
Next articleStudying in a Non-English speaking Country–The Do’s and the Don’ts