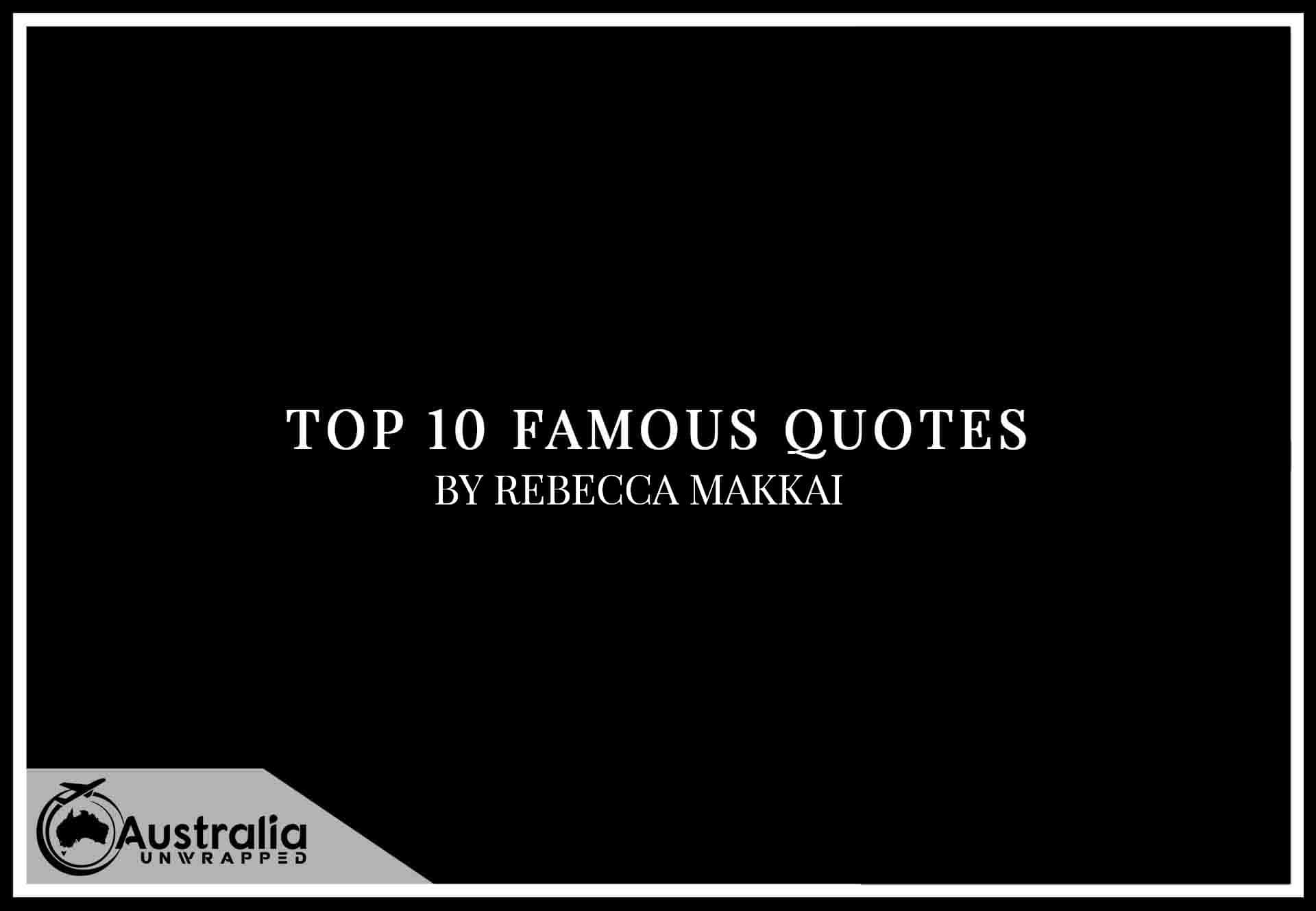 Rebecca Makkai, a writer whom I am guessing you love? Here are our 10 best  Rebecca Makkai quotes for you to enjoy. At Australia Unwrapped we believe every book has at least one quotable line, and our mission is to find them all. Here you will find  Rebecca Makkai’s top 10 popular and famous quotes. Like every good writer  Rebecca Makkai made a number of memorable quotes, here are some of our favorites:

She was a finalist for both the Pulitzer Prize and the National Book Award; she won the ALA Carnegie Medal, the Stonewall Book Award, and the LA Times Book Prize; and she was named one of the New York Times’ Ten Best Books of 2018. Her other books include the novels THE BORROWER and THE HUNDRED-YEAR HOUSE, as well as the collection MUSIC FOR WARTIME, four of which were published in THE BEST AMERICAN SHORT STORIES. Her next novel, NINETY-FIVE, will be published by Viking in 2022 or early 2023.

More from the Author: https://amzn.to/3QeEI01

“I might be the villain of this story.”
― Rebecca Makkai, The Borrower

“But when someone’s gone and you’re the primary keeper of his memory—letting go would be a kind of murder, wouldn’t it? I had so much love for him, even if it was a complicated love, and where is all that love supposed to go? He was gone, so it couldn’t change, it couldn’t turn to indifference. I was stuck with all that love.”
― Rebecca Makkai, The Great Believers

“If we could just be on earth at the same place and same time as everyone we loved, if we could be born together and die together, it would be so simple. And it’s not. But listen: You two are on the planet at the same time. You’re in the same place now. That’s a miracle. I just want to say that.”
― Rebecca Makkai, The Great Believers

“And was friendship that different in the end from love? You took the possibility of sex out of it, and it was all about the moment anyway. Being here, right now, in someone’s life. Making room for someone in yours.”
― Rebecca Makkai, The Great Believers

“And second, everyone is so weird, but they’re all completely accepted. It’s like, okay, you have a pumpkin head, and that guy’s made of tin, and you’re a talking chicken, but what the hell, let’s do a road trip.”
― Rebecca Makkai, The Borrower

“Stupid men and their stupid violence. Tearing apart everything good that was ever built. Why couldn’t you ever just go after your life without tripping over some idiot’s dick?”
― Rebecca Makkai, The Great Believers

“It’s always a matter, isn’t it, of waiting for the world to come unraveled? When things hold together, it’s always only temporary.”
― Rebecca Makkai, The Great Believers

“Like a good American, I wanted to sue somebody. But like a good librarian, I just sat at my desk and waited.”
― Rebecca Makkai, The Borrower

“You’ll never know anyone’s marriage but your own. And even then, you’ll only know half of it.”
― Rebecca Makkai, The Great Believers

“I believed that books might save him because I knew they had so far, and because I knew the people books had saved. They were college professors and actors and scientists and poets. They got to college and sat on dorm floors drinking coffee, amazed they’d finally found their soul mates. They always dressed a little out of season. Their names were enshrined on the pink cards in the pockets of all the forgotten hardbacks in every library basement in America. If the librarians were lazy enough or nostalgic enough or smart enough, those names would stay there forever.”― Rebecca Makkai, The Borrower

More from the Author: https://amzn.to/3QeEI01

15 Best Quotes About Beauty In Life