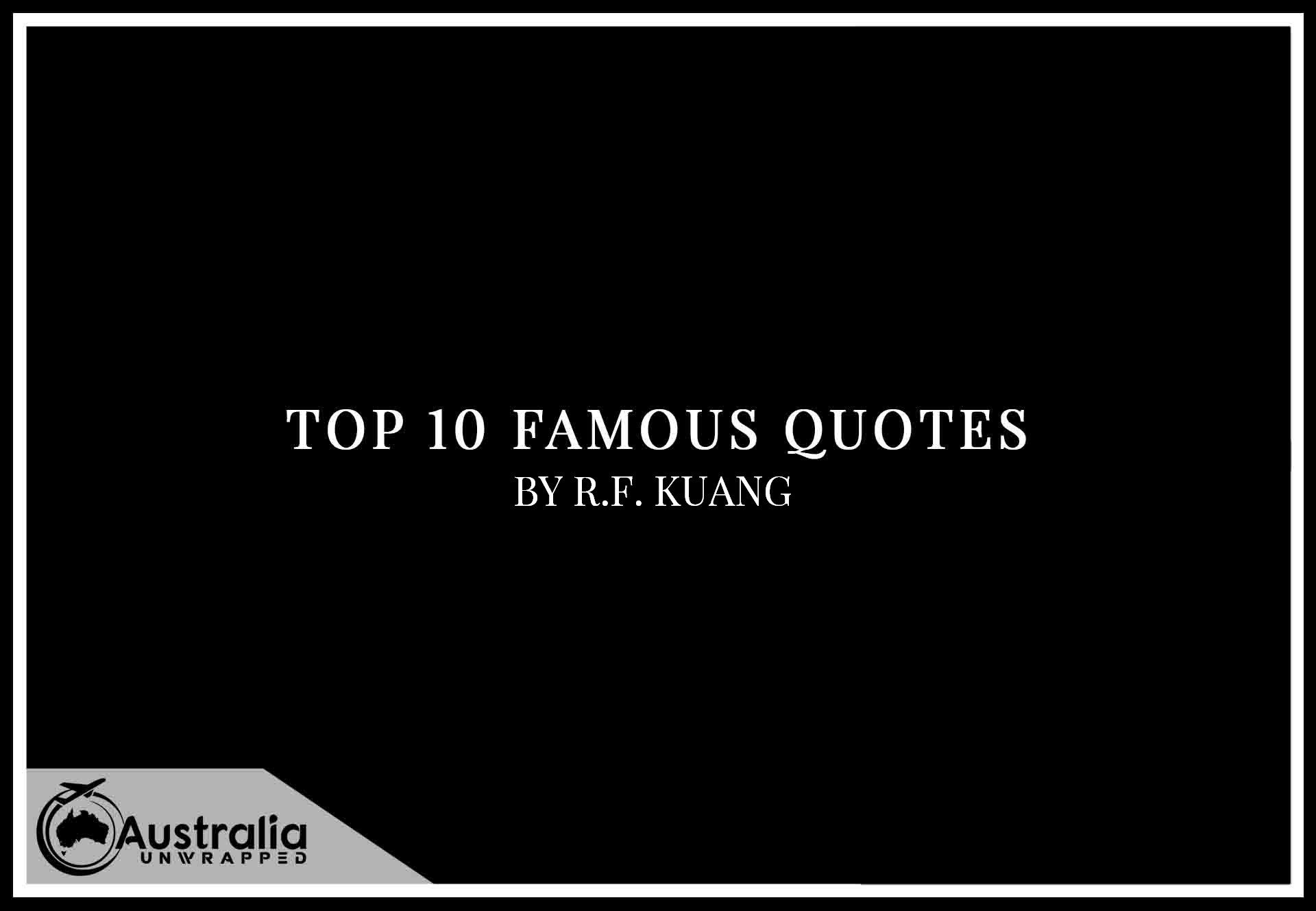 Love reading? Then it’s likely you will love a good quote from your favourite author. This article covers R.F. Kuang’s Top 10 Popular and Famous Quotes that we at Australia Unwrapped have collected from some of his greatest works. R.F. Kuang quotes to remember and here you will find 10 of the best. A memorable quote can stay with you and can be used along your journey. Choosing R.F. Kuang’s top 10 quotes is not easy, but here they are:

“Children ceased to be children when you put a sword in their hands. When you taught them to fight a war, then you armed them and put them on the front lines, they were not children anymore. They were soldiers.”
― R.F. Kuang, The Poppy War

“If there is a divine creator, some ultimate moral authority, then why do bad things happen to good people? And why would this deity create people at all, since people are such imperfect beings?”
― R.F. Kuang, The Poppy War

“Well, fuck the heavenly order of things. If getting married to a gross old man was her preordained role on this earth, then Rin was determined to rewrite it.”
― R.F. Kuang, The Poppy War

“Great danger is always associated with great power. The difference between the great and the mediocre is that the great are willing to take the risk.”
― R.F. Kuang, The Poppy War

“They were monsters!” Rin shrieked. “They were not human!”

“Have you ever considered” he said slowly “that that was exactly what they though of us?”
― R.F. Kuang, The Poppy War

“Fire and water looked so lovely together. It was a pity they destroyed each other by nature.”
― R.F. Kuang, The Dragon Republic

“We aren’t here to be sophisticated. We’re here to fuck people up.”
― R.F. Kuang, The Poppy War

10 quotes by R.F. Kuang there you go! It’s never an easy task picking the best quotations from great writers, so please if you disagree or have more to add, please comment and share your opinions. My 10 greatest R.F. Kuang quotes will likely be different from yours; however, that’s the best thing about them, each quote can mean something different to each person. So don’t wait, comment and shares your best R.F. Kuang Quote.

“Jiang was wrong. She was not dabbling in forces she could not control, for the gods were not dangerous. The gods had no power at all, except what she gave them. The gods could affect the universe only through humans like her. Her destiny had not been written in the stars, or in the registers of the Pantheon. She had made her choices fully and autonomously. And though she called upon the gods to aid her in battle, they were her tools from beginning to end. She was no victim of destiny. She was the last Speerly, commander of the Cike, and a shaman who called the gods to do her bidding. And she would call the gods to do such terrible things.”― R.F. Kuang, The Poppy War