R. A. Spratt: Author Bio About and Best Quotes 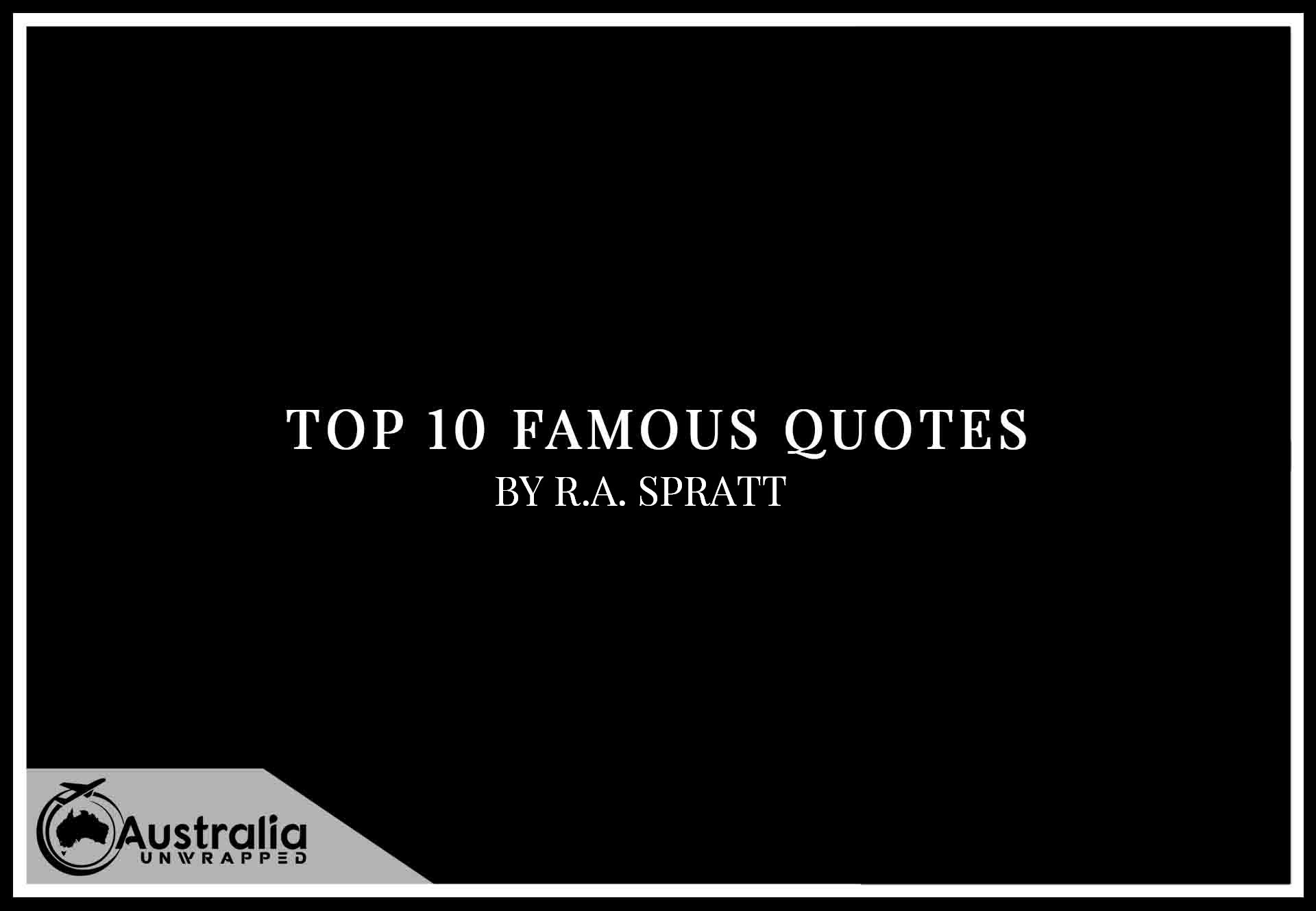 Ten of My Favorite R. A. Spratt Quotes

R. A. Spratt, a writer whom I am guessing you love? Here are our 10 best  R. A. Spratt quotes for you to enjoy. At Australia Unwrapped we believe every book has at least one quotable line, and our mission is to find them all. Here you will find  R. A. Spratt’s top 10 popular and famous quotes. Like every good writer  R. A. Spratt made a number of memorable quotes, here are some of our favorites:

About R. A. Spratt

Author R.A.Spratt is known for her Friday Barnes, Girl Detective, Nanny Piggins, and Peski Kids series of books. Additionally, she has an international hit podcast called ‘Bedtime Stories with R.A. Spratt’. She lives with her family in Bowral, Australia.

“Oh yes,” said Nanny Piggins. “I can regale people with anecdotes from my sordid past and think at the same time.”
― R.A. Spratt, The Adventures of Nanny Piggins

“Yes, I know, because schools are cruel, illogical, and unfair. But the thing is, life is cruel, illogical, and unfair. That is why the education system works so well. If schools and teachers did a good job and inspired children and made them enthusiastic about every subject, they would only be sadly disappointed when they got out into the real world. Better to disappoint them when they’re young. It is more important to learn to cope with disappointment than learn how to do long division.” – Nanny Piggins”
― R. A. Spratt, Nanny Piggins and the Wicked Plan

“I think Binky has latched onto you because your emotional level is equal to his intellectual level.” said Melanie.
Friday frowned. “I’m not sure that is a compliment.
“Yes, it is.” said Ian. “She’s saying that between you, you and Binky make a well-rounded six-year-old.”
“Thanks, Ian,” said Binky with a watery smile, “I don’t understand half the things you say, but I’m glad to have a friend like you.”
― R.A. Spratt, Never Fear

“Do they ever ask pirates to come and speak to you at your school’s career day?’
No,’ admitted Derek. ‘They usually just have accountants come and tell us how accountancy is really exciting.’
They let people come and lie to you?’ asked Nanny Piggins. ‘Your headmaster is a very immoral man.”
― R. A. Spratt, Nanny Piggins and the Wicked Plan

“Nanny Piggins lost the Vegetable Peeling, Gutter Cleaning, and Long Division Explaining tests as well. She got caught telling Michael, ‘Don’t bother to learn that. Long division is a waste of brain space, when you can just buy a calculator.’ Which is only the truth.”
― R. A. Spratt, The Adventures of Nanny Piggins

“Samantha, what have I told you?’ demanded Mr. Green.

That I should be seen, and not heard, until I turn eighteen. When I can say ‘Good-bye, I’m returning my key’ before moving out of home.’ chanted Samantha.”
― R. A. Spratt, The Adventures of Nanny Piggins

“Derrick, Samantha, and Michael were all very good at avoiding being murdered. Nanny Piggins considered this to be one of the most important life skills.”
― R. A. Spratt, The Adventures of Nanny Piggins

“She crept around the house listening for breathing, chocolate eating, breaking porcelain, or any of the other peculiar little noises children make.”
― R. A. Spratt, The Adventures of Nanny Piggins

Quotes for all, here you found our selection of 10  R. A. Spratt quotes. Make sure you help by commenting your best  R. A. Spratt quote below and sharing our favourite authors so we can look them up, read some of their works and give you the best quotes we can find. We hope you enjoyed our top 10 quotes by  R. A. Spratt. However, feel free to comment below if you disagree or would like to include some other great and memorable  R. A. Spratt quotes in our list.

“Running is a deeply unpleasant sport at the best of times, but it is particularly awful when you’re bad at it. There is so much unpleasantness at once. First, there is the shortness of breath, then the ache in the legs, then the sharp pain of the stitch, the soreness of the feet, the discomfort of the joints, and the lactic acid burn in the thighs. Eventually, some of this subsides with the increase of dizziness, delirium and sweating. Then there are the added difficulties of cross-country running – scraping through prickly bushes, standing on sharp rocks, getting jabbed by sticks and wading through icy cold streams. Altogether, it was Friday’s idea of hell.”― R.A. Spratt, No Rules

Ethereum remains on its dominant streak

Is Euro Coin all you need?

Emirates to launch NFTs in the Metaverse