Queen Elizabeth II Is a Badass! 10 Reasons Why 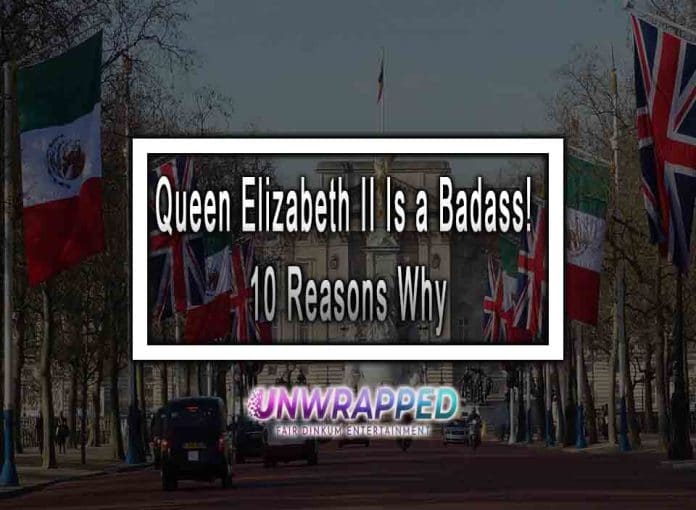 10 Reasons Why Queen Elizabeth II Is a Badass!

If you ever find yourself in a pickle, you’ll want the Queen on your side because she’s tougher than the gems in her numerous tiaras. We look at 10 reasons why the country’s longest-reigning queen is a kickass boss as she turns 95.

Queen Victoria may be ancient, but she’s a badass in her own right. We’re looking at badass and intriguing moments in Queen Elizabeth II’s life for this list.

Did you know she preserved the name of her house? She’s the first queen to send an email, she photographed two field hockey players, she “skydived” at the Olympics, and she chauffeured Saudi King Salman?!

The words “the Queen” almost likely bring up one world-famous monarch: Queen Elizabeth II of the United Kingdom, regardless of where you reside (and Canada, Australia, and so on). She is the grandmother to the ever-popular youthful Royal generation, Princes William and Harry, in addition to being the longest-reigning and oldest living British monarch (whose recent engagement to Suits actress Meghan Markle recently took the world by storm). But Queen Elizabeth, or Lilibet as her family refers to her, isn’t all tea and crumpets and “my-husband-and-I”s.

Her age and long reign aren’t the only things she’s done in her 95 years on this planet. Her Majesty has accomplished some impressive feats, established some progressive precedents, and delivered some amusing quips. She’s gone from giving the first broadcast Christmas address to giving the first live-streamed Christmas speech during her reign, and she’s done it all with dignity and a dash of irony. While she may not be as youthful and sprightly as the Lilibet we see on Netflix (played, of course, by Claire Foy), she’s still pretty darn great. Here are Her Majesty’s ten most badass moments, without further ado.

Stay Connected
52,632FansLike
5,671FollowersFollow
829FollowersFollow
Previous article10 Most Deadliest Animals in the World
Next articleWeird Things We Can Only Find At The Bottom Of The Ocean