Presale Tickets For The Good Things Festival Is Chaotic. 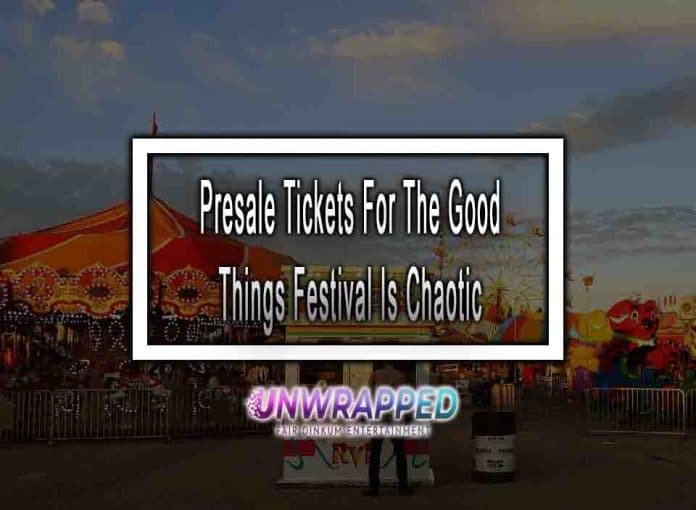 The Presale Snarl-Up This Morning Has Been Handled By Good Things Festival And Oztix, Who Blame “Technical Issues” On “Exceptional Demand.”

Fans wreaked havoc on the Good Things Festival’s ticketing system this morning to get their hands on presale tickets.

This morning at 10:00AM, presale tickets went on sale. As fans rushed the Oztix system to buy tickets, it created many processing problems. This afternoon, Oztix issued a statement via the Good Things Festival social media platforms. According to the statement, there was “record demand for tickets to the Good Things Festival 2022” this morning. There were some technological issues, even though this is fascinating in many respects.

“The ticketing system functioned as expected. However, the processing of payments saw major delays in response time between the system, payment gateway, banks and back. This delay in receiving a confirmation from the bank meant that some customers had multiple attempts at buying tickets and were charged multiple times.”

Fans soon began to protest, however, that the ticketing service Oztix had collected their money but collapsed before it could confirm the purchase of tickets. Numerous upset individuals quickly voiced their displeasure over the technical issue, many of whom were upset over being paid up to seven times for tickets they weren’t even sure they had purchased. One irate client said they had been scammed out of about $3,000 in one instance.

On Tuesday afternoon, the business responded to consumer concerns on Facebook and assured irate Oztix users that they would receive a refund for any duplicate tickets they had purchased due to the blunder.

Oztix assured consumers who had been charged that their tickets would finally be provided. Given how frequently the word “unprecedented” was used during the Covid epidemic, many people stated they were offended by the company’s use. However, some thought its website collapsing was unacceptable. Some people were more understanding and appreciated the company’s justification and efforts to fix the issue.

National Geographic will air a spin-off of “Gordon Ramsay: Uncharted.”