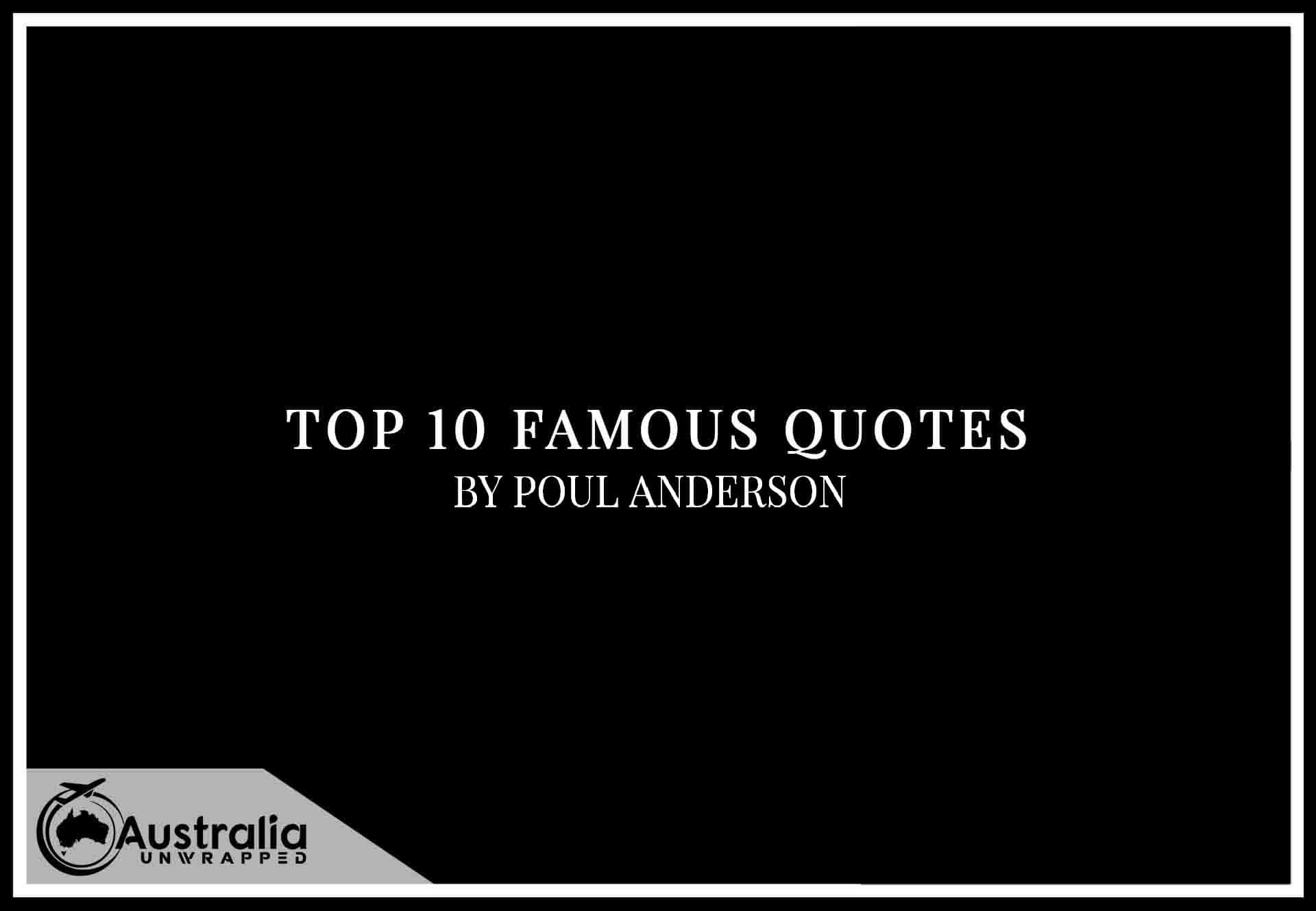 Quotes, who doesn’t love a good quote? This series of articles we look at Top 10 Famous Quotes by Author Poul Anderson, author quotes are always a challenge and fun to pick, with Poul Anderson you will find my Ten favorites of Poul Anderson’s quotes.

Poul William Anderson was an American science fiction author who began his career during one of the genre’s Golden Ages and continued to write until the 21st century. He also authored fantasy novels, historical novels, and a great deal of short fiction. A number of awards were given to him for his writing, including seven Hugo Awards and three Nebula Awards.

In 1948, Anderson graduated from the University of Minnesota with a degree in physics. He married Karen Kruse in 1953. The couple had one daughter, Astrid, who is married to science fiction author Greg Bear. In 1972, Anderson became the sixth president of Science Fiction and Fantasy Writers of America. As a member of the Swordsmen and Sorcerers’ Guild of America, a loose-knit group of Heroic Fantasy authors formed in the 1960s, he contributed to Lin Carter’s Flashing Swords. anthologies. Founder of the Society for Creative Anachronism. In his 1985 novel The Cat Who Walks Through Walls, Robert A. Heinlein dedicated it to Anderson and eight other members of the Citizens’ Advisory Council on National Space Policy.

On July 31, 2001, Poul Anderson died after a month in the hospital due to cancer. Posthumous editions of several of his novels were published.

More from the Author: https://amzn.to/3bccd2T

“Heaven is not as narrowly literal-minded as hell.”
― Poul Anderson, Operation Chaos

“Happier are all men than the dwellers in Faerie – or the gods, for that matter…Better a life like a falling star, bright across the dark, than a deathlessness that can see naught above or beyond itself…the day draws nigh when Faerie shall fade, the Erlking himself shrink to a woodland sprite and then to nothing, and the gods go under. And the worst of it is, I cannot believe it wrong that the immortals will not live forever.”
― Poul Anderson, The Broken Sword

“So much American science fiction is parochial — not as true now as it was years ago, but the assumption is one culture in the future, more or less like ours, and with the same ideals, the same notions of how to do things, just bigger and flashier technology. Well, you know darn well it doesn’t work that way…”
― Poul Anderson

“I think the first duty of all art, including fiction of any kind, is to entertain. That is to say, to hold interest. No matter how worthy the message of something, if it’s dull, you’re just not communicating.

“That,’ he confessed aloud, ‘was as ludicrous a case of mutual ineptitude as the gods of slapstick ever engineered. We both deserve to be tickled to death by small green centipedes. Well… if you keep quiet about it, I will.”
― Poul Anderson, Flandry of Terra

“ninety-nine per cent of the human race, no matter how smart they are, will do the convenient thing instead of the wise thing, and kid themselves into thinking they can somehow escape the consequences.”
― Poul Anderson, Brain Wave

“Two lives met across death and centuries. To ask what it meant is meaningless. There is no destiny. But sometimes there is bravery”
― Poul Anderson, The Stars are Also Fire

“I’ve yet to see any problem, however complicated, which when you looked at it the right way didn’t become still more complicated.”
― Poul Anderson, Call Me Joe

“A fanatic is a man who, when he’s lost sight of his purpose, redoubles his effort.”
― Poul Anderson, Harvest of Stars

“Their flight was not less exhilarating for being explainable.”
― Poul Anderson, Tau Zero

“You simply do not understand the human condition,” said the robot.

Hah! Do you think you do, you conceited hunk of animated tin?”

Yes, I believe so, thanks ot my study of the authors, poets, and critics who devote their lives to the exploration and description of Man. Your Miss Forelle is a noble soul. Ever since I looked upon my first copy of that exquisitely sensitive literary quarterly she edits, I have failed to understand what she sees in you. To be sure,” IZK-99 mused, “the relationship is not unlike that between the nun and the Diesel engine in Regret for Two Doves, but still… At any rate, if Miss Forelle has finally told you to go soak your censored head in expurgated wastes and then put the unprintable thing in an improbable place, I for one heartily approve.

Tunny, who was no mamma’s boy — he had worked his way through college as a whale herder and bossed construction gangs on Mars — was so appalled by the robot’s language that he could only whisper, “She did not. She said nothing of the sort.”

I did not mean it literally,” IZK-99 explained. “I was only quoting the renunciation scene in Gently Come Twilight. By Stichling, you know — almost as sensitive a writer as Brochet.”

More from the Author: https://amzn.to/3bccd2T