Skip to content
You are here:Home / PHP Working with Data Types and Variables

Working with Data types and Variables in PHP

Welcome to another exciting tutorial of PHP. Previously we discussed the Basics of HTML5 on the way to PHP Learning. Now it’s time to jump to something advance. As the title suggests, we will be discussing today the Data types and Variables in PHP. Both of the topics are of real importance while learning any programing language.

Variables are really fun and easy to learn. The whole concept behind this is to save some data temporarily and use it in time of need. In PHP, the syntax of a variable starts with a “$”, followed by the variable name. After that, we assign a value to it using this syntax. A variable name can be anything you want just it cannot start with a digit or a special character. Also, inserting a space in a variable name is not allowed but you can add a ‘_’ instead. Example

So in this particular example, we created a variable name “Var” and it is holding 25 value for us. So, In the future if we need to use this value, we can simply write the variable name and it will do the work.

Try “echo $Var” and see what is being printed. Remember the syntax 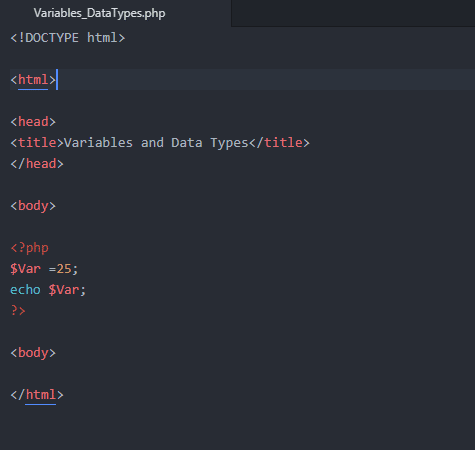 Output must be this web page

While working with variables, we must know what kind of values we can store in a variable. In the previous example, we stored a number but there are many more options we have. Let’s discuss each one in details.

In PHP we have options of Integers, Strings, Floats, Booleans and Arrays as data types. There are some others as well but we will stick to all these in beginning. The fun part is that unlike many other languages, you don’t have to mention the data type when describing a variable.

Integers are used to store the numeric data. All the negative and positive numbers are included in this list. We use this kind of data in all kind of calculations and whenever we need to store or show some numeric values. We have already seen an example of a variable holding a numeric value.

A string is a list of characters combined together. We always make a string in PHP by putting some characters (Text) inside the double quotes “”. The thing to remember is that there can also be integers inside a String as well, but since it is surrounded by a double quote we will handle it as a string and not as an integer. For example $Var = “25”. In this case, the variable is holding a string and not an integer.

Arrays are really important in any programing language. We will be doing a whole tutorial on theses. Right now, all you have to know is that Arrays are the list of different data types. And you can access any entry using an index.

These are the special kind of variables that can only store true values of “true” or “false”. Booleans are really handy while working with the “if-else statements” (Hold on for the Next tutorial to know about these statements).

Since we are now familiar with different data types, let’s use them in a real code example. In a PHP tag write all this code.

When we echo different data types with strings we combine them with a Dot “.” As you can see from the example above. Merging this with HTML will look like 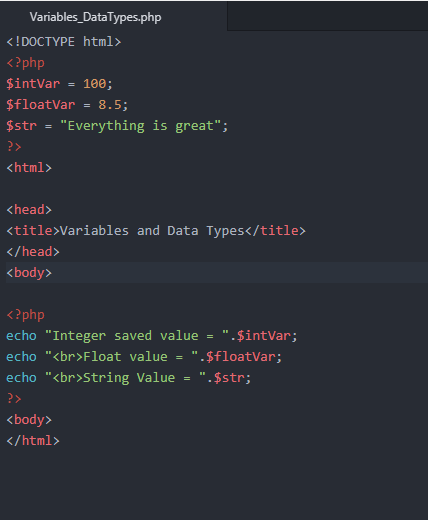 As we discussed the earlier position of PHP code doesn’t matter. You see, I have defined all of the variables in a separate PHP tag which is on the top of all the code. That is completely fine, but what matters is that I put the second part of the code inside the body tag. Because this is where I want to echo all of my outputs. Hence the output will look like:

Updating Value in a Variable

Different techniques are used to update a value in a variable.

So this was another tutorial in the path of your PHP learning. We really appreciate your opinion so please comment. And get ready for the upcoming tutorial which is going to be all about If Else Statements and Arithmetic operations in PHP. It is going to be an exciting experience for you. Good Luck in your journey.

Part One: HOW TO RUN YOUR FIRST PHP SCRIPT ON WINDOWS

Part Two: BASICS OF HTML5 ON THE WAY TO PHP LEARNING

Part Four: IF ELSE STATEMENTS AND ARITHMETIC OPERATIONS IN PHP

Also See : Valuable Antiques You May Have Lying Around Your House

How To Select A Solar Power System For The Home 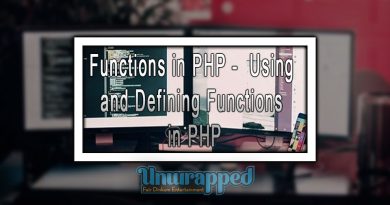