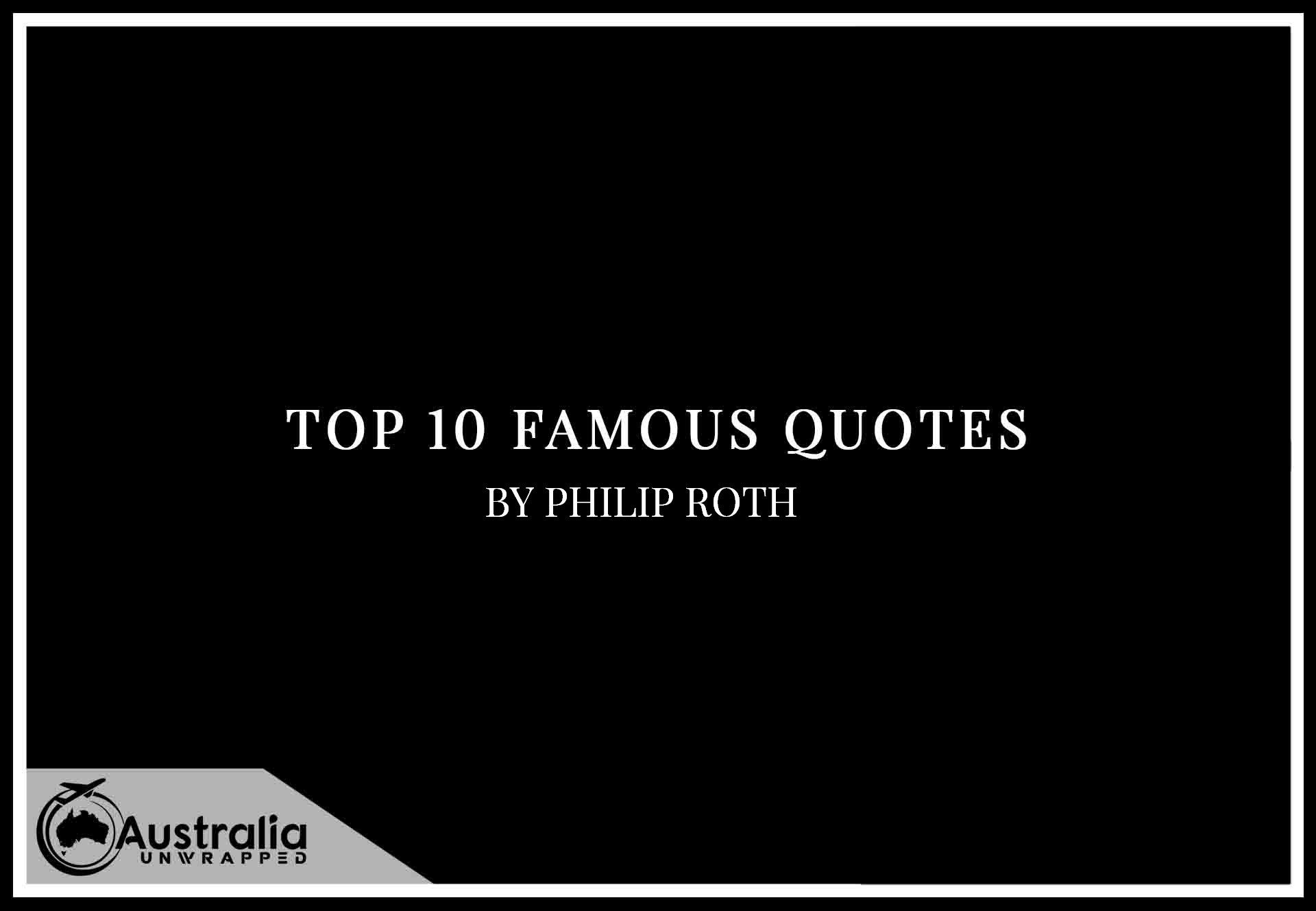 Quotes, who doesn’t love a good quote? This series of articles we look at Top 10 Famous Quotes by Author Philip Roth, author quotes are always a challenge and fun to pick, with Philip Roth you will find my Ten favorites of Philip Roth’s quotes.

Author Philip Milton Roth was an American writer. The 1959 collection Goodbye, Columbus (winner of the 1960 National Book Award) helped launch his literary career, which he cemented with the 1969 bestseller Portnoy’s Complaint. He continues to write critically-acclaimed works, many of which feature his fictional alter ego Nathan Zuckerman. In 1979, Zuckerman published The Ghost Writer, and in 1997, American Pastoral was published (a Pulitzer Prize winner). He won the Man Booker International Prize for lifetime achievement in fiction in May 2011.

More from the Author:  https://amzn.to/3ODQUG6

“The only obsession everyone wants: ‘love.’ People think that in falling in love they make themselves whole? The Platonic union of souls? I think otherwise. I think you’re whole before you begin. And the love fractures you. You’re whole, and then you’re cracked open. ”
― Philip Roth, The Dying Animal

“Literature takes a habit of mind that has disappeared. It requires silence, some form of isolation, and sustained concentration in the presence of an enigmatic thing.”
― Philip Roth

“Because that is when you love somebody – when you see them being game in the face of the worst. Not courageous. Not heroic. Just game.”
― Philip Roth, The Human Stain

“Everybody else is working to change, persuade, tempt and control them. The best readers come to fiction to be free of all that noise.”
― Philip Roth

“The pleasure isn’t in owning the person. The pleasure is this. Having another contender in the room with you.”
― Philip Roth, The Human Stain

“He had learned the worst lesson that life can teach – that it makes no sense.”
― Philip Roth, American Pastoral

“You fight your superficiality, your shallowness, so as to try to come at people without unreal expectations, without an overload of bias or hope or arrogance, as untanklike as you can be, sans cannon and machine guns and steel plating half a foot thick; you come at them unmenacingly on your own ten toes instead of tearing up the turf with your caterpillar treads, take them on with an open mind, as equals, man to man, as we used to say, and yet you never fail to get them wrong. You might as well have the brain of a tank. You get them wrong before you meet them, while you’re anticipating meeting them; you get them wrong while you’re with them; and then you go home to tell somebody else about the meeting and you get them all wrong again. Since the same generally goes for them with you, the whole thing is really a dazzling illusion. … The fact remains that getting people right is not what living is all about anyway. It’s getting them wrong that is living, getting them wrong and wrong and wrong and then, on careful reconsideration, getting them wrong again. That’s how we know we’re alive: we’re wrong. Maybe the best thing would be to forget being right or wrong about people and just go along for the ride. But if you can do that — well, lucky you.”

More from the Author:  https://amzn.to/3ODQUG6