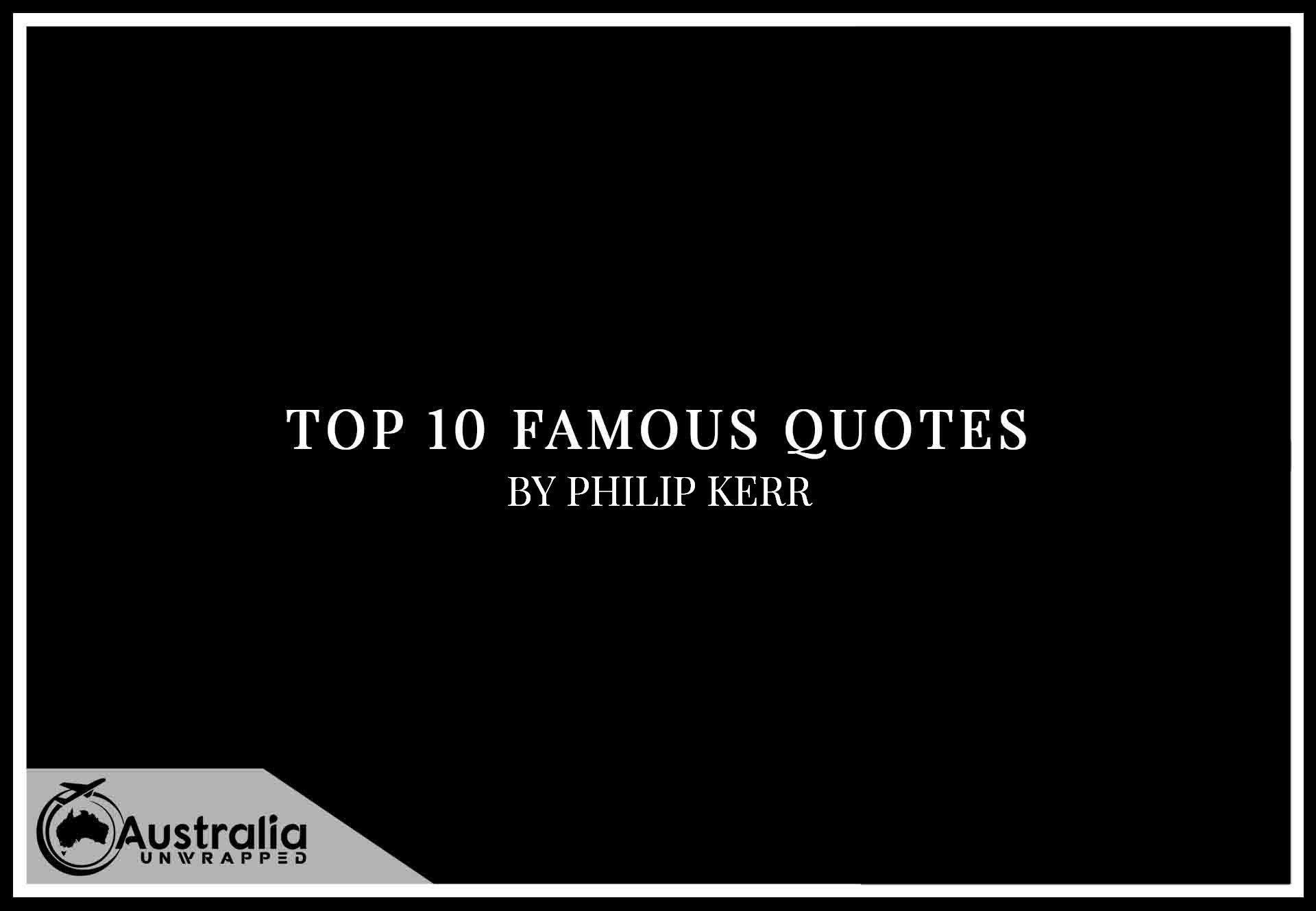 Quotes, who doesn’t love a good quote? This series of articles we look at Top 10 Famous Quotes by Author Philip Kerr, author quotes are always a challenge and fun to pick, with Philip Kerr you will find my Ten favorites of Philip Kerr’s quotes.

For most novelists, the city where the action takes place is just a backdrop or a stage set. The Berlin of Philip Kerr’s fiction is a character, a character as troubled and complex as his private investigator protagonist. ‘When I started writing, I was more interested in the Berliner than in the history of Berlin,’ says Kerr. The Berlin people have always been awkward-squad Germans, which is probably why I admire them. Hitler disliked Berliners, and they have stayed the same since then.

More from the Author: https://amzn.to/3HM8Goe

“Sometimes a stupid man is only a couple of good guesses away from looking clever.”
― Philip Kerr, The Lady from Zagreb

“I made an appointment to see him and then ordered another beer. While I was drinking it I did some doodling on a piece of paper, the algebraic kind that you hope will help you think more clearly. When I finished doing that, I was more confused than ever. Algebra was never my strong subject.”
― Philip Kerr, March Violets

“A man’s bookseller should keep his confidence, like his physician. What can become of a world where every man knows what another man reads? Why, sir, books would become like quacks’ potions, with every mountebank in the newspapers claiming one volume’s superiority over another.”
― Philip Kerr, Dark Matter: The Private Life of Sir Isaac Newton

“The real question here is what happens to you, Gunther. In many ways you’re a useful fellow to have around. Like a bent coat hanger in a toolbox, you’re not something that was ever designed for a specific job, but you do manage to come in useful sometimes.”
― Philip Kerr, Prague Fatale

“I didn’t know you were interested in politics,’ I said. ‘I’m not,’ he said. ‘But isn’t that how Hitler got elected in the first place: too many people who didn’t give a shit who was running the country?”
― Philip Kerr, Berlin Noir: March Violets / The Pale Criminal / A German Requiem

“Looking round the room I found there were so many false eyelashes flapping at me that I was beginning to feel a draught.”
― Philip Kerr, March Violets

“All men come to resemble their fathers. That isn’t a tragedy, but you need a hell of a sense of humour to handle it.”
― Philip Kerr, A Quiet Flame

“On the whole it’s not wise to remind the devil that he’s the devil, especially when we were getting on so well.”
― Philip Kerr, The Lady from Zagreb

“When you get a cat to catch the mice in your kitchen, you can’t expect it to ignore the rats in the cellar.”
― Philip Kerr, March Violets

“it is always the women who rebuild the civilizations that the men have done their best to destroy”
― Philip Kerr, A Man Without Breath

“It was an interesting dilemma and pointed up a real point of difference between Nazism and Communism as forms of government: there was no room for the individual in Soviet Russia; conversely not everything was state-managed in Germany. The Nazis never shot anyone for being stupid, inefficient or just plain unlucky. Generally speaking the Nazis looked for a reason to shoot you, the commies were quite happy to shoot you without any reason at all – but when you’re going to be shot, what’s the difference?”

― Philip Kerr, A Man Without Breath

More from the Author: https://amzn.to/3HM8Goe