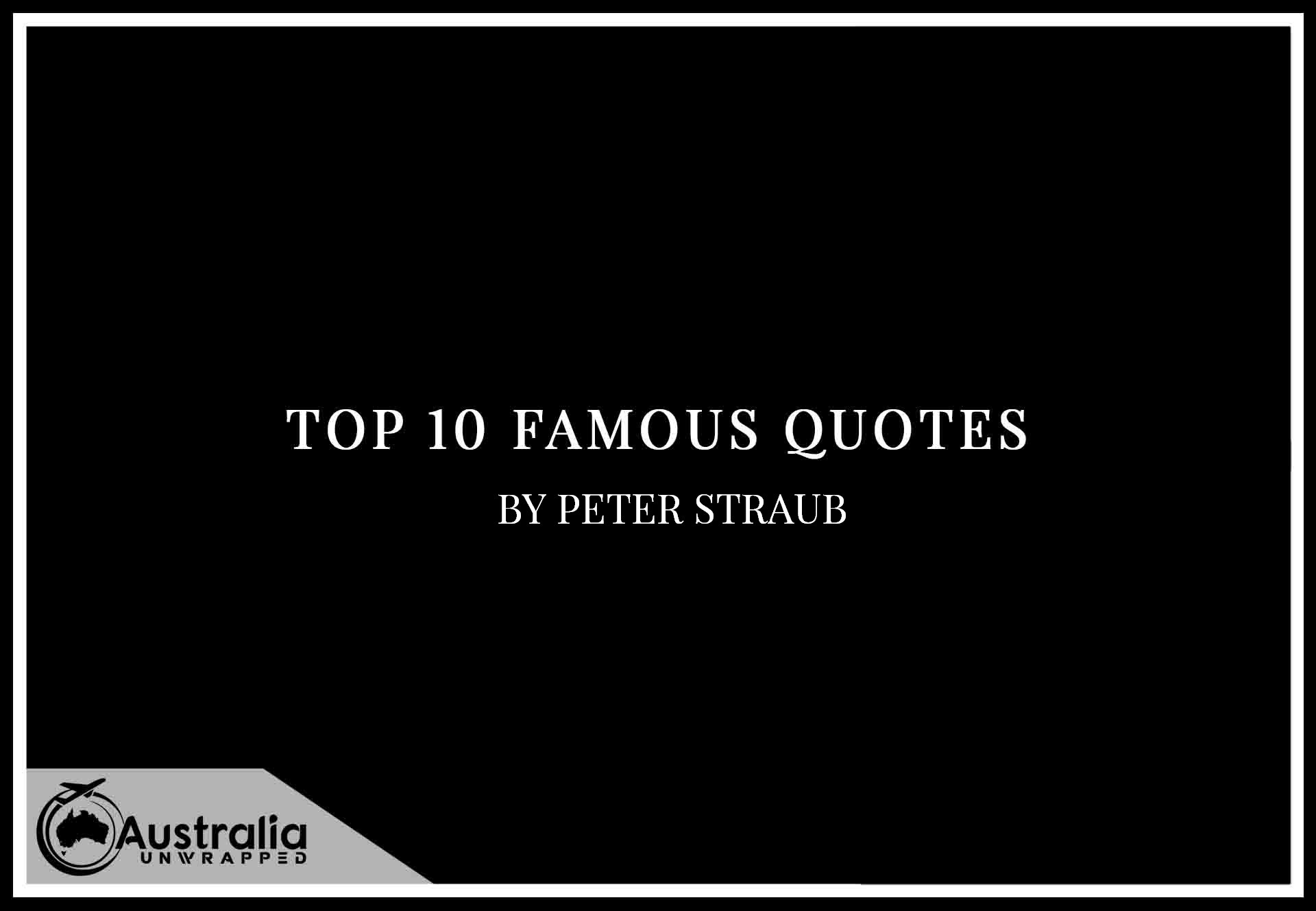 Quotes, who doesn’t love a good quote? This series of articles we look at Top 10 Famous Quotes by Author Peter Straub, author quotes are always a challenge and fun to pick, with Peter Straub you will find my Ten favorites of Peter Straub’s quotes.

Straub was born in Milwaukee, Wisconsin on 2 March, 1943, the first son of a salesman and a nurse. A salesman wanted him to be an athlete, a nurse thought he’d do well as either a doctor or a Lutheran minister, but he just wanted to learn to read.

Having found kindergarten to be a banal exercise in cutting animal shapes out of heavy colored paper, he taught himself to read by memorizing his comic books and reciting them over and over to other neighborhood children on the front steps until he could recognize the words. After finishing first grade and finding everyone else slaving over Dick, Jane, and Spot (“See Spot run. See, see, see”), he ransacked the library, looking for pirates, soldiers, detectives, spies, criminals, and other colorful characters. With time, he earned a reputation as a master storyteller, in high demand around campfires and back yards.

More from the Author: https://amzn.to/3ygbWF4

“To feel our character, our personality, and our personal, hard-won history fade from being is to be exposed to whatever lies beneath these comforting, operational conveniences. What remains when the conscious and functioning self has been erased is mankind’s fundamental condition – irrational, violent, guilt-wracked, despairing, and mad.”
― Peter Straub, American Fantastic Tales: Terror and the Uncanny from Poe to the Pulps

“… He was particularly disgruntled to see what he had taken for a bundle of old rags on the tracks outside was a human body. He did not say “Not again” (what he said was “Shit on this”), but “Not again” was what he meant.”
― Peter Straub, Ghost Story

“…nobody can protect anybody else from vileness. Or from pain. All you can do is not let it break you in half and keep on going until you get to the other side.”
― Peter Straub, Ghost Story

“She thought, instead, with longing of more books—of buying books—of slipping into a narrative of other people’s lives. That was release.”
― Peter Straub, Julia

“You’ll never get anything done if you walk around with an unchipped heart.”
― Peter Straub, Shadowland

“Intellectual labor is a common technique for the avoidance of thinking.”
― Peter Straub, If You Could See Me Now

“The world is full of ghosts, and some of them are still people.”
― Peter Straub, The Throat

“Sometimes it is right to fear the dark.”
― Peter Straub

“It is as though some old part of yourself wakes up in you, terrified, useless in the life you have, its skills and habits destructive but intact, and what is left of the present you, the person you have become, wilts and shrivels in sadness or despair: the person you have become is only a thin shell over this other, more electric and endangered self. The strongest, the least digested parts of your experience can rise up and put you back where you were when they occurred; all the rest of you stands back and weeps.”

More from the Author: https://amzn.to/3ygbWF4