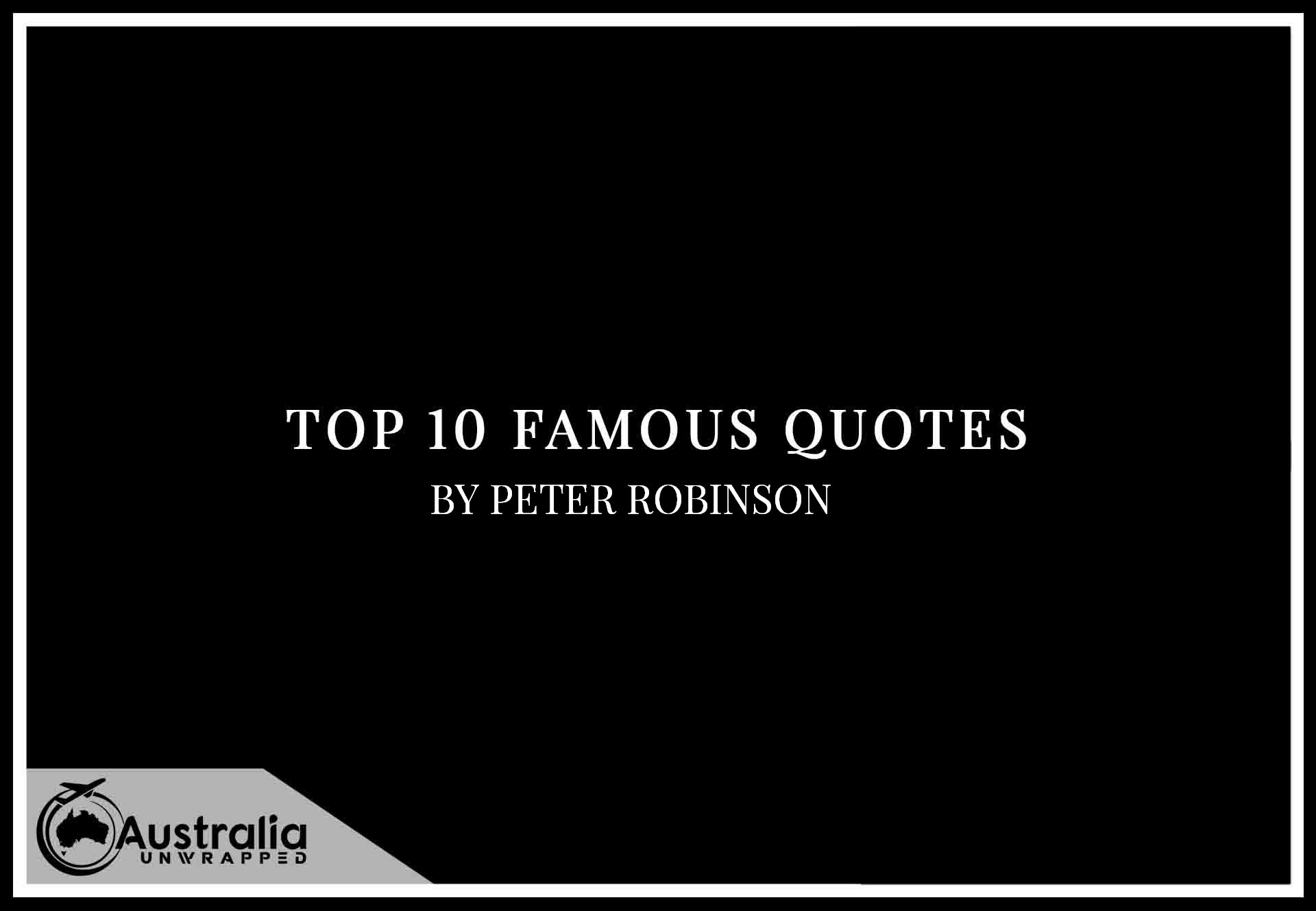 Quotes, who doesn’t love a good quote? This series of articles we look at Top 10 Famous Quotes by Author Peter Robinson, author quotes are always a challenge and fun to pick, with Peter Robinson you will find my Ten favorites of Peter Robinson’s quotes.

More from the Author: https://amzn.to/3ODGYfz

“Paranoia is a form of awareness.”
― Peter Robinson, Bad Boy

“He had been working at the wall for too long. Why he bothered the Lord only knew. After all, it went nowhere and closed in nothing. His grandfather had been a master waller in the dale, but the skill had not been passed down the generations. He supposed he liked is for the same reason he liked fishing: mindless relaxation. In an age of totalitarian utilitarianism, Gristhorpe thought, a man needs as much purposeless activity as he can find.”
― Peter Robinson, Wednesday’s Child

“But would she ever recover fully inside? How would she handle being alone in the house? Would she ever again be able to hear someone walking up the garden path without that twinge of fear and panic? He didn’t know. The psyche regenerates itself, too, sometimes. We’re often a damn sight more resilient than we’d imagine.”
― Peter Robinson

“Banks felt more alone and further away for having just talked to Sophia than he had before her call. But it was always like that – the telephone might bring you together for a few moments, but there’s nothing like it for emphasising distance.”
― Peter Robinson, All the Colours of Darkness

“he realized with a shock that the loss of innocence never stopped happening, that he was still losing it, that it was like a wound that never healed, and he would probably go on losing it, drop by drop, until the day he died.”
― Peter Robinson, Cold Is The Grave

“The only difference was, you could play the music again and again; a life plays only once.”
― Peter Robinson, Before the Poison

“Better by far you should forget and smile / Than that you should remember and be sad.”
― Peter Robinson, Sleeping in the Ground

“They locked her in the cage when she started to bleed.”
― Peter Robinson, Aftermath

“But what Nev does is he takes these kids’ anger and channels it. He gives them someone to hate. He gives their rage some structure and provides them with real targets rather than nebulous ones. So they end up believing they’re committing theft, assault and vandalism for a good cause. Isn’t that what terrorism is basically all about, anyway? Add a few olde worlde patriotic values, a lot of guff about the ‘true English homeland’ and a bit of green to the mix and it makes them feel like downright responsible and virtuous citizens, the only ones who really care about their country.”

― Peter Robinson, Blood At The Root

More from the Author: https://amzn.to/3ODGYfz