Peter May: Author Bio About and Best Quotes 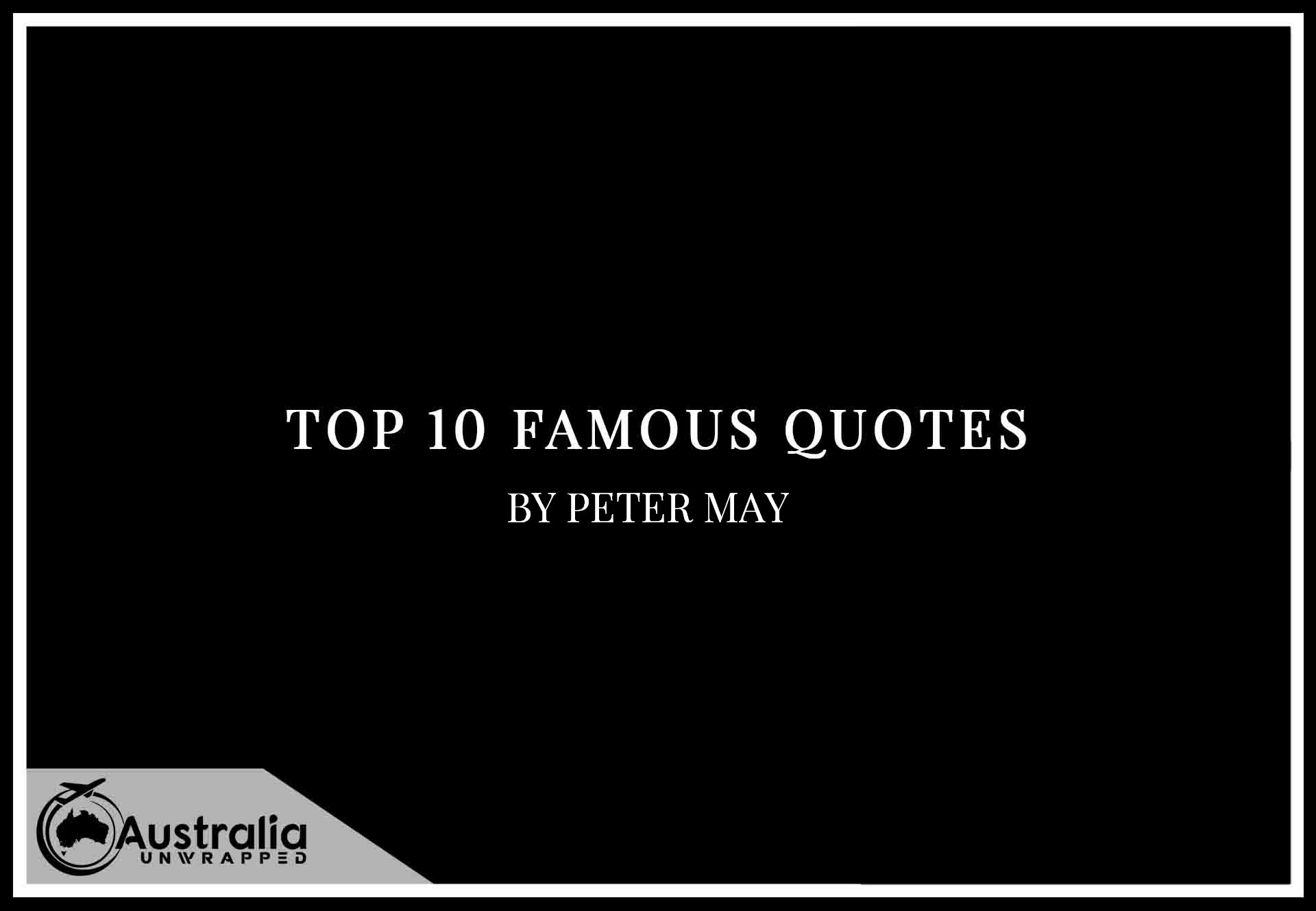 Ten of My Favorite Peter May Quotes

Quotes, who doesn’t love a good quote? This series of articles we look at Top 10 Famous Quotes by Author Peter May, author quotes are always a challenge and fun to pick, with Peter May you will find my Ten favorites of Peter May’s quotes.

Multi-award-winning author Peter May has written:

Writer, producer, and director May had a successful career in television.

Over the course of 15 years, he earned more than 1000 credits as a scriptwriter and script editor on prime-time British television drama. He created three major television drama series and presided over two of the best-rated serials in his country before turning to his first love, novels.

Born and raised in Scotland he lives in France.

His breakthrough as a best-selling author came with The Lewis Trilogy. After being turned down by all the major UK publishers, the first of the The Lewis Trilogy – The Blackhouse – was published in France as L’Ile des Chasseurs d’Oiseaux where it was hailed as “a masterpiece” by the French national newspaper L’Humanité. His novels have a large following in France. The trilogy has won several French literature awards, including one of the world’s largest adjudicated readers awards, the Prix Cezam.

“Now he was learning again how easy it was to be lonely in a crowd.”
― Peter May, The Blackhouse

“It’s odd how people can get locked into a kind of time warp. There’s a time in their lives that defines them, and they hang on to it for all the subsequent decades; the same hair, the same style of clothes, the same music, even though the world around them has changed beyond recognition.”
― Peter May, The Blackhouse

“A light wind blew high clouds across an inky sky, stars like jewels set in ebony. An almost full moon came and went in washes of colourless silver light. The air was filled with the sound of the ocean, the slow steady breath of eternity.”
― Peter May, Entry Island

“When you are young a year is a big part of your life and seems to last for ever. When you are old, there have been too many of them gone before and they pass all too fast. We move so slowly away from birth, and rush so quickly to death.”
― Peter May, The Lewis Man: The Lewis Trilogy

“Life went past you in a flash, like a bus on a rainy night in Ness. You had to be sure it saw you and stopped to let you on, otherwise it was gone without you, and you would be left with a miserable walk home in the wind and the wet.”
― Peter May, The Blackhouse

“The trouble with jealous revenge is that while you might inflict hurt on the other party, it does nothing to lessen the effect of the hurt you are feeling yourself. So everyone ends up unhappy.”
― Peter May, The Blackhouse

“All along the ragged coastline, the sea sucked and frothed and growled, tireless legions of riderless white horses crashing up against the stubborn stone of unyielding black cliffs.”
― Peter May, The Lewis Man: The Lewis Trilogy

“But the one thing Fin had learned from his years in the police was that however much you believed you had them figured out, people invariably surprised you.”
― Peter May, The Blackhouse

“Tri rudan a thig gun iarraidh: an t-eagal, an t-eudach’s an gaol. (Three things that come without asking: fear, love and jealousy.)”
― Peter May, The Blackhouse

“And although I knew nothing of love, I knew that I had found it, and never wanted to lose it.”
― Peter May, Entry Island

10 Famous Quotes by Author Peter May

So there you have it my Ten favorite quotes by Peter May, please comment below and share your favorite quotes by the fantastic author Peter May.  Furthermore, if you find any Authors not covered for there, top 10 quotes let me know and I will review their works and find some of their best quotes as has been done here for Peter May.

One Final Bonus – Peter May Quote

“Knew, too, that it wasn’t just Mona he wanted to run away from. It was everything. Back to a place where life had once seemed simple. A return to childhood, back to the womb. How easy it was now to ignore the fact that he had spent most of his adult life avoiding just that. Easy to forget that as a teenager nothing had seemed more important to him than leaving.”

― Peter May, The Blackhouse