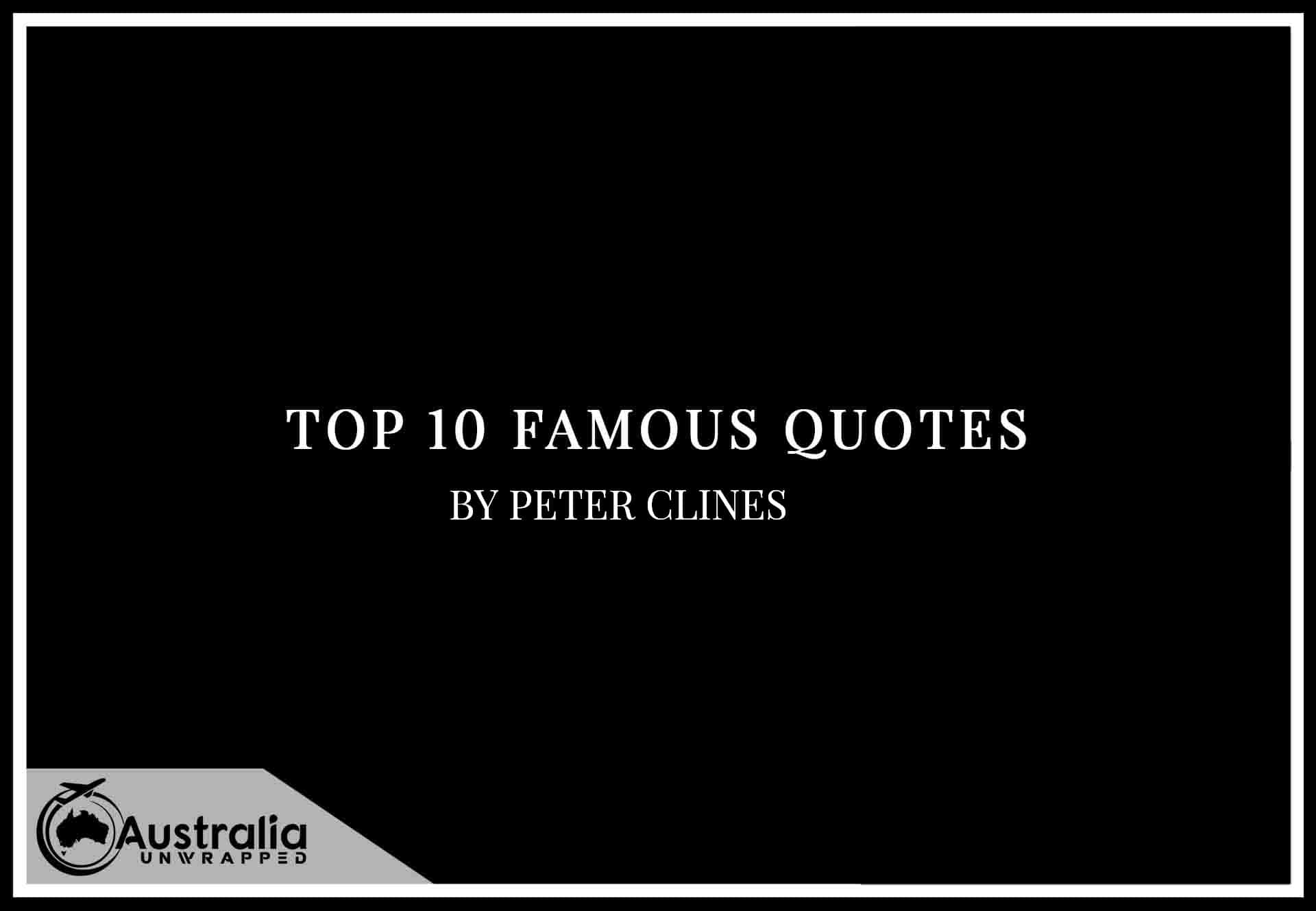 Quotes, who doesn’t love a good quote? This series of articles we look at Top 10 Famous Quotes by Author Peter Clines, author quotes are always a challenge and fun to pick, with Peter Clines you will find my Ten favorites of Peter Clines’s quotes.

As a child, he grew up in the Stephen King fallout zone of Maine and–inspired by comic books, Star Wars, and Saturday morning cartoons–started writing at the age of eight with his first epic novel, Lizard Men From The Center of The Earth.

His first writing sale was to a local newspaper at the age of seventeen, and he completed his quadruple PhD studies in English literature, archaeology, quantum physics, and interpretive dance at the age of nineteen. When he met actress Yvonne Strahvorski on Hawaii’s Keauwaula Beach in 2008, he thought up a way to maintain cold fusion while solving world hunger, but he forgot about it when she offered to buy him a drink. As the inspiration for the epic poem Beowulf as well as the movie Raiders of the Lost Ark, he is single-handedly responsible for repelling the Martian invasion that occurred in Grovers Mills, New Jersey, in 1938. The eleven sonnets he wrote to impress a girl when he was in high school have all been attributed to Shakespeare.

More from the Author: https://amzn.to/3OC0GZg

“In one of the earlier Sherlock Holmes mysteries, Arthur Conan Doyle (not yet a Sir) made an observation on logical deduction. When you have eliminated the impossible, whatever remains, however improbable, must be the truth.

There is, however, a specific flaw in that maxim. It assumes people can recognize the difference between what is impossible and what they believe is impossible.”
― Peter Clines, Ex-Heroes

“Nate had realized a while back that nobody talked with each other at such gatherings. People just took turns talking at each other. He never got the sense anyone was listening.”
― Peter Clines, 14

“Your voice is familiar,” said Barry. “I couldn’t place it and then I realized you sound like the guy in my dreams. Which sounds very different than I intended out loud.”
― Peter Clines, Ex-Purgatory

“People could say a lot of negative things about the apocalypse, but there was no arguing the air quality in Los Angeles had really improved.”
― Peter Clines, Ex-Heroes

“Almost any concept or idea in the world can be expressed through comparison with a classic Warner Bros. cartoon.”
― Peter Clines, The Fold

“Nobody sane loves working in an office, It’s against human nature to be locked up in a cubicle all day long.”
― Peter Clines, 14

“Zombies are like credit card payments. If you keep getting rid of the minimum amount, you’ll never win.”
― Peter Clines, Ex-Heroes

“I took in a deep breath, and smoke twisted around my head as I let it slip through my teeth. “Do you know what my favorite show was when I was a little kid?”

The look again. “I would have no idea.”

“I am familiar with it. Christopher Eccleston, David Tennant, and Matt—“

“No,” I said. “The new show’s great, but I grew up on the old one. The low-budget, rubber monster show with Tom Baker and Peter Davison. I watched it on PBS all the time as a kid.”

I looked out at the dark ruins of Hollywood, at the stumbling shadows dotting the streets as far as you could see. The only other living person within half a mile was standing behind me, her eyes boring into my head.

“The Doctor didn’t have super-powers or weapons or anything like that. He was just a really smart guy who always tried to do the right thing. To help people, no matter what. That struck me when I was a kid. The idea that no matter how cold and callous and heartless the world seemed, there was somebody out there who just wanted to make life better. Not better for worlds or countries in some vague way. Just better for people trying to live their lives, even if they didn’t know about him.”

I turned back to her and tapped my chest. “That’s what this suit’s always been about. Not scaring people like you or Gorgon do. Not some sort of pseudo-sexual roleplay or repressed emotions. I wear this thing, all these bright colors, because I want people to know someone’s trying to make their lives better. I want to give them hope.”

More from the Author: https://amzn.to/3OC0GZg