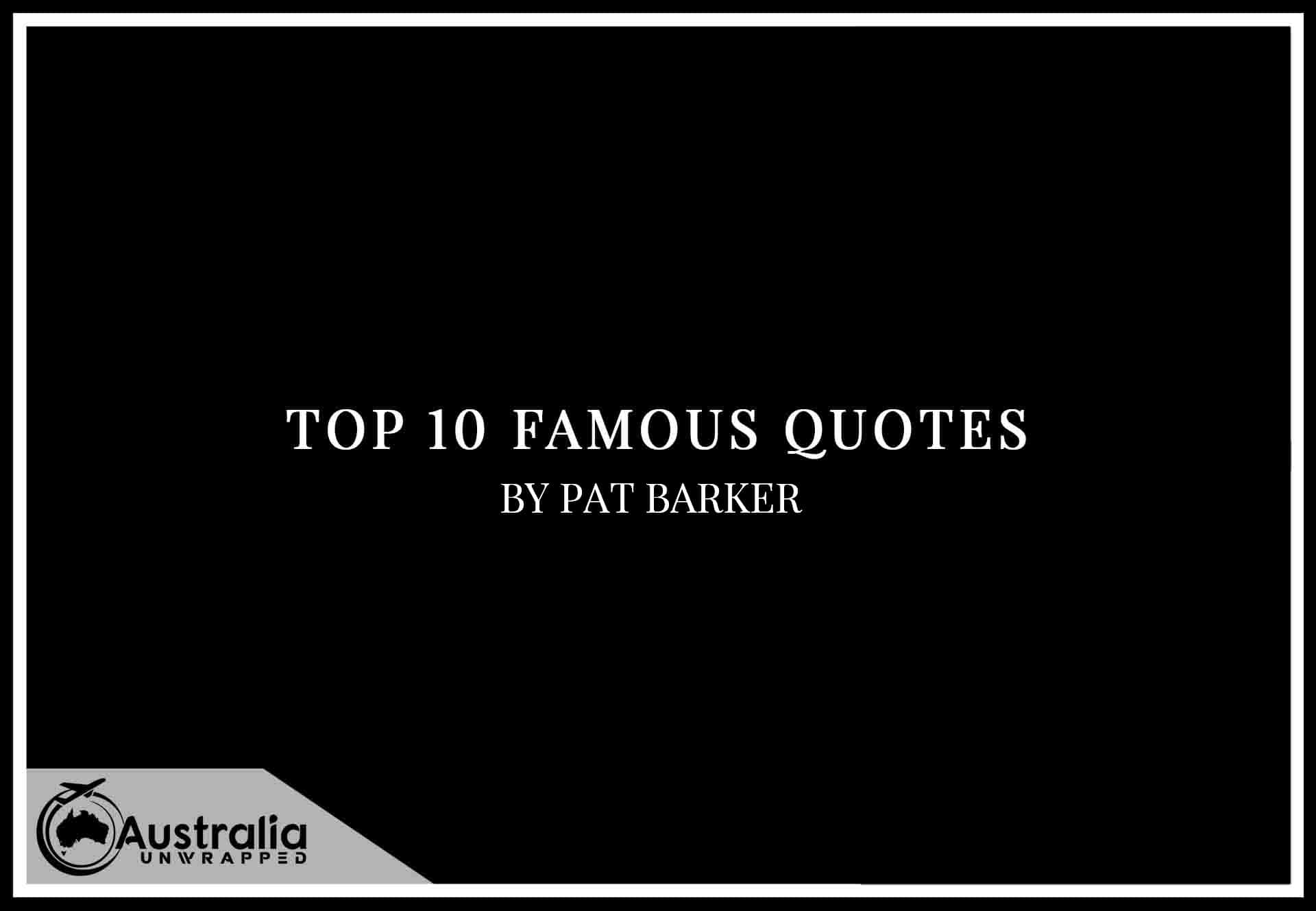 Quotes, who doesn’t love a good quote? This series of articles we look at Top 10 Famous Quotes by Author Pat Barker, author quotes are always a challenge and fun to pick, with Pat Barker you will find my Ten favorites of Pat Barker’s quotes.

In 1943, Pat Barker, CBE, FRSL, was born in Thornaby-on-Tees. Educated at the London School of Economics, she has taught history and politics.

Among her works are the highly acclaimed Regeneration trilogy; The Eye in the Door, winner of the Guardian Fiction Prize; and The Ghost Road, winner of the Booker Prize. She lives in Durham, England, with her husband.

More from the Author: https://amzn.to/3a05XuT

“It’s the hardest thing in the world to go on being aware of someone else’s pain.”
― Pat Barker

“As later Priam comes secretly to the enemy camp to plead with Achilles for the return of his son Hector’s body, he says: “‘I do what no man before me has ever done, I kiss the hands of the man who killed my son.”
Those words echoed round me, as I stood in the storage hut, surrounded on all sides by the wealth Achilles had plundered from burning cities. I thought: “And I do what countless women before me have been forced to do. I spread my legs for the man who killed my husband and my brothers.”
― Pat Barker, The Silence of the Girls

“Sometimes, in the trenches, you get the sense of something, ancient. One trench we held, it had skulls in the side, embedded, like mushrooms. It was actually easier to believe they were men from Marlborough’s army, than to think they’d been alive a year ago. It was as if all the other wars had distilled themselves into this war, and that made it something you almost can’t challenge. It’s like a very deep voice, saying; ‘Run along, little man, be glad you’ve survived”
― Pat Barker, Regeneration

“Somehow if she’d know the worst parts, she couldn’t have gone on being a haven for him…Men said they didn’t tell their women about France because they didn’t want to worry them. but it was more than that. He needed her ignorance to hide in. Yet, at the same time, he wanted to know and be known as deeply as possible. And the two desires were irreconcilable.”
― Pat Barker, Regeneration

“We are Craiglockhart’s success stories. Look at us. We don’t remember, we don’t feel, we don’t think – at least beyond the confines of what’s needed to do the job. By any proper civilized standard (but what does that mean now?) we are objects of horror. But our nerves are completely steady. And we are still alive.”
― Pat Barker, The Ghost Road

“We’re going to survive–our songs, our stories. They’ll never be able to forget us. Decades after the last man who fought at Troy is dead, their sons will remember the songs their Trojan mothers sang to them. We’ll be in their dreams–and in their worst nightmares too.”
― Pat Barker, The Silence of the Girls

“You know you’re walking around with a mask on, and you desperately want to take it off and you can’t because everybody else thinks it’s your face.”
― Pat Barker, Regeneration

“I don’t think it’s possible to c-call yourself a C-Christian and… and j-just leave out the awkward bits.’ -Wilfred Owen”
― Pat Barker, Regeneration

“Another person’s life, observed from the outside, always has a shape and definition that one’s own life lacks.”
― Pat Barker

“A society that devours its own young deserves no automatic or unquestioning allegiance.”
― Pat Barker, Regeneration

“I thought: Suppose, suppose just once, once, all these centuries, the slippery gods keep their word and Achilles is granted eternal glory in return for his early death under the walls of Troy…? What will they make of us, the people of those unimaginably distant times? One thing I do know: they won’t want the brutal reality of conquest and slavery. They won’t want to be told about the massacres of men and boys, the enslavement of women and girls. They won’t want to know we were living in a rape camp. No, they’ll go for something altogether softer. A love story, perhaps? I just hope they manage to work out who the lovers were.”

― Pat Barker, The Silence of the Girls

More from the Author: https://amzn.to/3a05XuT