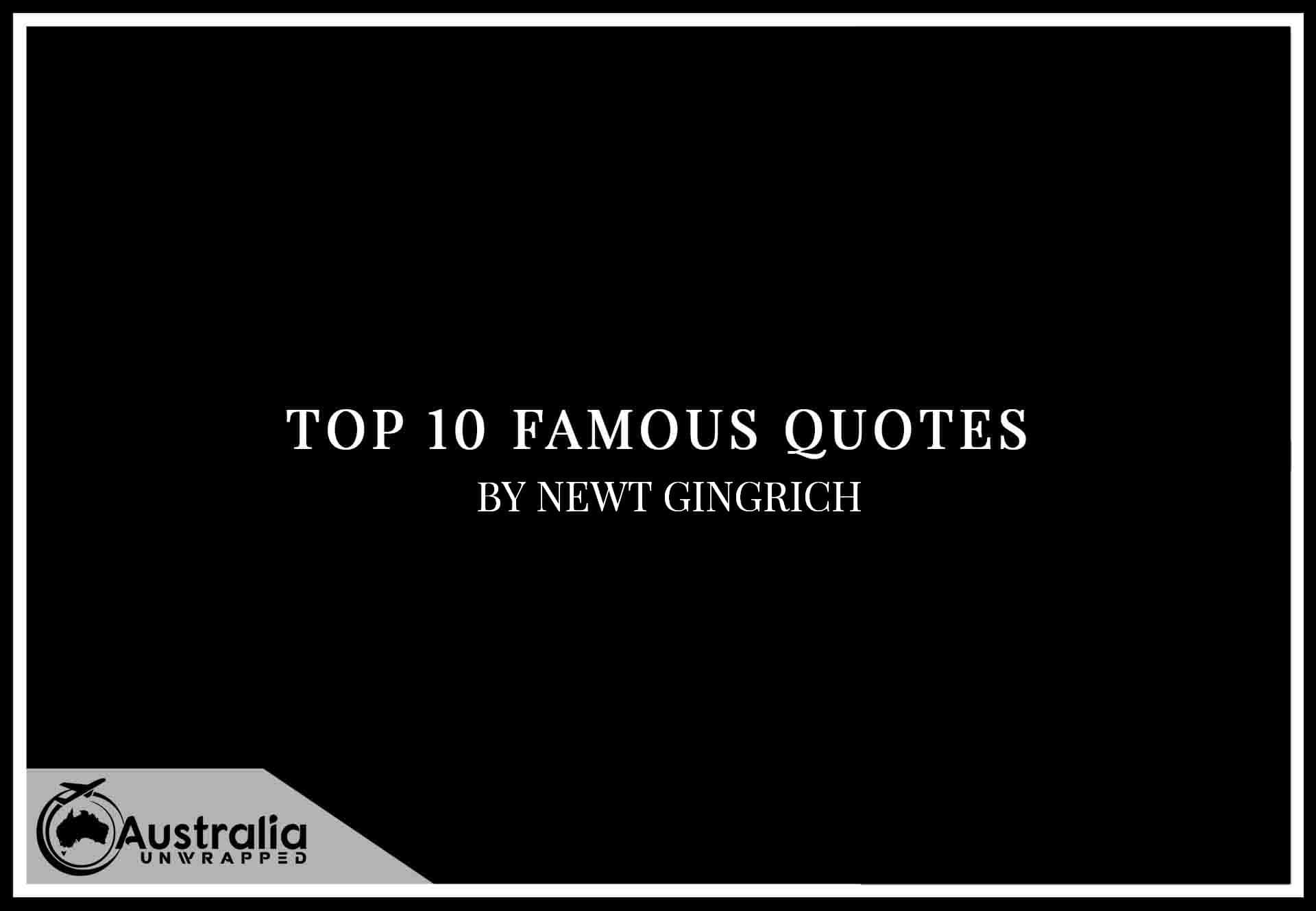 Quotes, who doesn’t love a good quote? This series of articles we look at Top 10 Famous Quotes by Author Newt Gingrich, author quotes are always a challenge and fun to pick, with Newt Gingrich you will find my Ten favorites of Newt Gingrich’s quotes.

As architect of the “Contract with America,” Newt Gingrich led the Republican Party to victory in 1994, capturing a majority in the U.S. House for the first time in 40 years. After he was elected Speaker, he shifted power from Washington to the American people, disrupting the status quo. His leadership enabled Congress to pass welfare reform, the first balanced budget in a generation, and the first tax cut in sixteen years. In addition, Congress restored funding to enhance defense and intelligence capabilities, an action praised later by the bipartisan 9/11 Commission.

Currently, Newt Gingrich contributes to Fox News. He works as a Senior Advisor at Dentons, the world’s largest law firm with more than 6,500 lawyers in 50 countries and offices in more than 125 cities. He advises the firm’s Public Policy and Regulation practice. In addition, he is a Senior Scientist at Gallup.

More from the Author: https://amzn.to/3bcrgtw

“Strange how this war was making them all Americans.”
― Newt Gingrich and William R Forstchen

“that America will never be happy till she gets clear of foreign dominion. Wars, without ceasing, will break out till that period arrives, and the Continent must in the end be conqueror; for though the flame of liberty may sometimes cease to shine, the coal can never expire.”
― Newt Gingrich, To Try Men’s Souls

“Do you men still know how to fight?” he (GW) roared.
A primal cry erupted around him.
“Then fall in and show those redcoats over there” — he pointed back to the advancing British — “how Americans can stand and fight for their freedom!”
― Newt Gingrich, Valley Forge

“A good officer learned to take care of the feet of his men first, and from there their stomachs and hearts. By that means, he could motivate their souls.”
― Newt Gingrich and William R Forstchen, To Try Men’s Souls

“jihadists and yes, we need to identify and stop him before he unifies Islamic terrorists.”
― Newt Gingrich, Duplicity

“Shutting his laptop screen, he said, “Two of our fellow fighters have achieved martyrdom.”
― Newt Gingrich, Treason: A Novel

“Hopefully, Donald Trump is just warming up. There is a lot of swamp to drain.”
― Newt Gingrich, Understanding Trump

“First, Trump and congressional Republicans should abandon Washington’s obsession with comprehensive reform. Health is the largest sector of the American economy — 18 percent of GDP — and the most complex. Comprehensive legislation that affects one-fifth of our economy would be so complicated no one would understand it, and gaining majority support — much less bipartisan support — would be impossible.

Instead, health reform needs a slower-paced, transparent, simultaneous, issue-by-issue legislative approach. A series of hearings must be held to gather information and develop specific reforms that will improve health and health care. These hearings would have geographic as well as topical focuses so different citizens in different regions of the country will understand how the bill will affect them personally.”

More from the Author: https://amzn.to/3bcrgtw