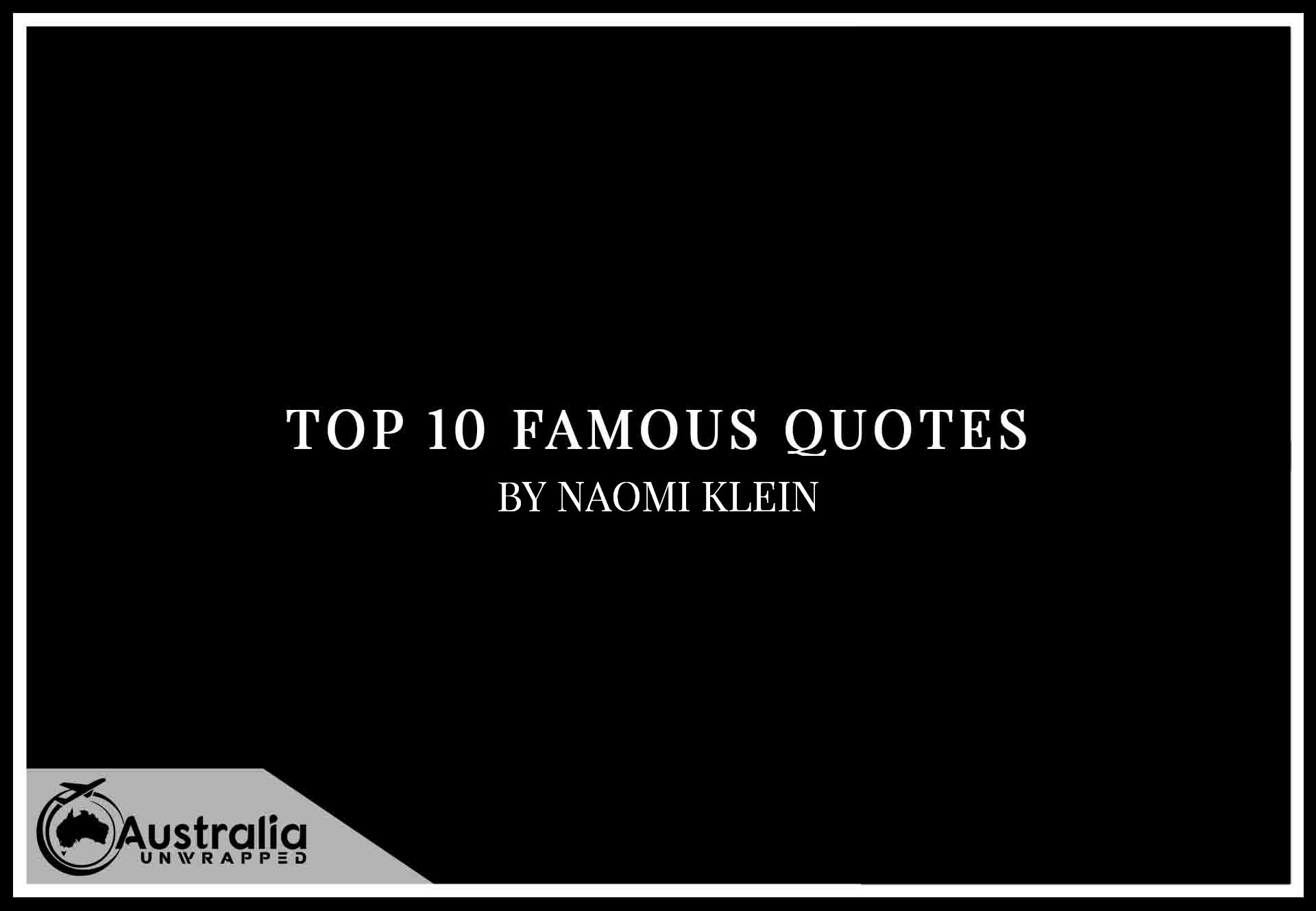 Quotes, who doesn’t love a good quote? This series of articles we look at Top 10 Famous Quotes by Author Naomi Klein, author quotes are always a challenge and fun to pick, with Naomi Klein you will find my Ten favorites of Naomi Klein’s quotes.

Klein is an award-winning journalist, syndicated columnist, documentary filmmaker and author of three international bestsellers, No Logo: The Rise of Disaster Capitalism, The Shock Doctrine: The Rise of Disaster Capitalism, and This Changes Everything: Capitalism vs. the Climate. As a senior correspondent for The Intercept, her work appears in publications including The New York Times, Le Monde, The Guardian and The Nation. The founder of Canada’s Leap Manifesto is a member of the board of directors for climate action group 350.org. The Sydney Peace Prize jury awarded her in November 2016 for inspiring us to demand a new agenda for sharing the planet that respects human rights and equality. Her books have been translated into more than thirty languages.

More from the Author: https://amzn.to/3xHbX3x

“The parties with the most gain never show up on the battlefield.”
― Naomi Klein, The Shock Doctrine: The Rise of Disaster Capitalism

“The widespread abuse of prisoners is a virtually foolproof indication that politicians are trying to impose a system–whether political, religious or economic–that is rejected by large numbers of the people they are ruling. Just as ecologists define ecosystems by the presence of certain “indicator species” of plants and birds, torture is an indicator species of a regime that is engaged in a deeply anti-democratic project, even if that regime happens to have come to power through elections.”
― Naomi Klein, The Shock Doctrine: The Rise of Disaster Capitalism

“Because, underneath all of this is the real truth we have been avoiding: climate change isn’t an “issue” to add to the list of things to worry about, next to health care and taxes. It is a civilizational wake-up call. A powerful message—spoken in the language of fires, floods, droughts, and extinctions—telling us that we need an entirely new economic model and a new way of sharing this planet. Telling us that we need to evolve.”
― Naomi Klein

“our economic system and our planetary system are now at war. Or, more accurately, our economy is at war with many forms of life on earth, including human life. What the climate needs to avoid collapse is a contraction in humanity’s use of resources; what our economic model demands to avoid collapse is unfettered expansion. Only one of these sets of rules can be changed, and it’s not the laws of nature.”
― Naomi Klein, This Changes Everything: Capitalism vs. The Climate

“So we are left with a stark choice: allow climate disruption to change everything about our world, or change pretty much everything about our economy to avoid that fate. But we need to be very clear: because of our decades of collective denial, no gradual, incremental options are now available to us.”
― Naomi Klein, This Changes Everything: Capitalism vs. The Climate

“What we have been living for three decades is frontier capitalism, with the frontier constantly shifting location from crisis to crisis, moving on as soon as the law catches up. ”
― Naomi Klein, The Shock Doctrine: The Rise of Disaster Capitalism

“You actually cannot sell the idea of freedom, democracy, diversity, as if it were a brand attribute and not reality — not at the same time as you’re bombing people, you can’t.”
― Naomi Klein

“When it comes to paying contractors, the sky is the limit; when it comes to financing the basic functions of the state, the coffers are empty.”
― Naomi Klein, The Shock Doctrine: The Rise of Disaster Capitalism

“Extreme violence has a way of preventing us from seeing the interests it serves.”
― Naomi Klein, The Shock Doctrine: The Rise of Disaster Capitalism

“A term like capitalism is incredibly slippery, because there’s such a range of different kinds of market economies. Essentially, what we’ve been debating over—certainly since the Great Depression—is what percentage of a society should be left in the hands of a deregulated market system. And absolutely there are people that are at the far other end of the spectrum that want to communalize all property and abolish private property, but in general the debate is not between capitalism and not capitalism, it’s between what parts of the economy are not suitable to being decided by the profit motive. And I guess that comes from being Canadian, in a way, because we have more parts of our society that we’ve made a social contract to say, ‘That’s not a good place to have the profit motive govern.’ Whereas in the United States, that idea is kind of absent from the discussion. So even something like firefighting—it seems hard for people make an argument that maybe the profit motive isn’t something we want in the firefighting sector, because you don’t want a market for fire. ”

More from the Author: https://amzn.to/3xHbX3x