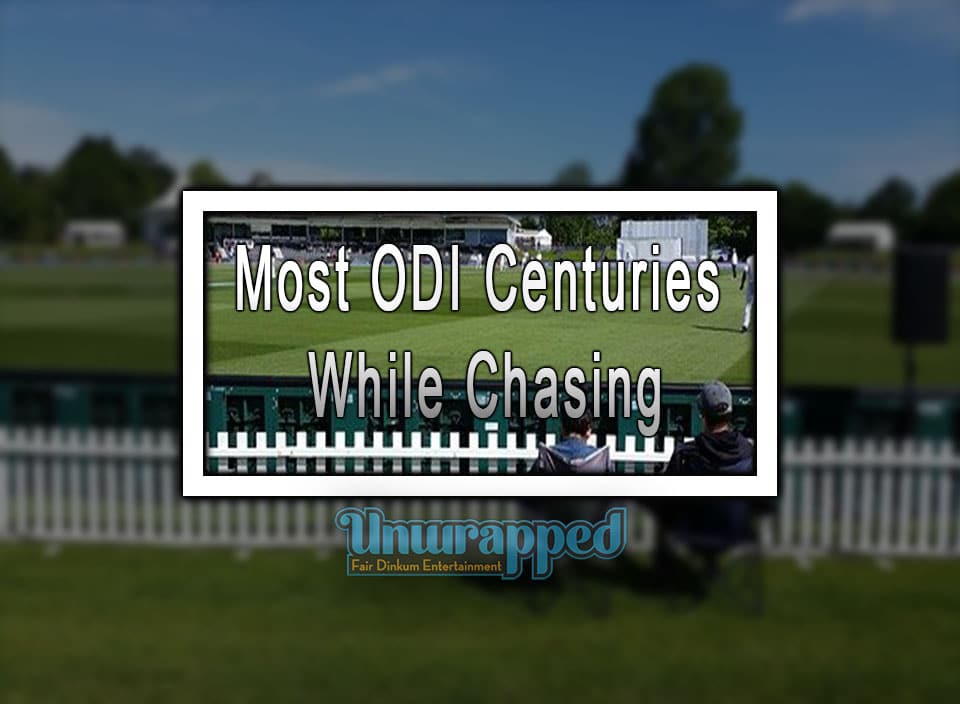 There are many bases for scoring in the game of cricket and one of them is what we call a “century”. A century in cricket is a score of a cricketer who has accumulated about a hundred (100) runs or even more than that in one inning.

It is of note that scoring more than hundreds of runs in one of the hardest formats in cricket games is really a challenge. It is a test of a cricketer’s skill, technique, and concentration. Most players struggle in scoring a century because they have to concentrate on other aspects in an ODI and as well as the pressure they have to deal with in the field, with all the teammates depending on each other, the coaches watching like a hawk, and the fans intense cheering. However, despite the tumult in the field, some cricketers have mastered chasing totals in the field, garnering them huge amounts of centuries.

In this article, we will be talking about the most number of One Day International centuries by cricketers while chasing. This article will also make you astonished by the unbeatable skills of every cricketer on this list.

This Indian cricketer and captain, Virat Kohli, has got to be the God-tier cricketer of all time. He is also considered the backbone of the Indian team in cricket. He has mastered the art of earning centuries in cricket while chasing in the field. Ever since his debut, Virat had played a total of 248 matches which is about 239 innings with 43 centuries and 58 half-centuries. Against Pakistan, his best score was 183 back in the 2012 Asia Cup.

Out of the 43 One Day International centuries he has had, he garnered 26 of them while chasing in the second innings during the match. Virat Kohli’s record is the highest century record in the world of cricket.

Next on this list is another Indian cricketer named Sachin Tendulkar or also known as the “Master Blaster” and this legend of a cricketer became one of the crowd’s favorite ace in cricket. He started his debut as a One Day International cricket player back in November 1989 in the format against the Pakistan cricket team. After his opening in the ODI match with Sourav Ganguly, he becomes one of the most renowned batsmen in cricket.

Another Indian cricketer takes the podium by garnering one of the highest centuries in cricket. Rohit Sharma is one of the best white-ball cricket players right now even if his career faced some highs and lows. It was during 2013 that his career soared higher when his score during this One Day International match has become higher than his previous matches. Sharma became India’s ace because of his consistency in putting his country, India, at the highest podium in every international match. In his career as a cricketer, he has played over 224 matches which is equivalent to 217 innings, with a total of 9115 runs, and this includes 3 double centuries, which is a total record-breaker. Since then, his score is unbeatable and is the highest individual score that is recorded in One Day International matches, up until today.

Rohit Sharma was also known as a threat in the field by his opponents because of his ability to put them under so much pressure, and, of course, he is pretty much the most formidable batsman so opponents must always take a watchful eye whenever Rohit Sharma graces them with his presence in the field, in which in all honesty, is overwhelming and very powerful.

Rohit Sharma has gained three-figure scores more than 14 times in his career while chasing in the One Day International matches. His constant ability in scoring centuries so easily puts the following cricketers after him under a great deal of pressure.

West Indian cricketer takes fourth place on this list as the cricketer who had garnered the most centuries in a One Day International match while chasing. Chris Gayle is one of the best left-handed batsmen that played with a total of 301 matches, equivalent to 294 innings. He also scored a whopping 10, 480 runs with a total of 25 centuries and 54 half-centuries. He became known as one of the best batsmen to ever score double centuries in ODI matches along with other cricketers, Sehwag, Sachin Tendulkar, Rohit Sharma, and Fakhar Zaman.

His best score in an ODI match amounts to 215 and this was against the Zimbibian cricket team back in the 2015 World Cup that was held in Australia and New Zealand.

He was not too far behind the other cricketer on the list with the number of centuries he accumulated in the games. Overall, in his career, he has had 11 centuries in One Day International matches while chasing in the field.

And now, for the last entry in this article, is Sri Lankan, explosive left-handed batsman, Sanath Jayasuriya. He is one of the cricketers who scored the most number of One Day International centuries while chasing in the field. He started his journey by taking the international format for cricket back on December 26, 1989, and this was during the ODI of Sri Lanka against Australia.

He has played 28 centuries, and out of all the matches, he scored 10 centuries while chasing. He ended his One Day International career on June 28, 2011, against the English cricket team with a grand power hit, which created an impact on the world and in cricket.

To conclude this article, I must say, these cricketers are straight-up, powerhouses and they are superhumans. They have incredible skills, discipline, temperament, and concentration. It takes so much willpower to be able to garner such enormous digits of a score in the world of cricket. This article just proves why they are one of the top cricketers in the world and they deserve recognition for all the hard work and effort they pour into their games, and their incredible sportsmanship.

This article also shows the great influence of each cricketer on one another. They have a healthy competition against each other, triggering them to always do better day by day and try to make new records, challenging others, and themselves, and marking a history to the world. Their legacy will remain with the help of fans and the neophyte cricketers who want to follow in their idols’ footsteps. However, it is plain and simple to say that there can only be one of them and they have set the bar for being one of the best cricketers pretty high. Which puts the next generation of cricketers under pressure.

Stay Connected
52,693FansLike
5,665FollowersFollow
828FollowersFollow
Previous articleDo Female Cricketers Wear a Box? | The Logic Of It Will Leave You Dumbstruck!!
Next articleWhy the Australian National Cricket is So Successful